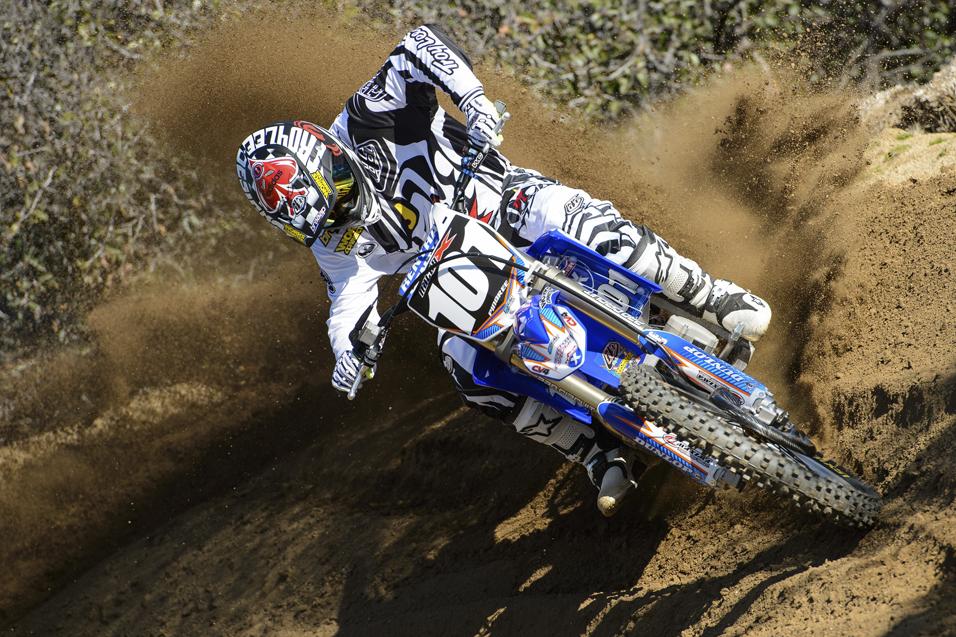 I recently saw on TV Kyle Cunningham pass and dangerously (IMO) whip it right in front of Adam C.. I am sure a lot of current racers lament the fact the Adam C is getting a lot of pub at his young age and a receiving a long term contract by Mitch Payton.  My question is: Is passing a dude and whipping it right in his face the ultimate diss and demonstration of disrespect in motocross? I would compare it to dunking over a guy in B-ball and walking over him while he lies on the hardwood. (YouTube Deandre Jordan Dunk)

The pass-then-whip-in-your-face move is basically a giant middle finger to the fellow racer you are moving past. Its one thing if you scrub the crap out of a jump to pull alongside someone and make a pass…nothing wrong with that. In fact, that is completely awesome. But a whip, or worse a whip with a look back, is rude and absolutely reserving of a retaliatory t-bone in the following turn in my book. It is also incredibly dangerous when guys are racing that closely. I mean, not as dangerous as shining lasers into people’s eyes, but, you know, pretty dangerous.

I love Ask Ping and EP. Never forget the Electronic Ping about the "ping pong"… hilarious. So today I have to vent and you are the first person I thought of. Be proud! Anyway, after missing Washougal today I am officially fed up with MX TV coverage. Why can't they pick a freaking name and use it? I work weekends and rely on my DVR to catch the races. However, they're always titled something different and air on different channels. What time? Is it taped or live? Is it called AMA Motocross, Lucas Oil Motocross World Championship, or Sports Spectacular? Is it on SPEED, Fuel, NBC Sports, or CBS? I am sick and tired of missing races because of the different names and channels. I never miss MotoGP and neither does my DVR no matter what channel it's on, because it's called MotoGP, my DVR figures it out. I know motocross will probably never have NFL ratings, but I'd be willing to bet if it was called.... I don't know.... AMA Motocross, maybe more people would find it and watch it. Is this concept over the heads of TV execs?

I have Netflix so I’m totally out of luck when it comes to watching these things live. They bounce around between channels a lot, from what I understand, but they are always live on the web and TV. Kill two birds by taking your wife out to a nice lunch at someplace fancy and then stare at your phone the entire time watching the races and following the Racer X Twitter feed. I’m sure that will end well for you.

I can’t get enough of “Lasergate.” Can you tell me what your thoughts are on the latest Alessi debacle?

It hasn’t even been a week and I don’t ever want to hear another thing about it. When I first heard about it I couldn’t help but think it made our sport look a little silly. A laser light, really? Other sports are battling drugs [performance enhancing and otherwise], alcohol abuse, spousal abuse, suicide, etc. And have a gangly kid from Victorville shining lights in rider’s eyes? The whole thing seems silly to me. Look, what he did was stupid. He knows it, we know it and Mike is going to pay for it. From what I gather there are folks who want to go all Brazilian soccer fan on Jeff and mount his head on a stick at the top of horsepower hill. Let’s all take it down a notch though. He is a kid who did something stupid. If there is anybody out there who didn’t do something stupid when they were a kid, by all means feel free to keep berating Jeff. Otherwise, let’s move on and get back to the racing at Millville this weekend.