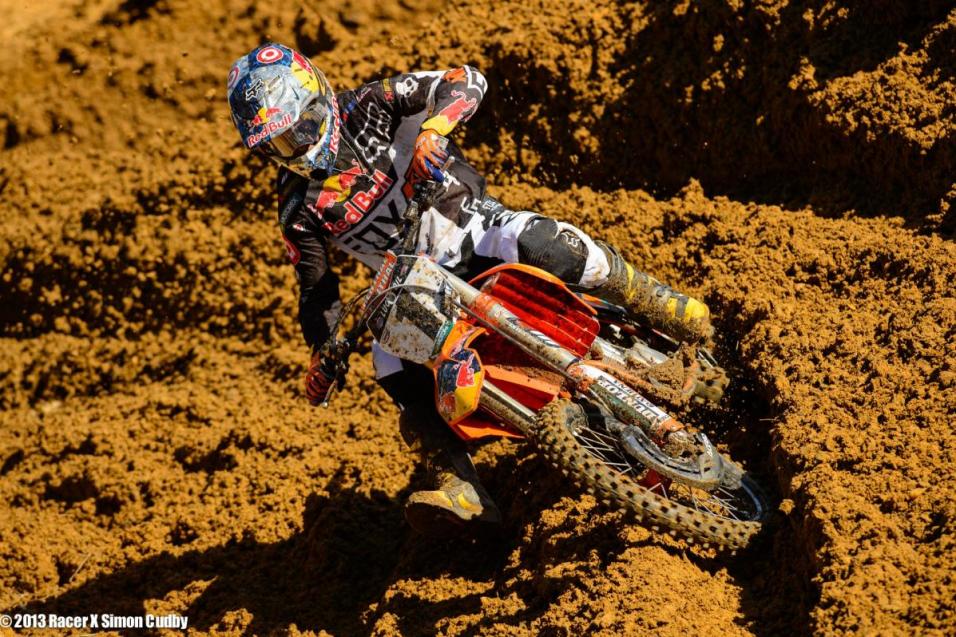 Mike Alessi earned another MotorcycleSuperstore.com holeshot award in the second moto, but Ryan Dungey was only a couple wheel-lengths off of his lead. Dungey was able to take command of the lead shortly after the first step-up jump. First moto winner Ryan Villopoto wasn’t buried in the pack, but sitting around tenth isn’t the position you want to be in when your toughest competitor is out front extending his lead.

James Stewart was also floating around tenth after the start. Villopoto and Stewart diced for a couple laps until Villopoto turned up the heat and dropped Stewart like a bad habit. Villopoto made it into second place ten minutes into the race, but Dungey had already opened up a 15-second gap. Villopoto needed to put in a ride of a lifetime if he wanted to take home the overall win. Stewart steadily worked his way up to fourth, and then inherited third when Alessi swapped out and went down on the side of the signal area straightaway. Alessi rode without a clutch lever for several laps before succumbing to a DNF.

Then Malcolm Stewart came out of nowhere. Malcolm pulled up into fourth and latched on to his older brother’s pace. Malcolm must have found an edge somewhere because he was right up on James after just a few laps. Chatter started up in the mechanics area as Malcolm reeled in James, but the battle between brothers never materialized. James went down in the rollers before the finish line. Malcolm rode unchallenged to a third-place finish—his best 450 finish to date—while Villopoto settled in second. Dungey took the second moto win, which also gave him his second overall win of the season.