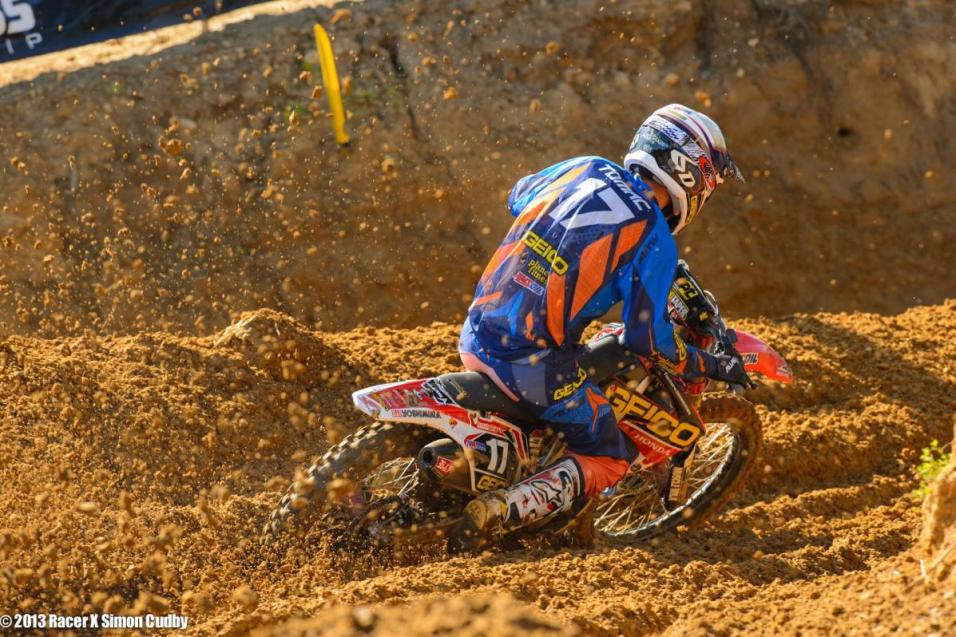 As flawless as Blake Baggett’s first moto come from behind win in the first moto was, Eli Tomac may have topped it in moto 2. But it was Tomac’s GEICO Honda teammate Wil Hahn who secured the Motorcycle-Superstore.com holeshot—his second of the day. Hahn was joined up front by Monster Energy/Pro Circuit Kawasaki stablemates Darryn Durham and Blake Baggett.

Durham, who has struggled with injuries for the better part of past season, quickly took away the lead from Hahn—the first time he has lead a race since High Point in 2011. After a nearly flawless first moto performance it appeared Baggett would dispose of Durham and runaway with a 1-1 performance. But Durham held his ground, keeping Baggett at bay for the first half of the moto using a smooth line through the rollers to help provide distance.

With Durham and Baggett trading blows up front Eli Tomac was making a charge for the ages through the pack. After another bad start left him outside the top ten, Tomac began to click off lap times that were at points two and three seconds faster than the leaders. After trimming Durham’s lead to within seconds late in the race Tomac struck quickly, first passing Baggett and then disposing of Durham. Tomac would take the moto win with Baggett taking second following a late pass on Durham.