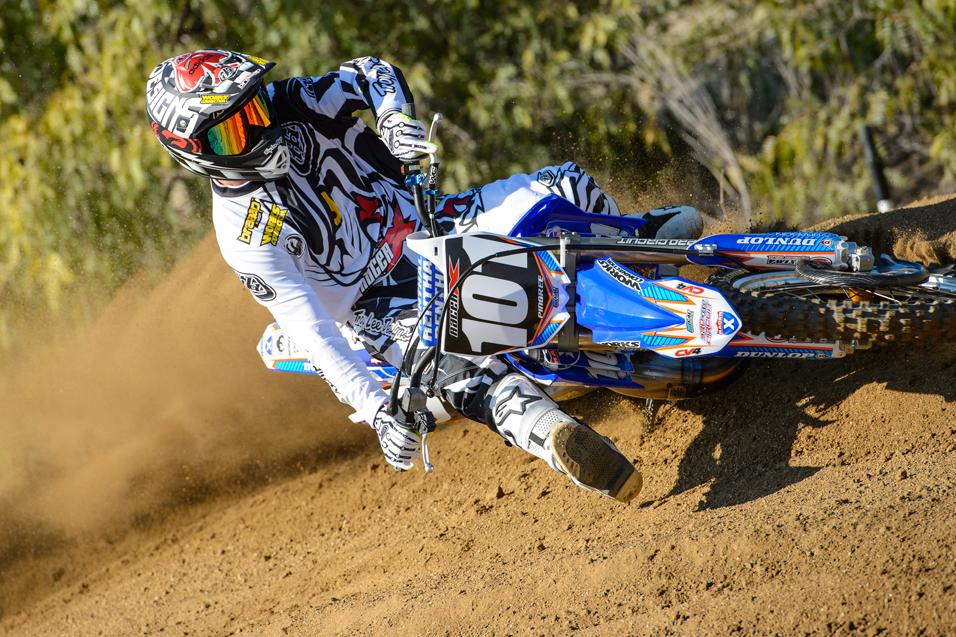 I have been wondering about this for some time, and as a former SX racer, perhaps you can shed some light on this for me. It doesn't happen all of the time, but from time to time, I will see some guys that are in a close battle go over a double or triple together, and, this being current generation SX racing, scrub or whip big in an attempt to get an advantage. These guys are often so close to each other that if one guy scrubs right, and the other scrubs left, a mid-air collision is definitely going to be the result. But invariably, they always seems to scrub the same direction, or, not at all. Is this dumb luck? Instinct? Some sort of rider code? I would be quite interested in your thoughts on this.

Thanks, and keep up the funny stuff,

That’s a great question, Peter. Fortunately I didn’t have to worry about it back when I was racing but it needs to be in the back of your mind now. Most of the time riders are going to scrub a jump in the same direction based on where the obstacle is in the track. If it’s a triple out of a left-hand turn riders will ride up the transition aiming slightly right and then scrub to the left. This allows them to carry more speed through the turn and not worry about getting completely straight for the jump. As they turn down off the lip the gyroscopic effect of the engine and wheels will bring the bike back to the left and also send their trajectory forward instead of up. So, if the track sends every rider toward an obstacle at a common angle most of them are going to scrub the same direction. The tricky part comes when the jump being scrubbed is at the end of a straight or the riders are hitting it straight-on. At that point it could go either way and that is really scary. Have you ever seen the video of this going badly for Malcolm Stewart and his buddy? It is sketchy.

There is some situational awareness that the racers have and they can often times predict which way the other rider is going to scrub based on where they are on the jump face. We’ve been really lucky so far and haven’t had any big crashes in pro racing with this but I think it’s only a matter of time until it bites somebody.

I have recently taking a predilection to Supercross and I'm glued to the set every Saturday night. I'm also an avid reader of literary satires. Why would an established and successful actor such as Ryan Gosling, aka Will Hahn, take a leap of faith mounting that dangerous motorbike every weekend? My girlfriend and her hairdresser Stephan loved Ryan in the Notebook and feel like he's jeopardizing his movie career as well as his dapper appearance racing Supercross. Your input would be greatly appreciated as we are perplexed regarding this matter.

Wow, I know Wil is currently leading the East Region supercross points chase but this might be the best thing that has ever happened to him. While being compared to Ryan Gosling by another man could be construed as super-weird, the same compliment from a woman is the highest honor a man can receive. According to every gossip rag and just about every single woman who has ever seen The Notebook a simple glance at Gosling can very nearly bring a woman to climax. So if Wilbur can tap into that vibe he’s going to be just fine, championship or otherwise. From the pictures provided I would say Wil is a good haircut, a v-neck shirt and a necklace away from being a Gosling Doppelganger.

Perhaps you can shed some light on why some of the top pro motocrossers roll up their sleeves while racing. I'm not sure if it is a problem with the jersey being too constrictive on the wrists for some of the guys. In the past we have seen some riders cut the cuffs from the sleeves.  I've seen recent pictures of Jeff Ward, Mike Alessi and Ryan Hughes with the sleeves up to the forearms and thought that you may be able to give a reasonable explanation to this question.

Also, any word on the all but forgotten low emission Honda EPX 2 two-stroke that was being developed years ago?

Eternally grateful seems a bit exaggerated. How about we shoot for being thankful for a week or so? The most common reason is that some riders think having something around their wrist causes arm pump. Keep in mind these are guys who are probably going to get arm pump no matter what they do to their sleeves. If you have something really tight around your wrist it could impede blood flow and exacerbate an arm pump issue but it would have to be extra tight. Some older jerseys from the 1990s had tight cuffs at the wrist and a few guys cut them off [Wardy, Ryno, etc]. The AMA implemented a rule that riders cannot cut their jerseys so you won’t see much of that anymore. Doesn’t matter; it would be a more effective arm pump cure to just cut your arms off at the elbows.

I haven’t heard anything about a Honda two-stroke but I know that Suzuki has a very successful two-cycle FI engine that they use for marine applications. Honda chose the direction they wanted to go and it doesn’t include premix, sadly.