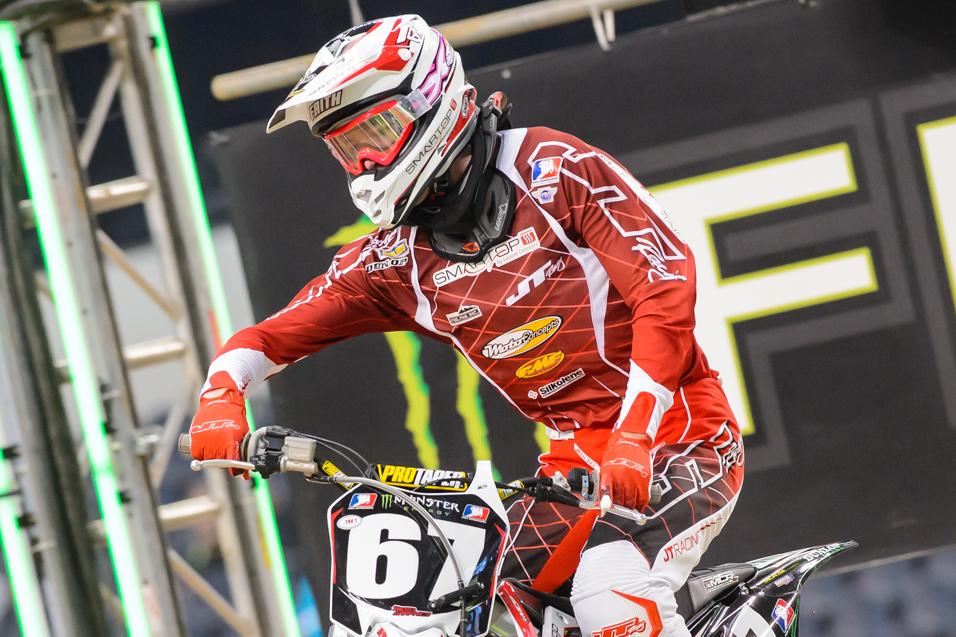 Advertisement | Advertise with Us
Georgia Dome Atlanta, GA Atlanta Monster Energy AMA Supercross Championship
Following a 2012 rookie season consisting of two fill-in rides (GEICO Honda and JGR/Toyota Yamaha) and a privateer ride, Gavin Faith found stability after signing with MotoConcepts Smartop for 2013 following his first career professional championship in the Australian Supercross series. Faith shook the landscape at the opener with an impressive heat race win over Wil Hahn and Marvin Musquin. A bad start in the main relegated the soft-spoken Iowa native to seventh in the main, but the groundwork had been laid—Faith will be a podium threat in 2013.

Racer X: Spectacular ride in the first heat race, holding off Wil Hahn and Marvin Musquin for the win. Did you know you had that in you before the season?
Gavin Faith:
I’m sure a lot of people think that they have it in them… I didn’t go around telling people that I could run with those guys, but deep down I feel like I have the speed to run with those guys. I was really out there to prove a point and open up some eyes. It was a nice little battle we had there in the first heat race, it was fun.

That has to have been a huge confidence booster. Do you see yourself now as a contender? A guy that can win races and be a consistent podium threat?
I would like to think I can. I’ve proved to myself and other people that I have the speed to run up front, now it’s a matter of putting it all together. After a couple fill-in rides with GEICO Honda and JGR/Toyota Yamaha last season, what does it mean to have a solid foundation with MotoConcepts this year?
I think it’s a big help, especially because I had a lot of time on the bike before the season. The GEICO and JGR bikes were awesome, I just didn’t get a lot of time on them to feel real comfortable on the bike. I have a good foundation here and everything is going well.

For the second straight season, you went to Australia to compete in the Australian Supercross series, leaving with the MX2 title this time. After not competing in Lucas Oil Pro Motocross last year, how important was it to go down there and get back into race mode?
After supercross last year we kind of figured out what we needed to work on after my rookie year, and Australia was kind of the test to see how much I’ve improved. It was also a good prerace for America. They do qualifiers, heat races and the main events, just like they do over here. You can practice heat races and main events but until you are actually racing guys it’s different. It was definitely a nice warm up.

You raced the 450 in the East last year as a privateer after your fill-in ride for GEICO. How much do you think that, 1) it helped you at Dallas, and 2) provided familiarity with the dirt and the tracks and knowing what the East provides?
The big thing was getting more races under my belt last year. I rode four races with GEICO last year and that was pretty much it with the 250. So we figured we would go out and get as much experience as possible and try and open some eyes as a privateer in the 450 class. All in all it was great to be able to go to all the different venues and get that experience.

You have Tony Alessi on board as team manager this year. Tony has been around the sport for quite some time now, what have you been able to learn from him about being prepared and racing in general?
Yeah, Tony helps out quite a bit. It’s been really good. The whole team has been great. The first round went well and everyone at MotoConcepts was happy so we’ll keep moving forward and trying to progress. 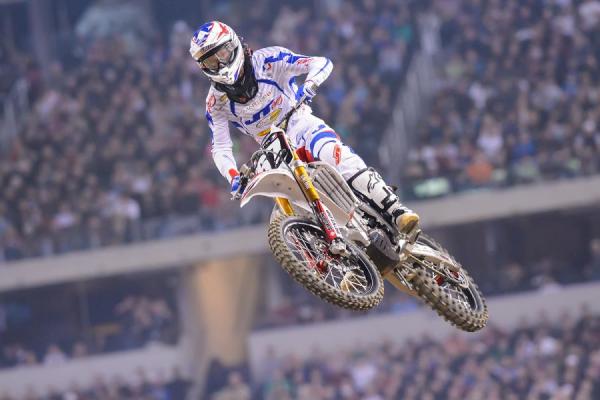 Faith is hoping he can be a podium contender in 2013.
Simon Cudby photo

Dean [Wilson] looked pretty fast and confident at the opener. What do you think it’s going to take to beat him?
He seemed like he was a little step ahead of everybody in Dallas. I don’t know, my goal for the rest of the season is to get on the box and get a better start in the main. What happens after that happens. I’m just looking forward to running up front and just trying to run Dean’s pace, as well as Hahn’s, Musquin’s and Wharton’s.

A lot of riders will say, “I really need to get up front and see the leader’s pace.” But sometimes that doesn’t happen until later in the season. You got your experience in the first race. Does that help you going forward knowing right out of the gate where you need to be?
Yeah, definitely. It was a pretty big confidence booster for myself and the team. It’s nice to do it the first race, because now I know what I need to work on to run up front instead of waiting until the fifth round or so to run up front. So it was good to get that experience early so I can get to work and keep improving.

Thanks, Gavin. Who would you like to thank for helping you out this season?
I want to thank everyone at the Smartop MotoConcepts MCR team, JT Racing, FMF, Dunlop, X Brand Goggles, everyone at MTF and EVS Sports.