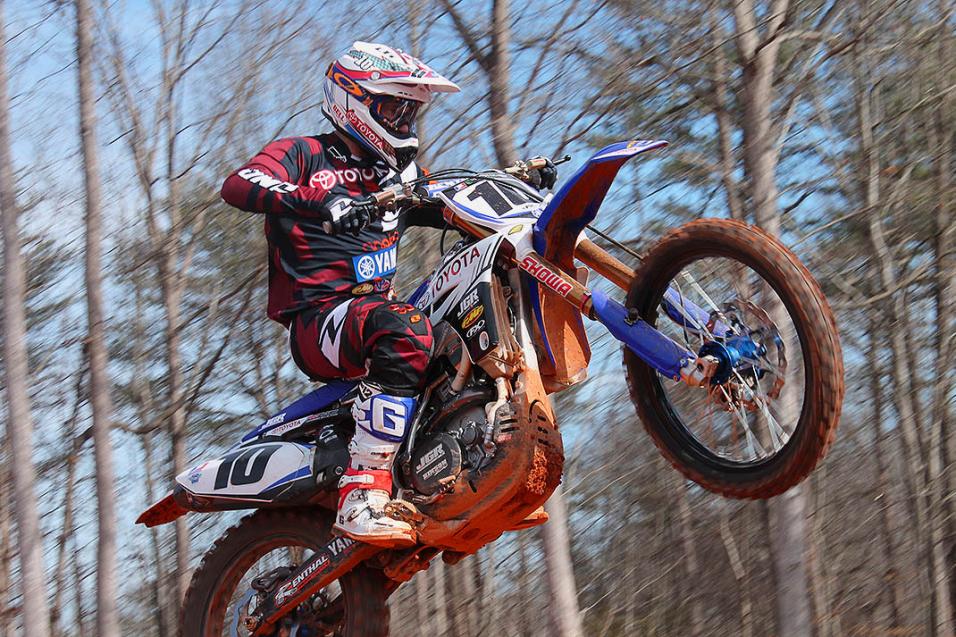 February 21, 2013 11:30am
by: Jason Weigandt
“This is the third loop with this front tire,” says Pirelli North American Off Road Manager Josh Whitmire. “We spent a lot of time in the off-season with the rears, but we’re always working on fronts. We’re going to try something new that can race this weekend in Atlanta.”

“Loop” is Pirelli’s term for each version of a new front tire. This is the third generation of a prototype tire, and when the brand’s main research and development partner, JGRMX, decides they’ve finally found the perfect front, that tire will go into production. Thanks to the R&D learned in the first two loops of this tire, this third-gen test will be a little simpler. They know what direction they want to go; now they’re into the details.

It’s a Wednesday at the JGR test track in Mooresville, North Carolina, and it rained yesterday. But track builder Mark Barnett recently redesigned the track, so it’s fresh. The track is well engineered for drainage—the entire track is elevated above the natural surface (even the bottom of each jump transition sits about three feet higher than the ground) and there’s an elaborate drainage system, too. Wednesday sun does the rest, and Justin Brayton is able to roll out on his YZ450F and cut laps early in the afternoon. First, Brayton goes out on his current race tire to make some baseline notes. He cuts lap after lap to put some lines into the fresh track. Then he heads to the shop so they can swap in a new front. 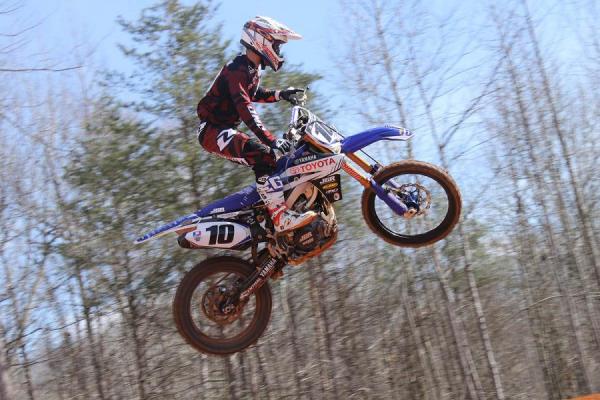 Brayton starts the day churning laps on the tire he races with each weekend. 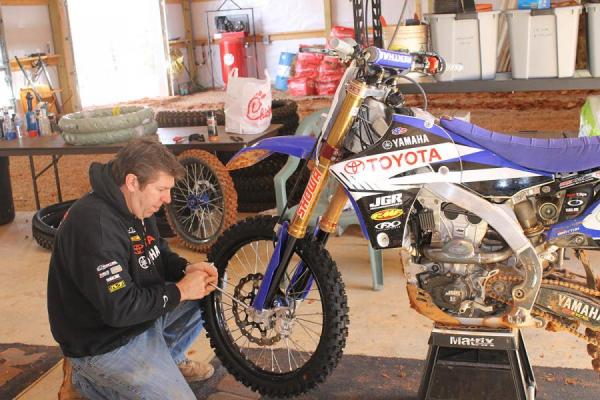 Then JGR R&D man Spencer Bloomer steps in to put on the new hoop. 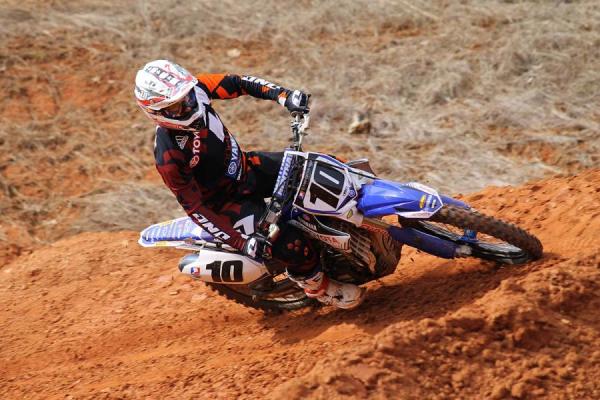 Brayton then logs more laps. Pirelli has been working on stiffer sidewalls and knobs, which pays off in corners like this.
Weigandt photos

The SX tracks this year have been pretty hard and slick, so you’d think traction is the main issue here. But Brayton and the rest of the Pirelli-shod riders have been satisfied with grip. (The other Pirelli riders include JGR teammate Josh Grant, and BTOSports KTM’s Matt Goerke. Kyle Chisholm is riding for JGR while Grant is out with an injury. And now Andrew Short is on board with BTO, and he was trying tires in California this week.) For Brayton, this test session will be as much about the tire’s impact on suspension performance and feel as traction.

Tire companies are always chasing a moving target. For one, track surfaces are constantly evolving. East races like Atlanta and Indianapolis used to be known as rutted, tacky, sticky affairs. Often now, they’ve become dried out, hard and slick. Tat Kimsey, Pirelli’s MX/SX technician, notes that a Monster Jam event just took place in the Georgia Dome, so the dirt has been sitting in the building for awhile, getting drier and drier.

Today, Pirelli has a few new front tires, and each will help determine what direction they ultimately want to go. Brayton does a bunch of laps on the first new tire. He likes it, but during the debriefing with Kimsey and Whitmire, he says it feels much different. “With the tire we’ve been running, you can feel the rut in those whoops,” he says. “With this new one, you can’t feel anything. It’s not quite wallowy or mushy, but I just don’t even feel the rut.”

Brayton is sensitive to how a front tire works in ruts—he tends to run a narrower front tire because of this. Three years ago, JGR was testing with Pirelli in anticipation of switching to the brand for the 2010 season. The tires worked well, but Brayton and the team weren’t sure about the selection of narrow fronts at the time, so they stuck with Dunlops. For 2011, the team switched to Pirelli, and Brayton and Davi Millsaps worked hard in tire testing to help them develop a new generation of tire (Whitmire says the production Pirelli tires now are based on what they learned from Millsaps over the last two years).

When JGR brought James Stewart on board in ’12, Pirelli stepped their program up further. They were working so quickly, they were literally stopping their production line in Brazil, producing prototype tires, and overnight shipping them (from Brazil) to California. The cost for that shipping bill? 60k! Another time, Kimsey was testing in California, and needed to try a tire that was back at Pirelli’s U.S. HQ in Georgia. So he sent his son to the airport with two plane tickets—one from California to Atlanta, and then another one to come back, in the same day. “He flew home, grabbed the tire, and went right back to the airport,” he says.

“It got to the point where we were literally going to airports and buying tickets at the counter,” says Whitmire, as they tried to race on the West Coast, work in Atlanta, and produce in Brazil (the tires Brayton was testing on this day even had shipping tags in Portuguese, the native language of Brazil). 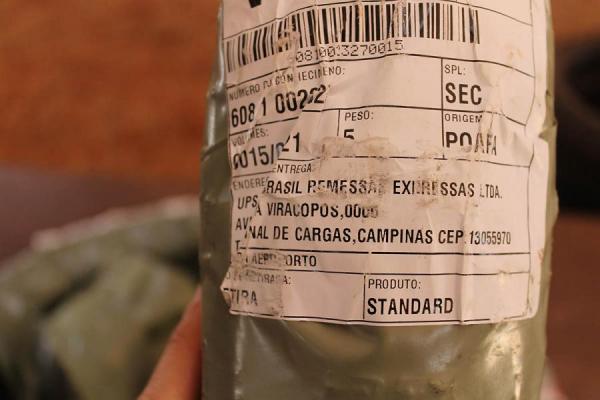 Straight out of 'Brazil! 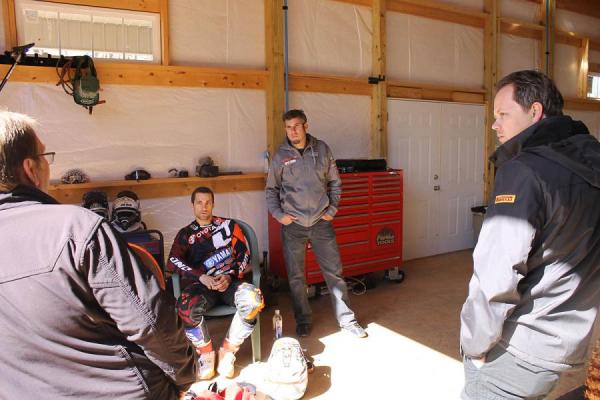 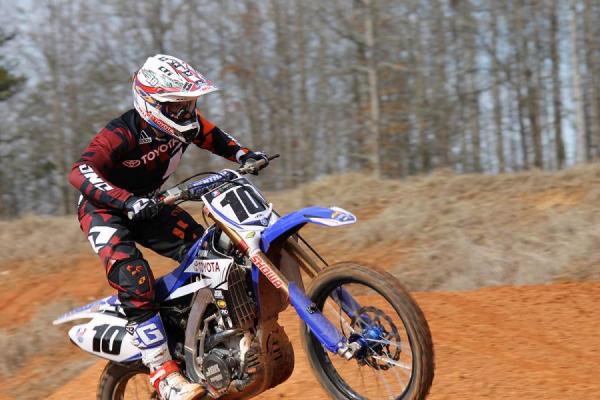 Then it's back to more test laps.
Weigandt photos

They also spent a ton of time at Stewart’s compound in Florida. At one point, Stewart even joked that Kimsey had pretty much just moved into his house. It has been a lot of work, but there’s a reason. Globally, Pirelli is known as a high-end tire maker, and they’re the official spec tire of Formula 1 and World Super Bike. They’ve also had great success in motocross on the GP circuit, with Jeffrey Herlings and Tony Cairoli bringing home the 2012 MX2 and MX1 titles on the tires.

In all, Pirelli has produced a staggering 720,000 racing tires for series around the world. But they’ve been considered a bit player in Supercross compared to traditional powerhouses like Dunlop and Bridgestone. With JGR and BTO, they have a chance to prove their worth. They’ve even developed a relationship on the amateur end with JGR, as just last week, the team announced that they’re handling Pirelli amateur support, and have begun accepting resumes. 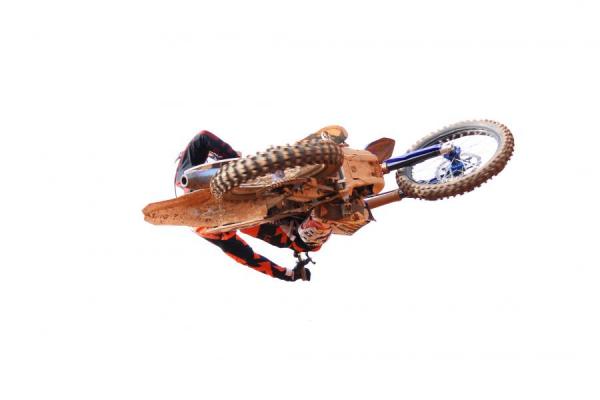 Brayton giving us a good view of the tires.
Weigandt photo

The hope is that the lessons Pirelli has learned working with Stewart and Millsaps in the past, and with Brayton, Grant and the BTO riders now, will help improve the product.

Brayton rolls out on another new tire, and this time he finds what he likes. “I feel like I can drive into the turn in so much harder,” he says. “I was driving in extra hard on purpose and it just stuck.”

“The tires we have been working on now have extra-stiff sidewalls, and a lot of work going into reducing flex in the knobs,” says Whitmire. They can bake a little flexibility back in via the rubber compound, but overall, Brayton seems to like the stiffer design. He goes back to the old tire just to be sure, then tries the new one again. He selects the new one for Atlanta. Today, the team will ride for press day in the Georgia Dome, so Brayton will try it again. If all goes to plan, he’ll race with the new tire on Saturday, another step forward in the evolution of the program.
Read Now
November 2020 Issue Now Available