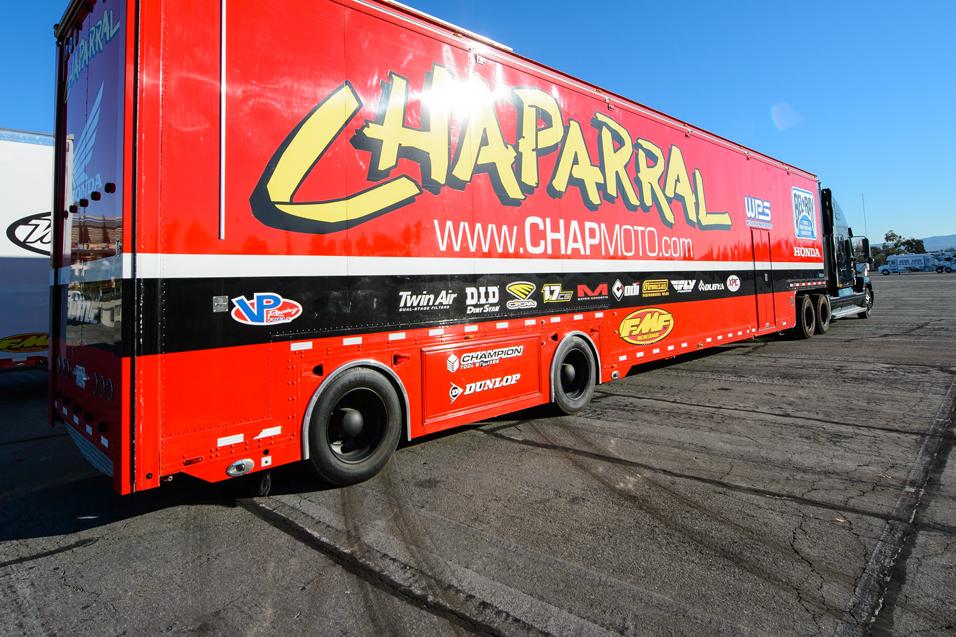 Redux Bringing In Outside Money

Let me make one thing clear: All the teams that have recently folded or contracted, be it Jeff Ward Racing, L&Mc Racing, J-Star/JDR KTM or Langston-Witt Racing, were answering questions no one asked. No one begged Larry Brooks to start a fifth Honda team, or JDR to add a couple of extra KTM squads to the pits. Kawasaki has a good thing going via the factory effort and Pro Circuit, so it’s not like Jeff Ward Racing had to be there.

But the sport would be better with them around. More teams mean more jobs and better competition (if JWR were still around, Dean Wilson would be racing a 450 right now). While factory efforts still look strong, bike sales and general OEM budgets are a fraction of what they used to be. Plus, those companies learned so many lessons during this downturn that they’ll probably never go back to their old spending habits. If the sport is going to grow, then independent teams must survive—and not just because a rich owner is willing to lose money on the operation.

I needed some answers. So I headed over to the JGRMX shop and asked their Vice President of Marketing, David Evans, what he thought. Evans is the man behind JGR’s sponsorship proposals today, but a dozen years ago, he helped broker the deal between Chevy Trucks and Kawasaki, and later, as James Stewart’s agent at the time, he was part of the picture when Monster Energy joined the factory team. He’s seen a massive change since then. 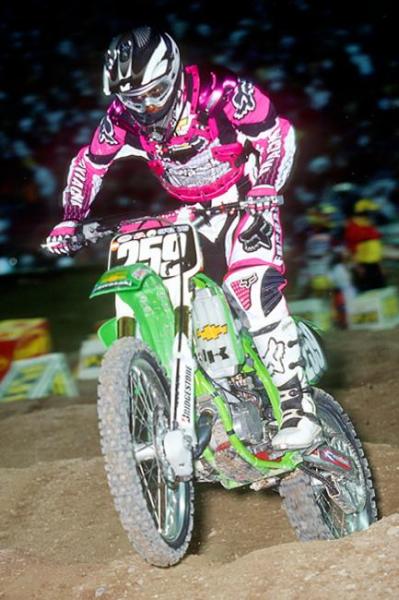 “It’s changed for everyone, not just motocross teams,” he explains. “Before, if you could find a company that was a good fit with your sport, you could make a pitch—and that would be a PowerPoint presentation with some basic information about the sport—you could get sponsorship. Now that was actually harder than it sounds, but it wasn’t nearly as difficult as it is now. Today, you need a much more scientific approach, and more numbers. And when you’re talking about motocross, I think we all agree it should be bigger, but at the same time, we should also be happy that it’s as big as it is. But when the sport is this size, when you think of a really big company, like a Coca-Cola, compared to what they’re usually investing in, this sport is not that big. But at the same time, we have a very niche market with a young, male demographic, and that group is known for being very picky and very hard to win over. So this sport could be the right place to be for the right company, but you have to be much more scientific now. You need to prove to them that this is exactly where there market is, and why your team or series can add value to that.”

Once you add that scientific approach, you add a ton of extra work. The JGR team has put together an incredibly detailed sponsorship plan that details any possible mention or view of a team logo. This type of work is not the stuff in which motocross teams are traditionally built. Most often, a team starts with a gear head that knows how to get results, or make bikes go fast. The business of procuring sponsors isn’t in the toolbox.

And once you get them, the Gibbs crew points out that keeping them is just as much work, they all expect huge attention and activation. When the L&M team was getting San Manuel money, they literally used some of that money to build a staff to maintain the relationship—it’s worth paying someone $50,000 a year to keep an eye on a $3 Million deal. But when you don’t have that sponsor in the first place, it’s hard to hire someone for that spot.

Of course, you’re only building that proposal on the chance opportunity of actually getting a meeting with a potential sponsor. 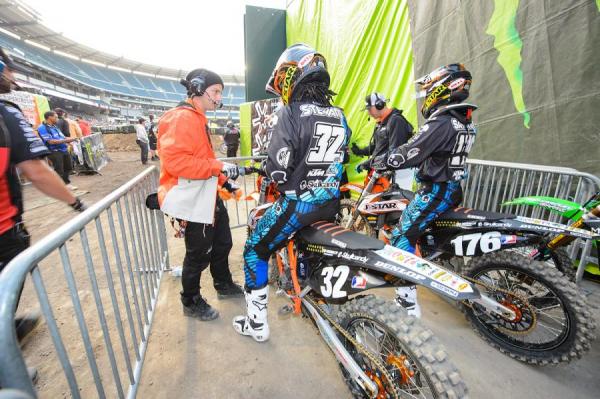 J-Star/JDR KTM riders Malcolm Stewart (left) and Joey Savatgy (right) could be looking for rides after supercross unless a major sponsor steps in.
Simon Cudby photo

“The number one thing we’re usually up against is educating them on what the sport even is,” says Coy Gibbs. “We spend so much time explaining it—they literally have never even seen it or heard of it. That’s the biggest obstacle.”

There’s always luck involved with clearing that obstacle—a chance that at a higher-up at a big company maybe used to race or likes the sport. Before, finding that guy meant you’d hit a home run. Today, it’s not that simple.

“Back in the days when we did the Chevy trucks deal, it was kind of up to just a few people,” said Evans. “We had a guy there who liked street bikes, so he at least appreciated what the motocross riders do. So then we have an in. Now, with the way the economy is, there’s this fear that when you go to the initial person at the company—let’s say you talk to the VP of Marketing for Company XYZ, that person has to pass it on to three other people, and they evaluate it. After that, they might agree to let you come in and do a pitch—or, if you’re lucky take them to a race. But even then, there’s this CYA deal, where everyone has to make absolutely sure they dot every I and cross every T. They have to make sure that if this gets called into the big boss, and they say, “Why are you spending seven figures on this sport?” These people better have some ammo to prove it was a good decision. As always, if it goes right, everybody wins, but if it goes wrong, you have to be able to convince these people it was a smart decision, and maybe it just didn’t work out, but you had done your homework and there was a real reason to have made this decision. In the past, it seemed like someone made a decision and that was it. Now, all of those people are looking over their shoulder.

“When we did the Chevy Trucks deal with Kawasaki, GM’s ad budget was in the billions,” says Evans. “Billions. GM had a guy named Phil, and he was really flashy, smoked cigars, wore $3000 suits, $500 ties. That’s how it was back then. I was dealing with people four rungs below him. For what we were asking for, a guy like him probably wouldn’t even know. If he turned on the TV and saw James Stewart on a Chevy Trucks Kawasaki, he’d probably say, “Cool. I didn’t even know we were doing that.” Now, I guarantee you the guy at the top knows every single thing that is going on.” 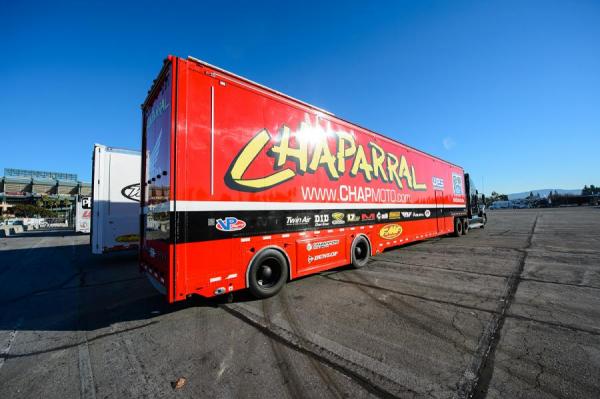 L&Mc Racing had Chaparral as the title sponsor, but really needed an additional outside sponsor to keep the doors open.
Simon Cudby photo

The Gibbs team has a built-in advantage if a sponsor is interested, because they have a large conference room designed to pitch even bigger sponsors on the NASCAR side. It helps compared to other motocross teams, but it’s not a magic bullet. And hey, why not just sign up their big Sprint Cup sponsors like Home Depot, Fed Ex and M&M Mars to the motocross effort, anyway?

“Well we thought that, too,” says Evans with a laugh. “I’m not going to lie, it [the NASCAR connection] helps. But with what’s going on with these companies nowadays, before they could say, “Yeah I grew up riding a dirt bike as a kid, that’s cool.” So they come to the race, they feel like a VIP and they think it’s fun. But that’s not enough anymore—just having a guy in the company thinking it’s cool isn’t going to get it done. They have to see it as a strategic partnership, they have to see numbers. Yes, we did approach the obvious players. But it can also be a drawback. Several times we’ve looked at scenario that could have been very lucrative, but we had to turn it down due to partnerships we already had in place. Also, we can’t do any casino or alcohol sponsorships because of the principles of Joe Gibbs Racing. But it’s key to get creative, it’s not just logos on the shroud and logos on the trucks anymore—although that’s certainly something we point out.”

What teams face today is a much more fractured market, but the good news is that there are holes to be filled. The Business to Business term gets thrown around a lot, as sometimes sponsors go into a venture not just to get more eyeballs on their logo, but to find a link to another company that can help them. Often times, those deals are as much behind the scenes as the traditional sponsorship package, which is designed to be as public as possible.

Last year, the Gibbs team realized the old adage of win on Sunday and sell on Monday doesn’t quite add up, mathematically. The team put up a huge sum of money to sign James Stewart, with the expectation that his star power would attract an outside sponsor to defray the costs of his salary. It didn’t happen. The independent teams need to weigh the cost-to-benefit ratio more than most. A factory team is designed to sell bikes, so winning is the only way to really succeed in doing that. But if you’re not the bike seller—or in the case of a Pro Circuit team, a company that builds their rep on the performance of the race machines—it can be very hard to justify the higher costs of living and dying on race victories. 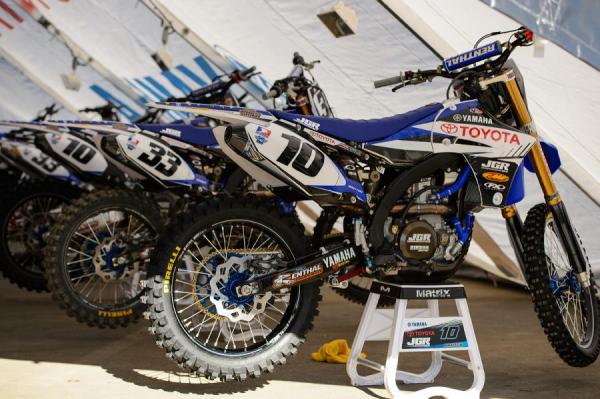 JGR has Toyota as their title sponsor.
Simon Cudby photo

Gibbs has Yamahas help when it comes to paying their riders. But there are only so many of those gigs available—Honda, certainly, was all filled up when L&Mc launched, leaving the team to lease a works Honda at a very steep price. That’s the cost of trying to win races—but winning isn’t always the only goal anymore.

So armed with all of this knowledge, I asked Evans and Gibbs if this is a winning proposition at all. Is the sport big enough to attract enough money to keep teams afloat? While the evidence seemed to build a grim tale, both sounded optimistic.

“Yes, it absolutely is possible, and we’re actually doing it right now,” says Evans. “But, it does get to the lucky part. Timing and luck has a big thing to do with all of it. We were certainly lucky to have a relationship with Toyota, for example. We’ve seen Witt Racing fold, JWR, Chaparral, JDR, and that’s not good for any of us, we want all of these teams to be able to stick around. The good thing is, the money is out there and it can be done, but timing and luck play a huge role. Unfortunately, it’s all much harder than it used to be.”