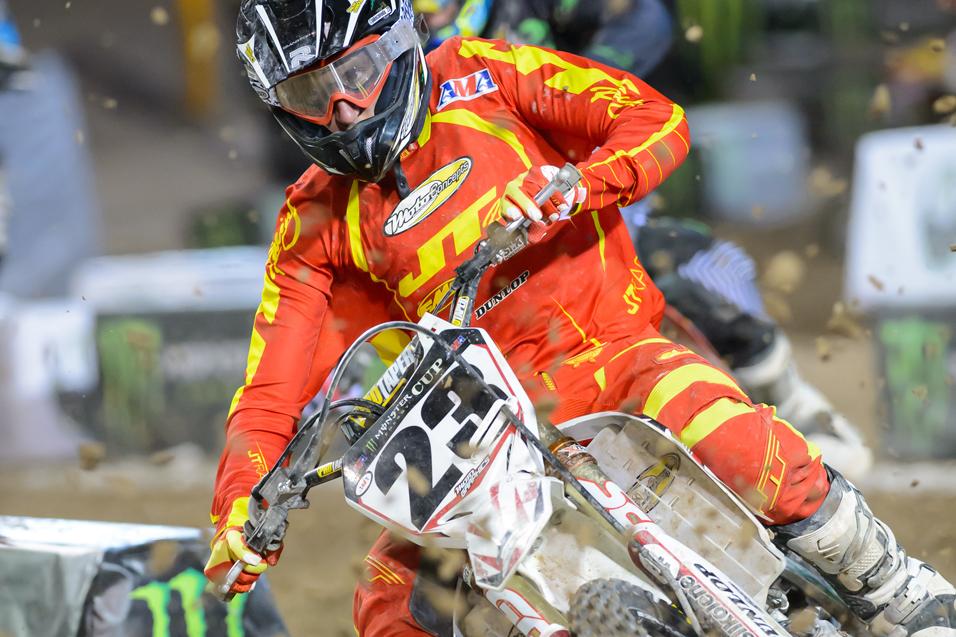 Looking down the results from the Monster Energy Cup, there are a few names that jump out at you in looking for better than expected performances. One of those was MotoConcepts Racing’s Jake Canada and his seventh place ride. Canada, a regular in the top ten in the 250 Class was riding his first race indoors on a 450 and on a different brand than what he was used to. Jake’s coming on as a rider and we thought that his ride warranted a call and more details.

Racer X: Jake, great ride at the MEC. Can you tell us about it?

Jake Canada: Yeah, it went well. It was cool, I had a good time and my expectations were that I could get a top ten and I had about three weeks on the 450 beforehand. And it was a Suzuki at that so that took some time to get used to. I mean, my goals were top ten and I made it in all three motos. I went 9-10-7 for seventh overall and that was awesome. That’s exactly what I wanted to do and it feels good to accomplish.

Let’s talk about that, you normally ride a Honda for the team but at the MEC you were on that Suzuki. Why was that?
Well, we had more Suzuki’s at the shop because Mike [Alessi] and Vince [Friese] ride them so it just worked out better for me to jump on one. It wasn’t bad, it didn’t take me too long to get used to it and I liked it. It’s a good bike and worked well at the race. I’ll be back on the Honda for the 250 Class next year. 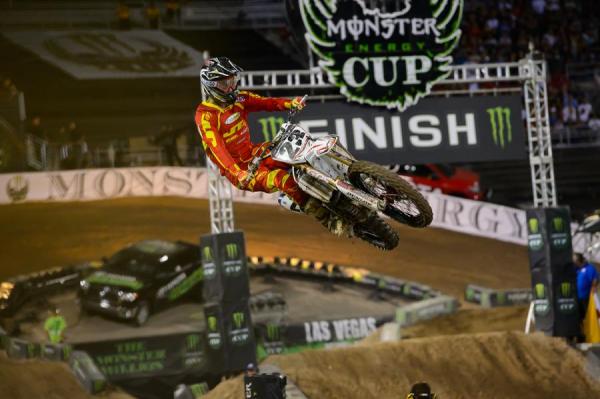 Canada made his 450 debut at the MEC and rode to a seventh overall.
Simon Cudby photo

What did you think of the Joker Lane?
For a one-off race once a year, I thought that it was pretty cool. You had to think about it a bit out there and I used it to my advantage actually. I was behind a bunch of guys and not really making any headway so I pulled into it and then had a clear track to work up to those guys again. Then they had to take it and I made the passes. Dipping into it early helped me out no doubt about it.

That was your 450 debut, what’s the plan for 2013? Can you maybe get on one again?
I haven’t ever ridden a 450 indoors, at all, besides this past weekend but I’d like to maybe do that. It’s been talked about and it depends on how I do on the West Coast. If I’m in the points, maybe we won’t do it. But if I’m back there, maybe that’s something we can do. I ride the 450 good; I think it would be cool to do here and there.

Your team, MotoConcepts, had a good weekend as Mike Alessi ran up front at times and had a good year outdoors, as did you. It’s a different type of team and how has that been for you?
The team is good, Mike [Genova] the owner is awesome and Tony [Alessi] and I work well together. It’s a unique team for sure and we make it work. We’re going to really work on making a good 250f this year, last year was a good start and we had some decent results. Now this year, we’re going to take it to a new level, as Tony gets more involved. I think they’re looking to get another rider for the East Coast 250 side [Editors Note: Rumors have it being Gavin Faith] and we’re going to step it up. 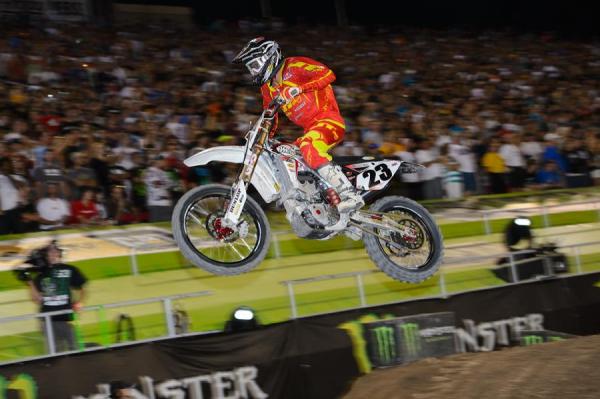 Canada will be back on the Honda 250F for the 2013 Monster Energy Supercross season.
Simon Cudby photo

You’re starting to make your name in the sport, as the 2012 season was a good one for you. You’ve got to be happy about your recent rise.
I do feel like I’m getting better and ever since I got the MotoConcepts ride, I’ve been working hard as I know it was my chance. It was a good fit for me to be on a team because before then I was a privateer and riding an old bike. I got a trainer and I’ve been working hard with him ever since. Last year was a breakthrough for me and I want to keep progressing.

I bet you’re glad that you went to the Lakewood National in 2010 as a privateer, which enabled then MotoConcepts team manager David Vuillemin to see you and get you on the team as a fill in?
Yeah, that’s what did it. I was riding my dad’s stock Kawasaki 450F at that race and it’s a good thing I went there. I was totally a privateer there, paying my way. I’m glad it worked out!