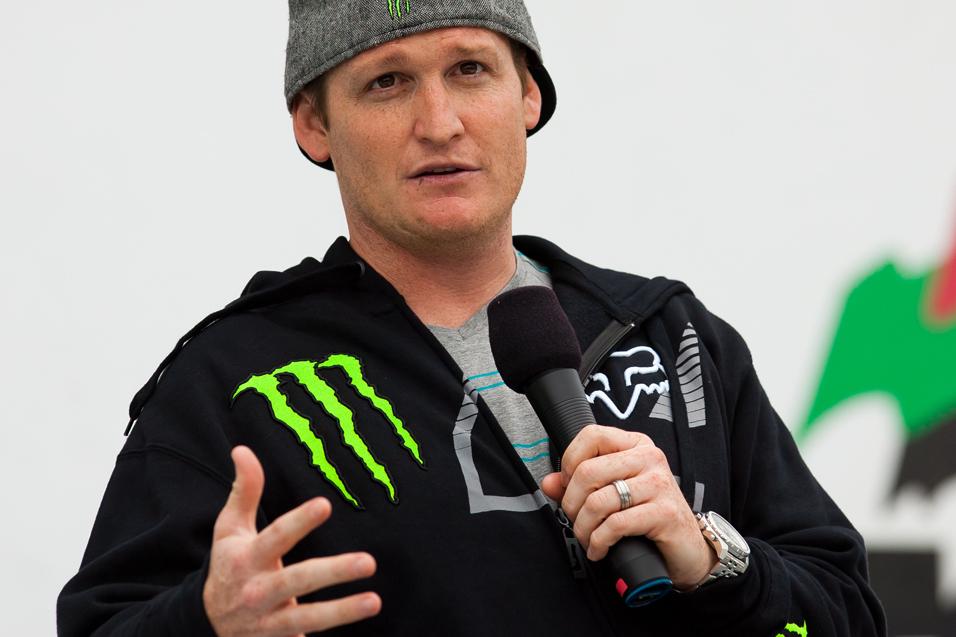 Advertisement | Advertise with Us
Sam Boyd Stadium Las Vegas, NV Monster Energy Cup Monster Energy Cup
The Monster Energy Cup track design has been revealed, and it's pretty darned crazy! Luckily, we had the blueprints in our hands a few weeks ago, and we called up track designer Ricky Carmichael to get an idea of what he was shooting for (you may remember RC from his racing days, like, the days when he won just about everything. He knows a thing or two about tracks). Here's RC on the MEC track.

Racer X: What's up, RC?
Ricky Carmichael: What's up with you, dude? You doin' alright?

All good here. Take us through the track you have designed for the Monster Energy Cup. Lots of unique things here, and it starts with that split start, which races into the stadium.
I'm really pumped about this. We have 11 gates on each side, and you have to change your side for each race. So if you start from one of the gates on the left in the first race, you'll have to switch to the right side for the next race, and then switch again for the third race. I think it adds a cool element, and the best of all if I think you could pull a holeshot from any of the 11 gates on each side. It's easier to maintain--normally you have 20 guys who want 10 good gates. And for the fans, having the bikes funnel into the stadium in one lane will be cool. Normally everyone gets so jammed up going for one line in the first turn, now there are two turns, one on each side. 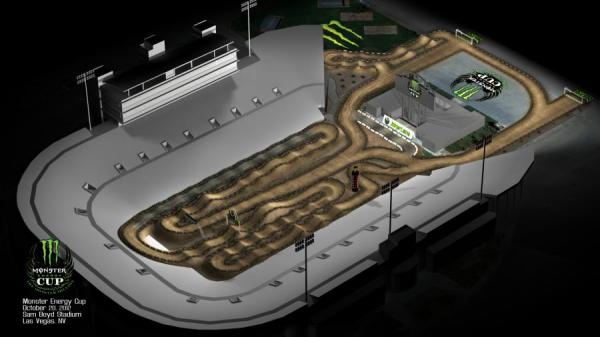 The big story last year was making a track that was combing elements of motocross and supercross as sort of a hybrid. Is that still the case?
The big change this year is we made it a lot shorter. We did that for TV purposes, to keep the lap times down, but I also think it will make for better racing for the riders and fans by doing that, too. It's a little more supercrossy this year. It still doesn't have all the traditional things you'll see in supercross, but it also has some things you definitely wouldn't see in a supercross. As far as being a hybrid, I wouldn't call it motocross, but more of a tamed-down supercross in certain sections, and then mixed in with some fun things.

So what makes it tamed down? Are the rhythm sections not as gnarly? I also see there aren't any whoops.
Yeah. You can't please everybody, but there's one thing I know for sure: great racing is great for the fans, and great for TV. I know there will be some riders that will want it as technical as possible so they are the only guy who can do a certain section and pull away. Well, I think in the end the best guy is going to win anyway. When I have my two cents in the track design, I just want it to be as safe as possible, to let the riders have fun, and to put on the best show. The cool thing about doing this event is that you can add some crazy things to it, and then you don't have to build the traditional gnarly supercross track.

Okay, let's talk about some of those crazy things. The craziest has to be this Joker Lane idea. How does that work, and what will that section have?
Yeah, the section alone won't be that crazy, but the idea is what makes it cool. Basically we will have a little sand section, and after the riders complete one full lap, that lane will open up. And every rider will have to complete that section one time during the 10-lap races. It will slow their lap time down like six to eight seconds. There will be some strategy there, do you do it at the beginning of the race, the end of the race? You have to go through once or you're disqualified.

So if you get a bad start, maybe you get it out of the way early and then use everyone else's slow laps to make passes later. Or if you get the holeshot, you try to build an eight-second lead so you can hold it?
Yeah, exactly. I have my idea on when it would be best to go through there, but we'll have to see. I'm not going to reveal it yet--maybe I'll do it halfway through the TV show or after the event. Then I'll let everyone know what my program would be. From the NASCAR side, I think there's a certain time to pit, and that's kind of what this is. I think this will be fun, and throughout the race, it's going to be interesting. If two guys are battling it out, and one guy goes first and the other guy saves it for later, it will be interesting to see how the times work out. It's another part of this track you would not see on a typical supercross track. We get to do fun things and switch it up here.

You have this Talladega turn. The track went into the stands last year, but this big banked turn looks much more spectacular.
Yeah absolutely. The Talladega turn came with some influence of that first corner at Glen Helen, if you remember that. It had that huge banked first turn, it was really open and allowed for great passing. I hope this works out, I want to make it the best that I can for passing. I want guys to get up there and not have to follow each other through there. We'll see if that works out--I'm not making any guarantees. But it will definitely have the wow factor. That thing is going really high up, something like 140 or 160 feet deep into the stands. I'm pumped for that!

Looks like there's a sand section that goes down a whole lane. Is that part of the hybrid motocross influence?
Yeah, that's definitely an element of motocross. But I think it's just fun to watch! That lane is so close to the fans, it will be kind of in your face, if you will. You don't have to follow there, as well. And from there, you race right up into that Talladega turn. The rest of the track after that is more like your traditional supercross course. We'll have a big finish line where the boys can really air it out. And we've incorporated a lot of 180-degree corners into the layout this year, which is always great for passing. We've shortened the track in the back section, as well. Huge changes this year and I'm excited for it, I'm glad Feld Motorsports let me be a part of all of this. Hopefully the riders will be pumped, the fans will be pumped, and we'll watch someone win a lot of money.

Hey, without a whoop section, could that change bike set up a lot? I know a lot of supercross set up starts with getting through the whoops, first.
I think not having a whoop section takes away that element some of these guys have to worry about. If they're gnarly and cupped out and brutal, you have to worry about that every time. If you don't have a lot of confidence in whoops, well, this is one less thing to worry about, and they end up riding better.

But you don't think guys will change their setup compared to a regular supercross track?
Yeah, the guys won't have to set their bike up for one section, and I think that will be good. 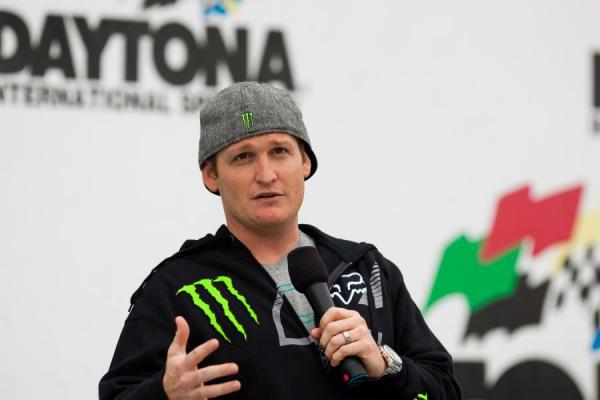 This is the second year RC has designed the Monster Energy Cup track.
Andrew Fredrickson photo

There's a really sharp left/right in the back.
A lot of that is to slow it down a little bit before they get to that back section. We're just switching it up.

This event was totally unique last year, and I'm sure you guys left with some good ideas on what worked and what needed some changes. You have to be pumped to get another shot at this.
Oh yeah, it's always easiest to improve from the first time to the second, and if you're not improving, you're not doing your job. I'm much more involved this year than I was last year, and I'm really excited about it. I'm hearing a lot of buzz. It's going to be good.

Last thing: do you wish you had a chance to race on this thing?
Yeah! It would have been cool. The hybrid track would have catered to me and what I like. And to just have the chance to win a million in one night! I was fortunate enough to win the U.S. Open and the hundred grand three times in my career, and hell, that 100 grand felt like a million way back when. So these guys should be excited to have this opportunity to win a million!