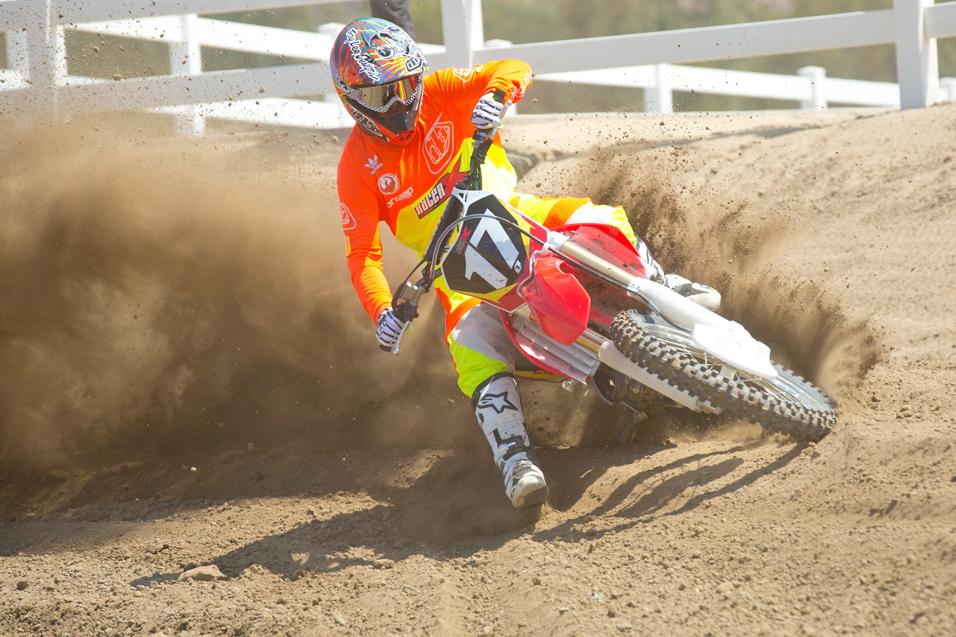 I’m just your average 55+ weekend warrior here who dreams of being as skilled and as fast as you.  I have read a couple of articles over the summer that imply a couple of the riders in the top 10 could perform at a higher level more consistently if they were better in the testing phase of their program.  I have only been riding about 8 years now (yeah, late start, but better late than never) but I just can’t wrap my head around testing being so difficult for the guys of your skill level.  Can you shed some light on the subject for this older wish he was?

Keep up the excellent writing.

Glad to hear you are getting involved in motocross as you ease into your golden years. Most folks would be looking at shuffleboard or bingo as their hair starts to turn blue but you go right after one of the most brutal sports on the planet. Good for you. Kudos.

Testing probably seems simple, and the initial stages of it are. Getting the chassis setup is usually step one. Once you have the bars, triple clamps, sag, footpeg position, etc that makes you comfortable you can move on to the engine or suspension stages. That is where things can get crazy. A good suspension technician can usually get you in the ballpark right from the start. But when you start fine-tuning it’s very easy to go in the wrong direction and get lost in your settings. Engine stuff is similar but the good engine builders have figured out what most guys will like on the dyno. So, by the time they get to the track they can make the rider happy with gearing, exhaust or mapping changes.

Then there are tires. Think you could decipher between identical tires with a slightly different durometer reading? That’s like blindfolding yourself and trying to decide if the pen you are writing with has blue or black ink.

Some riders have a very keen sense of what the bike is doing underneath them. You make one small adjustment or change and they can give you feedback. Other riders would barely be able to tell if you replaced their footpegs with wooden sticks. The benefit to being a good test rider is being able to come in when your setup isn’t working and give good feedback to your crew and maybe even some setup suggestions. The more oblivious you are to the testing process the less likely you are to make good changes when it counts.

I am a huge fan of #5 Ryan Dungey! His gear is awesome! I have looked everywhere for Nike 6.0 riding boots and Red Bull gear but unfortunately I have not been able to find either. Do you know where I could purchase these items for my husband? It would be awesome to see him sporting Dungey's gear not only on the track but in the bedroom as well! Thanks for your help!

Wow. Sadly the only role-play I ever did was when I was a little kid and I used to put on my He-Man pajamas and imagine my bedroom was Castle Greyskull. It was mildly entertaining at best. But this thing you have going on at home is equal parts awesome and disturbing. On the one hand it sounds like you and your husband have, at the very least, an active relationship in the bedroom. Good for you guys. On the downside, you are pretending that your husband is another man. Hey, I’m not a marriage counselor but that could end up being weird down the road. But who knows… maybe he has you put on a blonde wig, a red one-piece bathing suit and a fake barbed wire tattoo around your bicep and then come flying out of the shower Baywatch style. You guys are a regular couple of thespians over there. Good luck with that. Here’s what I can tell you about Ryan’s gear: You can’t get the boots because Nike doesn’t sell them. Nike pays James and Ryan a bunch of money to run them but then they don’t sell them to the public. Makes perfect sense, right? Unfortunately, Fox does not sell any gear with the Red Bull logo on it either. In fact, Red Bull is very restrictive about where their logo can be placed so you will have a tough time finding it anywhere to buy. Sorry to crush your dreams you little freak.

I was watching Reno 911! the other day and Mike Alessi is a spittin' image of Lt. Garcia. I just wish Mike would sport that sweet caterpillar above his lip like Garcia does! On a similar but separate note, I am not a huge fan of Mike but have a ton of respect for him as a rider. Why is it that Mike seems to be disliked by a majority of the fans? Besides from his numb nut decisions when he was younger I feel he has grown up and is a top rider in our sport. Is he liked by fellow riders or the industry?

I never picked up on that resemblance but now that you’ve mentioned it that’s all I can see. Mike is a thick mustache and a pair of aviators away from actually being Lt. Garcia. It would be a cheap Halloween costume if nothing else. I wouldn’t say that Mike is disliked by a majority of fans but he has definitely alienated some over the years. His problem started at his first national in Millville. Remember the ‘Believe the Hype’ shirts they wore around? There were a few random incidents and then the one that really left a dent in his credibility, his actions at the season finale at Glen Helen with Ivan Tedesco. That behavior just couldn’t be explained away. And that reputation has followed him around a little bit. Add in the odd-at-times actions of his family at the races and you have the juicy, thick Alessi gumbo that we see today. Still, Mike has proven that he is one of the best riders in the sport and he is having arguably his best season ever. I think Mike is a nice guy and probably a little misunderstood by his critics. I can’t speak on behalf of the industry but one thing is for sure… you have to respect a guy who won a moto this summer and finished a strong second in the series.