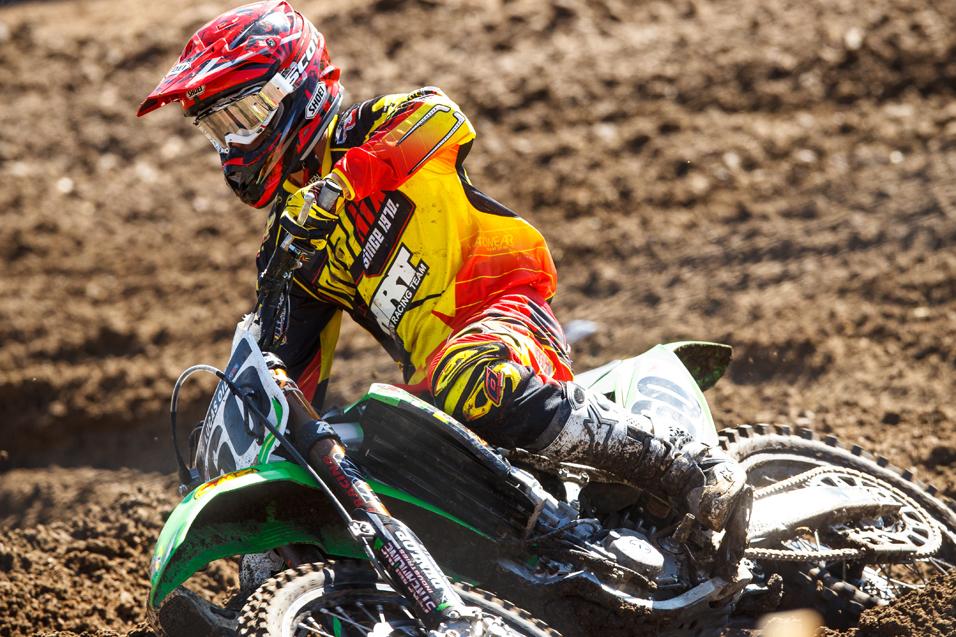 After a stint with Star Racing to begin his professional career, it’s been a privateer journey for Matt Lemoine. The Texas native, by way of Louisiana, has spent the past few seasons crisscrossing the country in a van, sleeping little, and practicing less. Lemoine resurrected his career in 2011 with eight top tens in nine rounds competing in the East Region Lites class. Signing with HRT Racing during the off-season meant Lemoine, for the first time since his Star Racing days, would be ditching the van for the friendly airways. Although he was unable to match his 2011 season, Lemoine was still able to finish ninth overall in a very, very deep East Region Lites class. Now, for the first time since 2009, Lemoine is aboard a 450. With little preparation Lemoine has been able to quickly adjust to the bigger, more powerful bike. We caught up with Lemoine earlier this week to talk about his transition to the 450 class and his expectations going forward.

Racer X: You began the year in the Lites class for Supercross but have transitioned to the 450 for the Nationals. How has the adjustment been?
Matt Lemoine: Everything is going good. I’ve been building every weekend; getting stronger, getting used to the bike. I think a big step is getting stronger for the 450. Everything up to this point has been great, and I hope these next couple of weeks before the break I can a couple of top ten finishes. 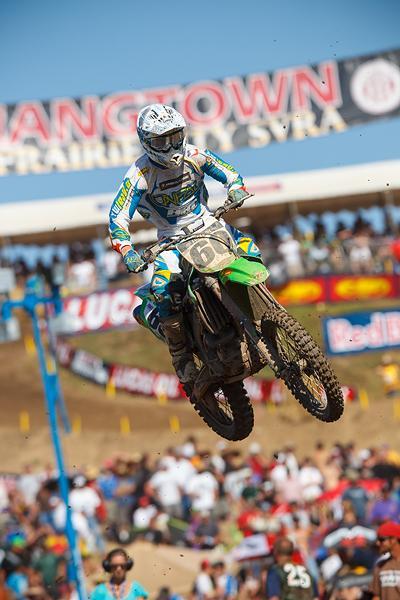 Lemoine made his 450 debut at the season opener at Hangtown.
Simon Cudby photo

Riding the East Region Lites class usually allows little prep time for the outdoors. How much time did you actually have to prepare on the 450?
I only had a couple of weeks before Hangtown to prepare. I rode [the 450] during the two-week break we had when the West Region came back and then the week before outdoors. So I was really only on the bike for about three weeks before we raced Hangtown. I have been riding the Lites bike for the past five years in supercross. I haven’t touched a 450 since ’09 at Loretta Lynn’s when I won the four-stroke class. It’s been a big transition but I think the bike is fun to ride and I’m getting more and more comfortable as the weeks go by.

Except for a bike problem in the second moto at Freestone, you have been knocking on the door of the top ten all season. Are you surprised to be running up near the top ten this early in the season, considering you have had to make a quick adjustment to the 450?
Not surprised, but I’m definitely stoked to be doing so well, so early. I think I was more surprised I was able to do two 35-plus minute motos since I didn’t have that much time on the bike. I wasn’t sure how my fitness would be riding that bike on a rough track for that long. But I think as the weekends go on I’ll be able to improve on my fitness, and being able to ride the bike more will help.

You mentioned trying to get stronger for the 450. Have you made any adjustments to you training regiment?
Actually my buddy, Cole [Martinez], who’s also on the team, and I, have been during a lot of cross-fit training. Obviously I’m still doing a lot of cardio as far as running and road biking a lot, but we have been doing this for the past few weeks and I feel like it will help me get stronger. Also, riding the bike helps a lot. Every day I ride it I feel like I’m getting stronger.

After a few years as a full-on privateer, you now have some good backing from HRT Racing. How big of a difference has that made in not only your riding, but your training during the week?
It makes it so much easier for a rider. To be able to ride that extra day and be able to fly to the races is a big help. When you’re driving to the races and are in the van all week it takes a toll on you throughout the year. But I feel the biggest thing is being able to have that extra day of riding and training. 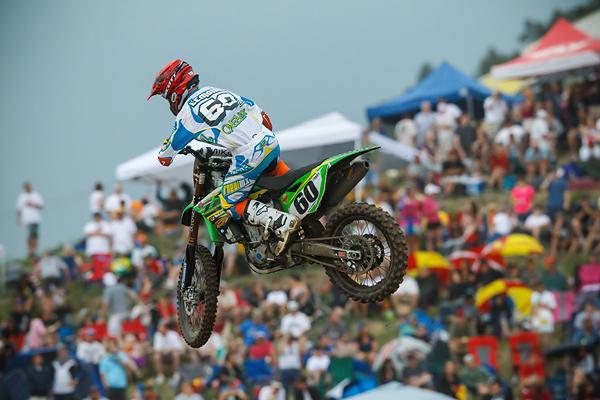 On the cusp of a top ten overall all season, Lemoine is hoping to break through at High Point this weekend.
Simon Cudby photo

What adjustments do you think you are going to have to make in order to make the leap into the top ten?
I really need to get better starts and break away with that top ten group. I think that’s the biggest difference between me and the guys that are even running top five. The whole first moto in Texas, Andrew Short and I battled the entire race, and I finished right behind him, and he got a podium in Colorado. So it just goes to show how big the start is. I think if I can ride a good, smart race and not make any big mistakes I can get inside the top ten. In Denver this past weekend I feel I would have been able to get a top ten had I not gone down. I need to stay off the ground and have a solid race and I think I can get inside the top ten.

You’ve had a strong start to the season, what are your expectations going forward?
I think making progress every weekend is the biggest thing. So far we have been doing that and hopefully every weekend we can continue to take steps forward. I just want to be able to ride and do the best I can do.

You also have some skills off the bike. Word on the street is you’re quite the Mad Skills Motocross player?
[Laughs] Yeah, I’m pretty good. I think I’m around the top ten right now, but I’d like to get inside the top three.

[As of press time Lemoine is currently second out of 17,178 people in round one of the Mad Skills Motocross Tournament “T2”]

Who would you like to thank for helping you this season?
I would like to thank HRT Racing, Rekluse, JM Racing, O’Neal, Shoei, Alpinestars, Dunlop, Tamer, FMF, Mika Medals, Boysen, Spread Line Brakes, SDG, Dubya, CP Pistons, Ride Engineering, DVS and Young and Reckless.