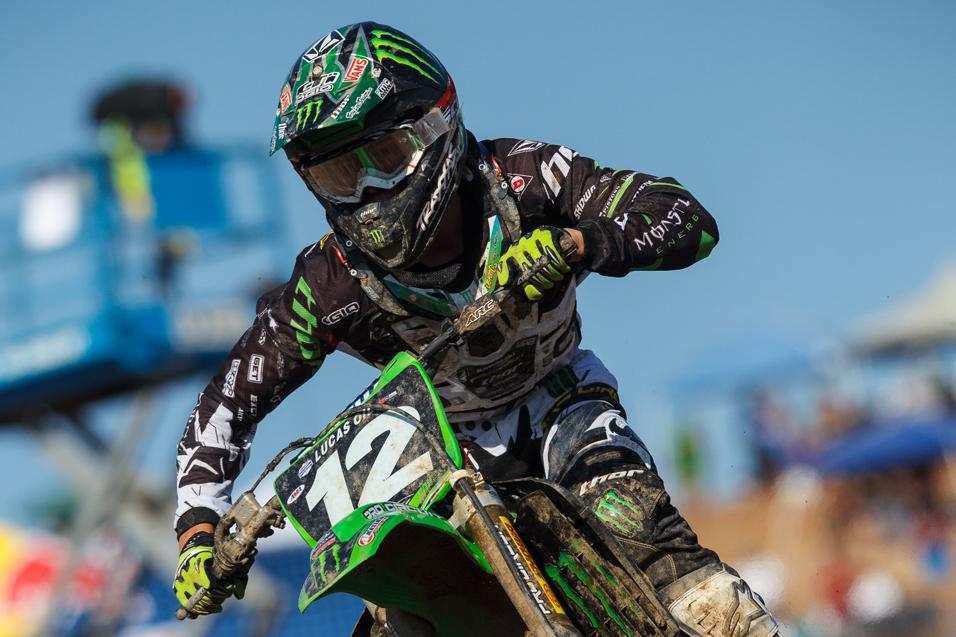 Advertisement | Advertise with Us
Hangtown Motocross Classic Rancho Cordova, CA Hangtown Motocross Classic Lucas Oil AMA Pro Motocross Championship
Monster Energy Pro Circuit Kawasaki’s Blake Baggett didn’t have the supercross season he had hoped for—failing to take a win after getting several in 2011—but he found last season’s form in time for the Lucas Oil Pro Motocross Championship with a 1-1 performance at Hangtown. Here are Baggett’s thoughts from the post-race press conference.

Racer X: How did it go?
Blake Baggett: I don’t know, definitely couldn’t expect anything better. A 1-1 was way better than what I expected, I would have been happy with a 3-3 and just getting on the box every weekend. I don’t want to go out there and ask for too much and ask to win every race. I want to be in the championship points every weekend, and be in the hunt with one or two rounds to go. Last year I had some weekends that were good, or actually beyond good, I would win motos, and the next weekend just throw it away. I just want to level things out. The first moto today, I got a little gift, we missed the 30-minute mark by like eight seconds so we got another lap. That last lap was chaos. I can’t even tell you what went on, I was bouncing from one side of the track to another, Roczen and Barcia, we were are all battling. We didn’t take the same lines, it was definitely gnarly!

The second moto I got a little bit better start, I was top five. I got two gifts right away, someone who was right there went down, then Roczen tipped over right away, so I was into second. I knew if I just hung with Barcia’s rear wheel, maybe I could find a line and make a pass. For a long time, I couldn’t do anything, but I was able to find a line and make a pass. He stuck right there, I tried to get a gap but he was still right there. I was finally able to get a gap. 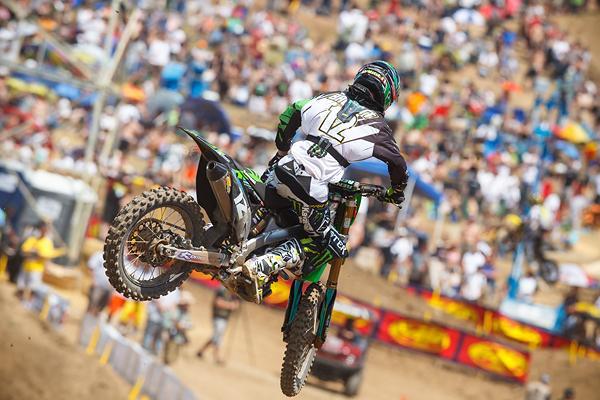 Baggett's late charge in moto 1 propelled him to the win and the overall.
Simon Cudby photo

It has to feel good to come out on top of a battle with that, and you guys all kept it clean.
That’s never been me, I’ve never been a dirty rider. I try to keep it clean, but yeah, it was gnarly, and I’m sure the as the year goes on, it’s just going to get gnarlier. Roczen is a world champion and Barcia is a two-time supercross champion, so it’s going to be tough.

Last year, speed wasn’t a problem, but you said consistency is something you want to work on for this season. What are you doing to be more consistent?
I don’t know! Maybe I have to think more. We’ll see next weekend if I have it figured out. It’s just being patient. Last year I think when I got into some situations I would rush it and land on my head, and this year I’m going to try not to do that.

We saw you at the Asterisk rig between motos. What was going on over there?
I was trying to get them to glue my hand back together! I guess I didn’t ride hard enough in supercross, because I got a gnarly blister. I had them try to glue it back together, but it didn’t work, it opened back up. I just had to cut it off.

How rough was the track?
It’s definitely one of my favorites. It’s like a mix of Comp Edge and Glen Helen, and those are two tracks I ride all the time. It’s good, I definitely think this year they put a lot less water down before the race, because the first practice wasn’t really muddy, nor was it rutted out. I knew right there it would be kind of single file in the corners, but it would get choppy and rough, too. I felt like last year the track had maybe five or six ruts per turn, and I would say the bumps were bigger. So I would say the track was slower. This year we were going so fast across the bumps, it felt like your wheels were barely on the ground, we were just bouncing everywhere. 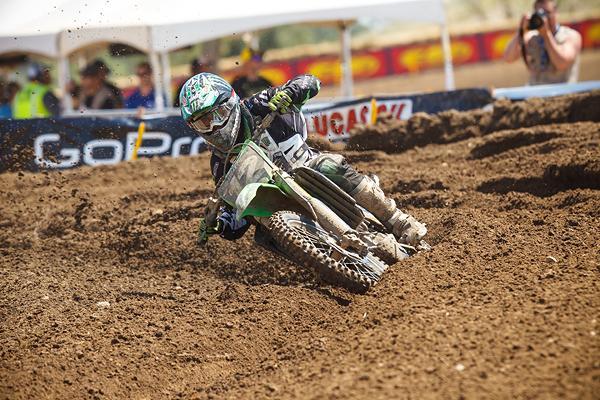 The first moto, did that set you up and help you learn some lines?
I think I started in sixth and went backwards right away. I got passed right away by Tomac and Musquin, and they pretty much got away really quickly. I didn’t have it dialed in the first few laps, which caused me to lose a lot of ground, and led to all that chaos at the end. So definitely that probably helped me, but I think more than it helped me learn where I could pass them, it helped me find the lines not to take—whether the line I took was better or not, I tried to take a line that was the same. On the last lap, Roczen jumped that jump on the right, and I was on the left, and he looked over at me, and instantly I knew he was going to the inside, and that was good because I had been going around the outside the whole time and I knew it was faster. Right there I knew it was going to be gnarly going into the back section, and there was a chance neither of us was going to come out of there! We both ran it in really deep. I ran it in there beyond deep, I was thinking, 'Man maybe I should shut it off!' but he was still right there next to me! Yeah, it was definitely a weird track today, I would say last year’s Hangtown track was better for passing, it had like eight ruts in each corner, and four of them seemed about the same speed. This year it was more like one big almost quad rut on the inside, and outside of that was just muck.

Thoughts on Freestone?
[Unlike last year] Make it past the second lap!