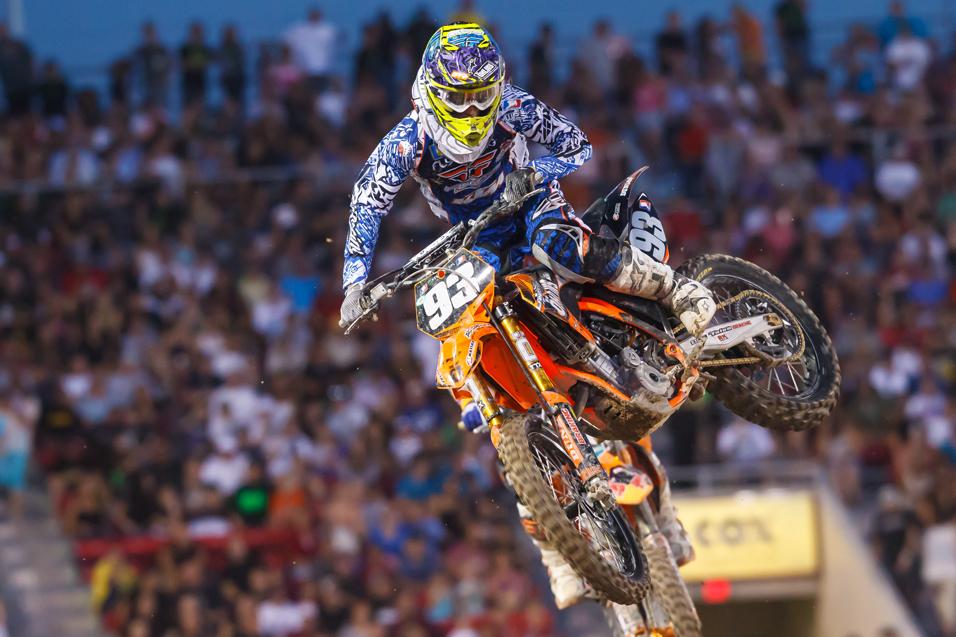 Advertisement | Advertise with Us
Hangtown Motocross Classic Rancho Cordova, CA Hangtown Motocross Classic Lucas Oil AMA Pro Motocross Championship
We all know that Supercross and Motocross can be physically demanding, but what about the mental side of it? This was set to be a breakout year for soon to be 19-year-old AJ Catanzaro on the newly formed Ohlins USA Langston Racing KTM Team, but Supercross has been somewhat of a struggle. It’s certainly not for lack of talent or desire. Catanzaro just needs to turn the pressure valve off, and believe he belongs. After all, turning pro in 2010 AJ joined the AMA Arenacross Lites West series, and immediately started winning. In fact, he won the championship! The following year as a Supercross Lites privateer he made all the mains. But this year the kid from Connecticut has struggled with the pressure that he put upon himself riding out of a semi.

Racer X: AJ, let’s hear about your East Region Lites Supercross series.
AJ Catanzaro:
It’s really been a rough year for me so far, but I’m trying to stay as positive as possible. At the beginning of the year I was just too worried about everything, the team, the sponsors, and just trying to make everyone happy. I was too stressed about doing well for everyone and I did worse. It was the first time that I had ever ridden out of a team with a semi. It was a lot different vibe than what I had experienced before and I just put way too much pressure on myself, and it really hurt me.

What do you think has caused this pressure, and what have you been doing about it?
Last year when I tried some supercross events I just loaded up the back of my van, so there was no pressure. My mindset was 'What I do, I do.' There was no pressure, and I didn’t have to live up to anyone else’s expectations other than my own. This year with Langston joining in with the Ohlins USA Team we really jumped up as far as getting increased attention, and I was not expecting that, so that added to the nerves. But I’ve been really trying to now tell myself that, 'You earned this, and deserved it.' Now I’m trying to not worry about anything other than just racing my motorcycle. 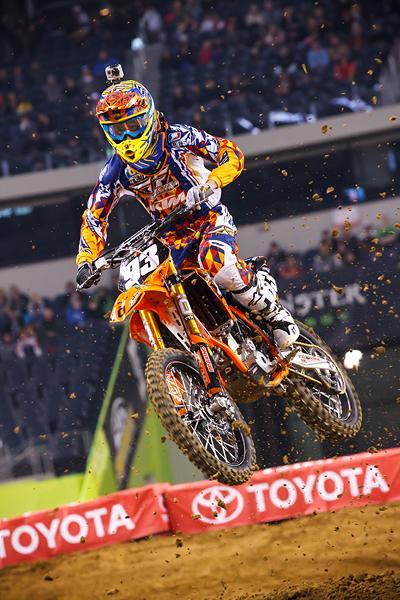 This was the first time in his career that Catanzaro has raced out of a rig.
Simon Cudby photo

How is it working with Grant Langston? Has he been able to help you?
Yeah, especially when I am out in California and around him more. It’s been very beneficial talking with him. He is always there, around and doing anything that he can to help me, and the rest of the guys. He likes to hang out and ride with us when he can. Sometimes you may have a team manager that will say, “Hey do this, do that” but they do not ride. If that happens with Grant, he’ll say, “Okay, I’ll go out and show you how it’s done.”  He’s been around the sport for a long time, and honestly, he about knows it all!

Talk about your KTM. Often you’ll hear others say that KTM’s handle differently than the Japanese bikes. In your case was there any significant adjustment?
No, not really, there was not much adjustment to it. KTM has really worked hard the past few years, and their new bikes are awesome. I rode a Honda 250 last year, and when I jumped on the KTM this year the chassis felt very similar. KTM’s are super-fast. Actually they have always been fast. It took a little getting used to the electric start at first, and everytime that I went to start it I reached for the kick start. Honestly, electric start was probably the biggest thing that I had to get used too, but overall the KTM has been great!

Let’s go back two years when you raced Arenacross. You won the Arenacross West Lites Region in your very first year!
Well at first, Arenacross was not something that I was going to do, but I am glad that I did! Josh Woods at GPF (Georgia Practice Facility) gave me a great opportunity back in 2010 to race West Coast Arenacross Lites. I actually won most of the races, and then took the Championship. That gave me so much confidence coming into supercross. It especially helped with the rhythm sections, the whoops, and tight turns. Arenacross was also very aggressive which would then help me in supercross. Arenacross was great, and really kick-started my racing career.

Then what happened last year?
Well I was just down at GPF riding supercross on a Kawasaki 450. I didn’t really have anything going on–-no ride, or money to do anything. Then I put a post on Facebook saying that if anyone wanted to get me a bike for supercross that I would like to race. I actually got a call from a guy named Rudy Schellenberger who is now a good friend. He asked me to send him my resume which I did, and the next thing I knew was that he told me, “I’m on my way to get you a bike.”  So, we went racing! I made all the mains, and actually did pretty good on a bone stock bike. It was a great experience, and really helped me a lot with gaining more experience. 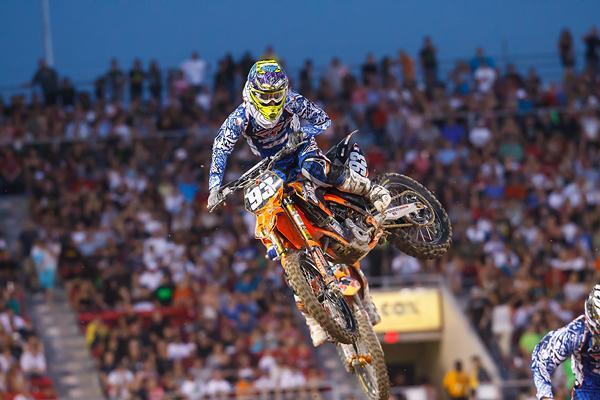 Switching to the upcoming motocross series, I know that your teammate Les Smith is racing a 450. What about you?
I’m racing the 250, but have been doing some practicing on the 350-–which I just love. It’s not that different than the 250, it has the same chassis as the 250 rather than the new 450 chassis. You can leave the 350 stock, and it is just a little faster than a 250 race bike. So I’ve been riding outdoors and just getting ready for the motocross series. My focus recently has been all about outdoors!

Do you have any thoughts about where you want to be finishing in motocross?
In the past I have always set a goal coming into a series, and had a number in my mind, but this year I am avoiding that. I have just been focused on working with the right trainers, and the right riders. Davi Millsaps has taken me under his wing and really been helping me with my riding. I’m going to be in shape, and I’m going to be riding well. Wherever I end up I am not going to put any pressure on myself.

Is there anything that you want to add?
I really want to say thank you to the whole Ohlins USA Langston Racing Team. These guys have helped me out so much, without them I would probably be sitting at home on my couch.