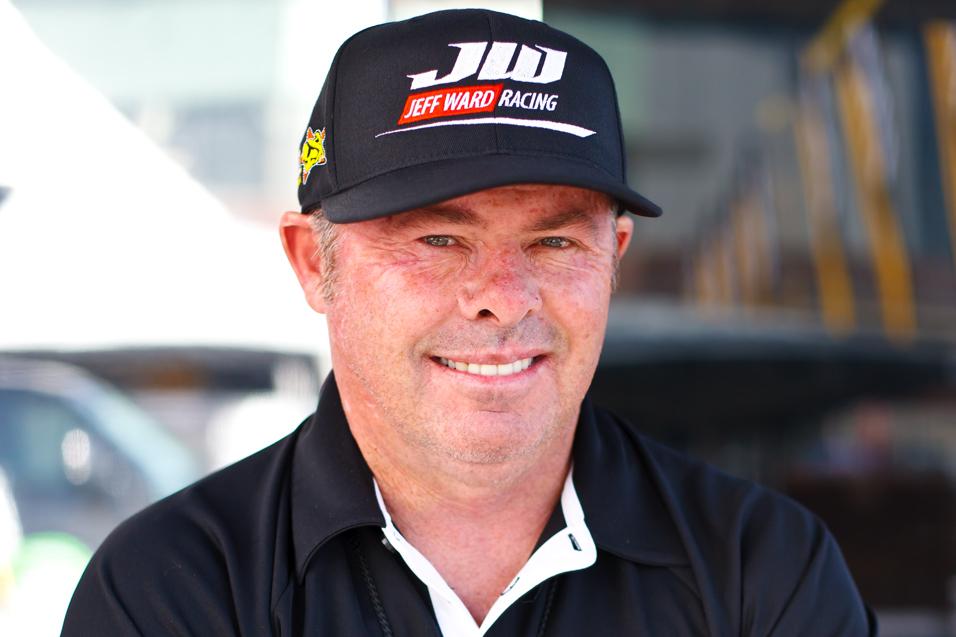 Advertisement | Advertise with Us
Hangtown Motocross Classic Rancho Cordova, CA Hangtown Motocross Classic Lucas Oil AMA Pro Motocross Championship
Seven-time AMA National MX and SX Champion Jeff Ward is one of the all-time greats, and he made his return to the sport this year as part owner of the DNA/Jeff Ward Racing Kawasaki team. In a rebuilding year with Josh Grant and Kyle Chisholm, the team didn’t light the world on fire, but Ward is taking a patient approach, and hopes for a little more outdoors. We talked to Ward about the season, and then, of course, transitioned into some bench racing about the old days. Hey, it’s Wardy!

Racer X: You got through the full supercross season. When was the last time you were doing this much traveling and going to this many races? IndyCar and Supermoto days, or back in the moto days?
This is kind of typical for me, I had off-road truck stuff, too, so this is really the first year I wasn’t doing a lot of racing myself. Even the IndyCar days, that would be 16 or 17 races. But no, I haven’t gone to this many supercross and motocross races since I was racing. I’d usually hit the California ones, but it’s been awhile since I’ve done the grind. 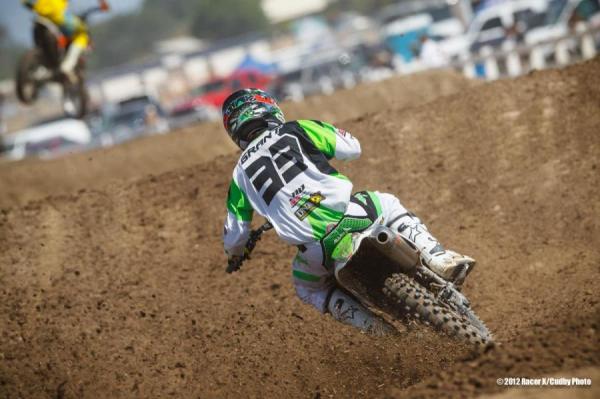 "I don’t expect him to be winning races right off the bat, although that’s what he’s capable of.." - Jeff Ward on Josh Grant.
Simon Cudby photo

So how would you rate the first year? Your team seemed to have a long-term approach.
Yeah, we were late getting started, just with bikes and stuff like that. And Josh [Grant] came in hurt, so we didn’t really have any expectations for him besides knowing he could go fast on a motorcycle. And Kyle [Chisholm] was a solid rider who we knew would get better as we went. It was pretty much as expected for us, but Josh got hurt at Dodger Stadium, and that kind of hurt us and helped us. It helped Josh get his knee healed up, and when he came back, we started focusing on outdoors. He wasn’t really trying to do well at supercross, so to get that second at New Orleans, I don’t want to say he shocked us with that, but it definitely showed where he could be.

Right, so you weren’t expecting the world in supercross. What about motocross? Are your expectations higher?
Well, both series, Josh hasn’t ridden in the last couple of years due to injuries. Looking at him riding with all the guys outdoors the last few weeks, he has the speed to be on the podium in every moto. The expectation is to get through the first few rounds. You can come out to the first round, thinking you need to be a podium guy, and you can start pushing too hard and get hurt. Then your whole season is done. So he just has to feel it out, ride like he’s capable of doing, and just finish wherever that is. I don’t expect him to be winning races right off the bat, although that’s what he’s capable of, because he has the speed to do that eventually. The mentality is, we have 12 races.

From talking to you and talking to [Team Manager] Paul [Delaurier], your team really seems to have a long-term approach, without putting pressure on anyone for instant results. Most teams can’t stop themselves from wanting to go for the glory.
Well, you just have to look at the situation and see where you’re at. You can’t just push someone to get something that is not there. I won championships not because I felt like I needed to win every race, because some days you’re just not feeling it. You take what you can get out of those and come back to fight another day. I’ve been there and done that, and everything is clicking well. I think we’ll surprise a lot of people outdoors, but, really it’s a rebuilding year for the team, from back when it was called L&M. Those guys have been there with different bikes and different riders, but back then, they had riders who were expected to win immediately, not just build into it.

Have you enjoyed it?
Yeah, I have enjoyed it. The most stressful part was the beginning of the year, trying to get bikes and parts and sponsors. We had to do everything within six weeks or so. And we didn’t have a track, but luckily Kawasaki let us use their track at times. Once we went racing, these guys know racing so that was easier. The good thing is, next year we won’t have those hurdles, in October we’ll be ready to go and start focusing on supercross. 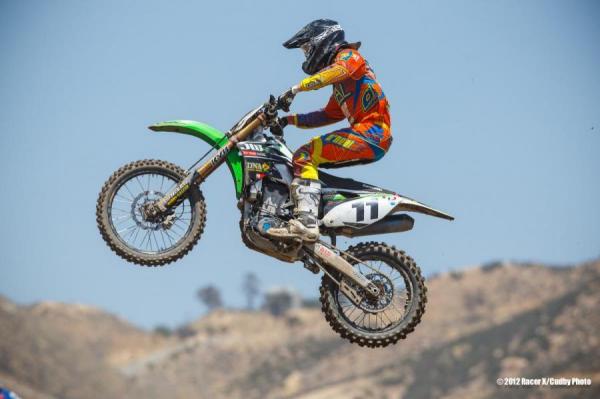 This has been a bad year for injuries. Do you have any idea why?
I just think it’s a bad year. I don’t think the tracks are more dangerous. Look at Chad Reed, he was riding the best I’ve ever seen him ride, and he didn’t crash trying something crazy on the last lap to get the lead. Everything was like that all year. Last year, no one got hurt, so the odds caught up to us. These guys want to win, and they’re pushing, I wouldn’t say to the limits, but they’re pushing hard, and everything in supercross is big.

You’ve told me before about racing on broken ankles, so this isn’t new.
It’s not a shocker to find out motocross is a dangerous sport! The light didn’t just come on there. There isn’t a guy out there that’s not hurt. You can’t ride and train so hard and not have something bothering you, but these guys are tough and put it out of their minds.

We know how hard you guys worked in your day, and sometimes that makes it hard for riders from your era to relate to today’s racers. Has that been a problem for you, or do you feel like everything is the same?
No it seems like the same world. The guys that win races put their time in. Plain and simple, Villopoto, Dungey, Stewart, those guys aren’t taking days off. Those guys are doing it everyday, whether they’re feeling it or not. And that’s the way it has always been, and that’s the way it is in any sport. The guy that’s at the top is doing the most, and that’s all there is to it. You’re not winning because of luck. I think the guys in the top 10 all have the ability to ride a motorcycle the same speed, but doing it for 20 laps, that’s the hardest. You have to keep those lap times down, and the guys who train the most do a better job than the guy that doesn’t. 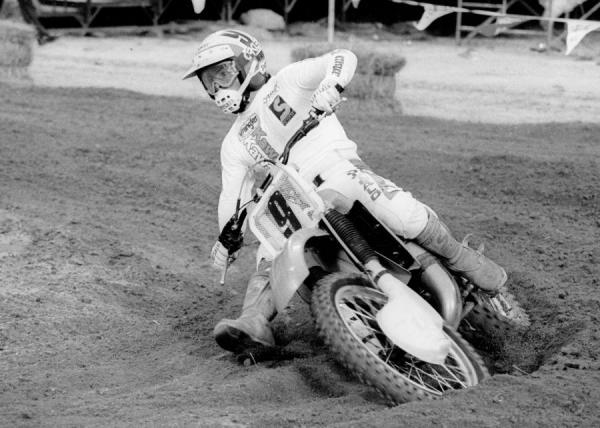 Right now people are thinking Dungey and Stewart are the favorites outdoors, and you’ve been in that same situation before when you and Rick Johnson were the two main guys. Did you see it that way and focus on him, or did you just do your own thing?
No, I just prepared myself to do whatever it took to win races. You knew that whoever was there to challenge you, you had to be in better shape than him. You just prepare yourself to do battle that day and never lose time because you got tired or overheated. If it was Ricky [Johnson] I just knew I had to do more than him, and he would say the same thing about me. Guys like him, Johnny O’Mara, those guys put in the work, and that’s what got you out of bed in the morning. Wins didn’t come easy for me.

Yeah, what was your record for consecutive days of riding? 90 days or something?
[Laughs] Yeah, I rode for 90 days straight at one point. It started in October and went all the way into the supercross season, until the travel finally wouldn’t let me arrange my schedule. I was riding just for 20 minutes on a travel day just to squeeze it in. I’d ride Friday before the race and Sunday after the race. It was weird, I’ll admit it.

You never got sick of it?
No. I had to drive an hour just to ride, and that was the biggest part. But I loved training and I loved riding—I was into triathlons and stuff, and I’d do weights with Jeff Spencer. I loved it, so it wasn’t a chore to me. I had a log book and my goal was to beat those numbers everyday.