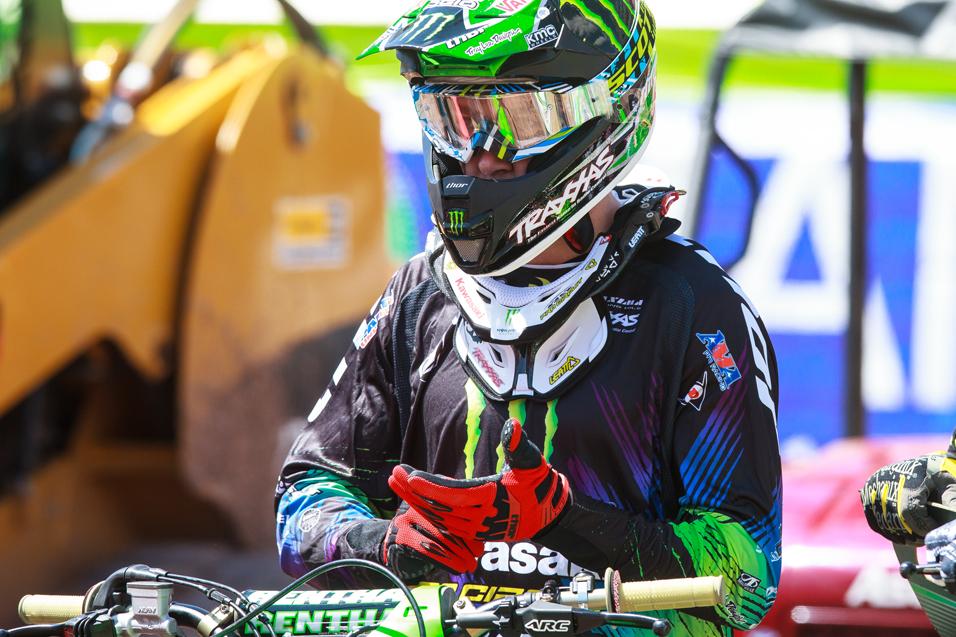 Advertisement | Advertise with Us
Sam Boyd Stadium Las Vegas, NV Las Vegas Monster Energy AMA Supercross Championship
Darryn Durham - Dislocated Shoulder and Torn Labrum
Comment: Durham injured his shoulder this week in practice and will not be racing in Las Vegas. We are still awaiting word on when he’ll be able to return to racing.

Nico Izzi - Broken Nose
Comment: Izzi crashed hard in qualifying in Salt Lake City, breaking his nose in the process. Despite the injury, Izzi will be racing in Las Vegas.

Ryan Sipes - Soreness and Bruising
Comment: Sipes was left feeling banged up after Jason Anderson ran into him during the parade lap in SLC, but is still planning on racing in Las Vegas.

Cole Seely - Ruptured Kidney, Lacerated Liver and Whiplash.
Comment: Seely crashed hard in SLC and will not be at racing in Las Vegas. He’s also expected to sit out the first part of the Nationals, and there is currently no timetable on his return.

Travis Baker - Concussion
Comment: Baker suffered a concussion in SLC and will sit Las Vegas out. Baker will be ready to race for the start of the Nationals. 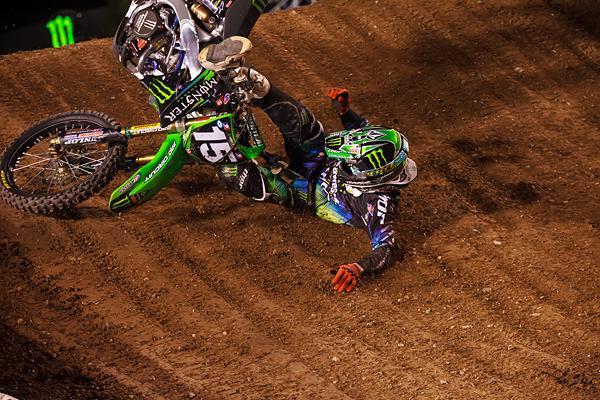 Despite a shoulder injury Wilson will be racing in Las Vegas on Saturday night.
Simon Cudby photo
Nick Paluzzi - Fractured Scapula
Comment: Paluzzi is hoping his injury will only keep him off the bike for two weeks.

Dean Wilson - Injured Shoulder
Comment: Dean Wilson crashed after coming together with Eli Tomac in Seattle, causing his shoulder to temporarily pop out of socket. The following week in SLC, Wilson crashed and further aggravated the injury and pulled out of the race. Wilson is scheduled to race in Las Vegas.

Gareth Swanepoel - Knee Injury
Comment: Swanepoel had surgery to fix an issue with the patellar tendon in his right knee and ended up picking up an infection, which will leave him sidelined until the beginning of the Nationals.

Jeff Alessi - Sprained Wrist and Broken Toe
Comment: Alessi suffered a crash in his heat race in Seattle that will put him out of action for the remainder of the supercross season. Alessi plans on returning in time for the Nationals.

Bryce Vallee - Lacerated Liver and Kidney, Two Broken Femurs, Three Pelvic Fractures, Shattered Left Elbow with Radial Nerve Damage, Fractured Collarbone and Multiple Fractures in Lower Spine.
Comment: Vallee suffered a horrible crash while leading a race at Pala Raceway. After being landed on  multiple times, he was airlifted to Palomar Hospital and underwent two surgeries, with rods inserted in both femurs and three plates and 33 screws used to repair the left elbow. After spending 25 days in the hospital Vallee was released last week. Currently, there is no timetable as to when Bryce will be fully healed. Donations for medical expenses can be made at www.brycevalleemx.com. 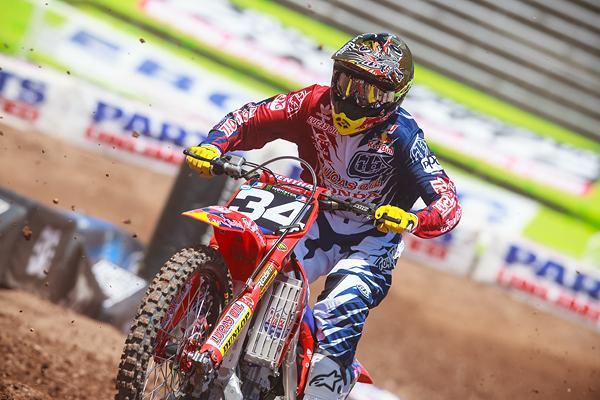 Seely is expected to miss a majority of the Nationals after a big crash in Salt Lake City.
Simon Cudby photo

Ben Townley - Dislocated Hip and Broken Bone
Comment: Townley, who was intending on racing The Nationals for TwoTwo Motorsports/Bel-Ray, underwent surgery for a femoral head-associated acetabular rim fracture. Although Townley is expected to make a full recovery, he will not be back on the bike for the Nationals.

Frankie Lettieri - Torn Labrum
Comment: Lettieri underwent surgery and is hoping to be back on the bike by the end of the Nationals.

Ivan Tedesco - Broken Finger
Comment: After getting landed on in L.A. and missing much of the season, Tedesco attempted to make his return in New Orleans after only five days of riding. Tedesco simply wasn’t ready to race yet and hasn’t raced since. Word is, Tedesco is looking for an outdoor ride and has been doing some testing with the Pro Circuit team this week. 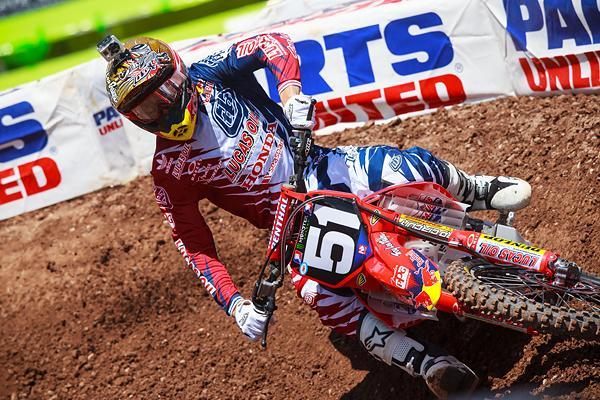 PJ Larsen - Foot and Knee Injury
Comment: In Toronto, Larsen went down hard during practice in a rhythm section, sustaining injuries to his knee and foot. He will not be racing in Las Vegas.

Josh Hansen - Hurt Ankle and Knee
Comment: Hansen underwent surgery to fix his hurt ankle, and will not be racing in Las Vegas.

Ben LaMay - Injured knee
Comment: After suffering a concussion and fractured hand in St. Louis, LaMay returned to racing in New Orleans, only to aggravate a previous knee injury. After sitting out two rounds, LaMay will return to racing in Las Vegas. 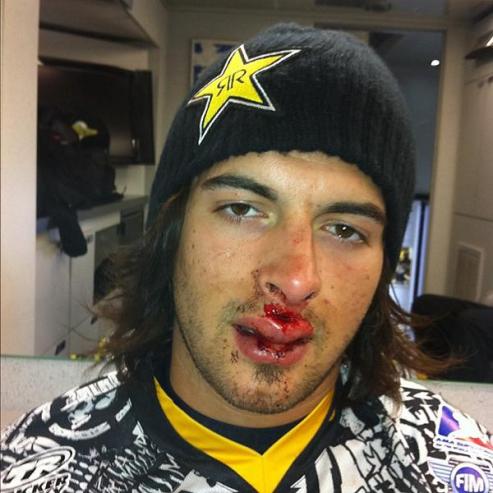 Despite a broken nose, Izzi will be racing in Vegas.
DC photo

Austin Stroupe - Cracked Collarbone
Comment: Stroupe had a big crash in Dallas, and was forced to undergo surgery for an injured collarbone. Stroupe is recovering in Northern California, and will not be racing until the gate drops at the Hangtown Motocross Classic.

Gannon Audette - Broken Wrist
Comment: Audette broke his wrist during practice in Dallas, and will be out for the rest of the season. Audette has resumed riding, and plans on being ready for the Nationals.

Tyla Rattray - Head and Neck
Comment: Rattray suffered a concussion and a fractured C-7 vertebrae in his heat race in Oakland. He was finally cleared to ride two weeks ago, and is currently preparing for the Nationals.

Don Parsons - Broken Leg
Comment: Parsons is planning on being ready for the start of the Nationals. 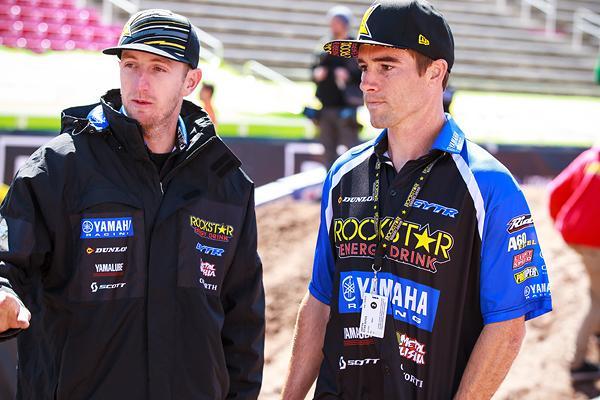 Sipes is IN for this weekend.
Simon Cudby photo

Tommy Hahn - Broken Fibula
Comment: Hahn is back on the bike, but has scrapped his plans to race any more supercross races this year. Hahn will return to the track at the Hangtown Motocross Classic for the start of the outdoors.

Christian Craig - Wrist Problems
Comment: Craig sat out most of the Western Regional Supercross Lites rounds after opting to have surgery to fix lagging problems stemming from a broken wrist he suffered last year at Southwick. As of this week, Craig has still not been cleared to ride, although the team is hoping that he’ll be ready for the start of the Nationals.

Auston Albers - Spiral Fractures in Fibula, Chipped Tibula, and Torn Ankle Ligaments
Comment: Albers cross-rutted in practice in SLC and landed wrong on his left ankle. Albers underwent surgery and is hoping to be ready for the Monster Energy Cup.