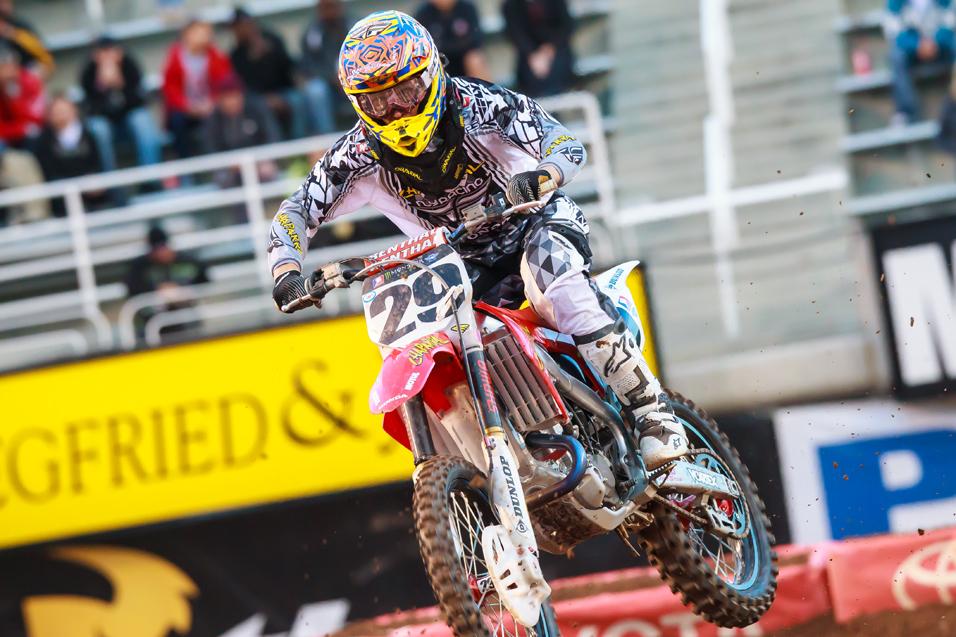 The Breakdown Semics on Salt Lake

Marvin Musquin is living proof that you don't have to have big muscles to be a top motocross racer. Marvin reminds me a lot of former MX and SX champion Jean-Michel Bayle both in stature and riding style. It also helps to compare them since they are both French. Marvin is an extremely smooth rider, using the least amount of physical energy possible to get the job done, same as JB. Both have World Championships under their belts, with Bayle going on to win U.S. titles as well. It will be interesting to see if MM can match that daunting task.

Notice in this photo Marvin has his feet up off the footpegs. The pros do this often when they are using techniques to get more height and distance out of a jump. This is because they are jumping their body weight up off the footpegs as the bike rebounds from the jump, giving them more height and distance in order to clear obstacles. This feet off the pegs technique also gives them better balance in the air and as they move their feet it also affects the balance of the bike, a lot. Of course they have developed a fine sense of getting their feet back on the pegs before they land. 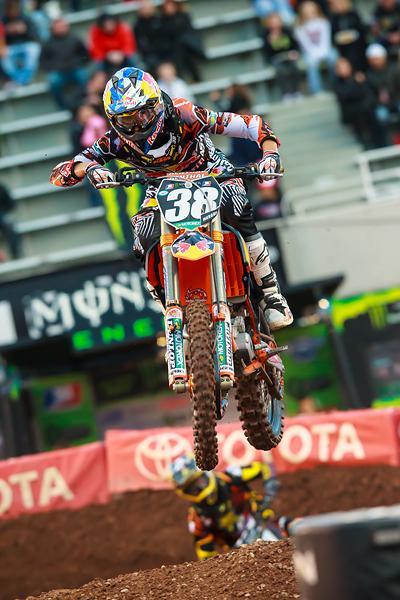 You can see from the photo that Weimer has his feet off the pegs but I don't think, in this situation, Jake wanted them up off the pegs here -- at least not that high. But since this technique is so familiar and comfortable for him he was able to get them back on the pegs in time to maintain control. Otherwise, in this situation, JW would have been in for Mr. Toad's Wild Ride. 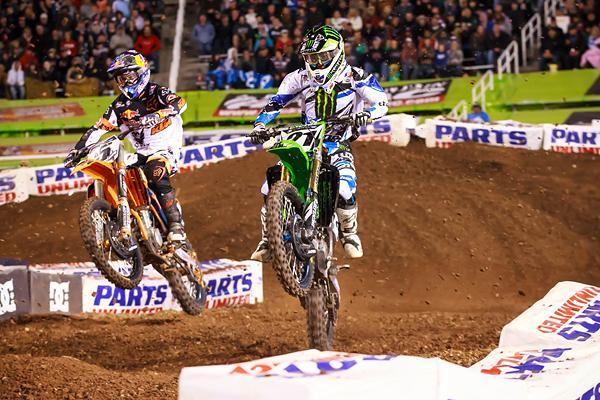 Andrew Short came back after a long layoff, due to injuries, and won the Seattle Supercross. He wasn't able to repeat in Salt Lake City but he still rode well. On top of the remarkable feat of winning Seattle it was his first supercross win ever. Andrew is no rookie. He's way closer to being at the end of this career. Okay, okay, I know what some of you maybe thinking; the big 5 (Reed, Stewart, Dungey, Canard and Villopoto) were not there, RV was injured in the first corner and it was RD's first race back after injury. But keep in mind that it was Andrew's first race back after an even longer layoff due to injury.

My point is that it takes more than strength and hard work to win races. Obviously it takes the right people working with you. Everyone needs the proper support and a good solid bike under them. Of course anyone has to have enough strength and also has to put in enough hard work, but there is a balance to everything and motocross and supercross definitely apply to this balance, big time. With all that in mind we know that having the right support, conditioning and speed is a given. A rider has to have that or there is no chance of winning or placing high. But there are other factors that also have to line up.

A racer has to stay in the right frame of mind, so to speak. He has to think, know and FEEL that he can win. There's no room for any self-doubt, fear or any other negative thoughts to occupy any of that valuable mental space between the ears. Many times a serious rider who has a lot of pressure, has other people depending on him and paying him big money with high expectations will put too much pressure on himself. This usually causes him to try to do an impossible task. They will try to make something a "CERTAINTY" that is impossible to become "CERTAIN", and that is to win races and a championship. I've seen it many times, usually in preseason; I've even been guiltily of it myself. A serious racer will want to win so bad that they end up over training and over thinking, trying to somehow guarantee the outcome they want. When they get caught in this scenario their results will suffer instead of improving, let alone winning races or a championship. 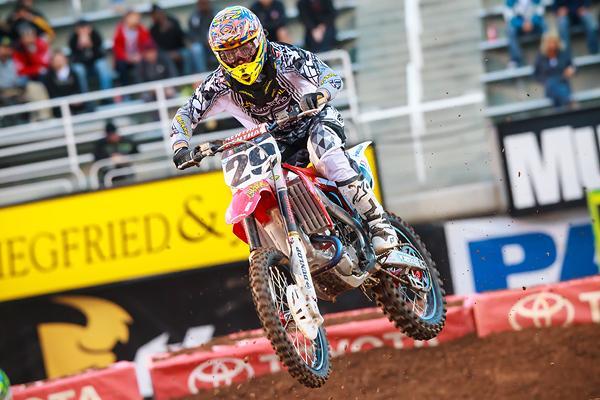 This is when they need to realize how they are thinking and change their mental approach into staying in the moment and having more fun, even in their hard work. They need to focus on being grateful for things they can be grateful for. I think this is exactly what happened to two Pro Circuit Riders this year, Dean Wilson and Blake Baggett.

Keeping an attitude of gratitude,