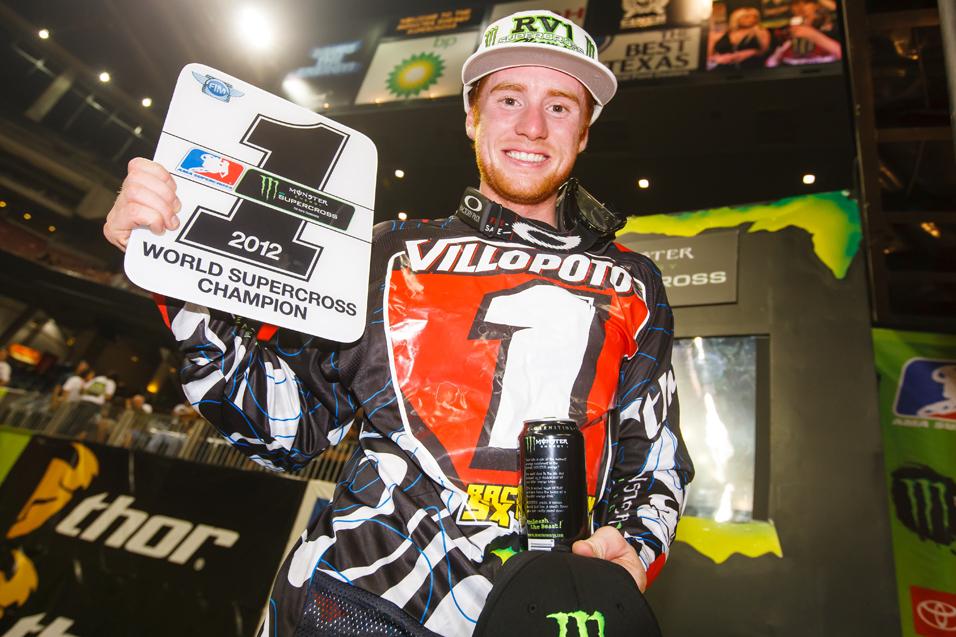 April 19, 2012 11:30am
by: Jason Weigandt
Qwest Field Seattle, WA Seattle Monster Energy AMA Supercross Championship
We already know Ryan Villopoto wrapped up this year's Monster Energy SX Class Championship earlier than anyone in history, but did you know he also wrapped up a Lites SX title faster than anyone, either? On February 17th, 2007, RV clinched the 2007 Lites West SX title. Yes, in February! He had won all but one race—Phoenix, which went to Christophe Pourcel—but Pourcel was soon out of the series with a broken leg, and there weren’t any challenges left for RV. After that, there was nothing but domination and a number-one plate for Ryan.


Wrapping up a supercross championship in February is impressive, but what RV did this year is even more amazing: He managed to lock up the SX Class title before either of the Lites titles were clinched!

Considering that the 450 Championship goes down to Vegas and, up until last year, Lites East did not, this is not easy to do. On most occasions, both the East and West titles are clinched before the big bike title. In fact, we could only find one other occasion where a rider wrapped the big title before either Lites or 125 Championship's had been sewn up. Villopoto joined McGrath as the only two riders to clinch an SX title before either Lites/125 titles were claimed.
Simon Cudby photo

Of course, that happened in the 1996 season, when Jeremy McGrath completely and totally dominated the 250 class to the tune of 13-straight wins, and 14 total in 15 races. In 1996, MC clinched the title at Pontiac, Michigan, with three races to go. Meanwhile in the 125s, the championship favorites ran into trouble and had to mount comebacks to grab their titles. Kevin Windham broke a collarbone out West and missed San Diego, so he had to go all the way down to the season finale in Denver to clinch the #1. And in the East, Mickael Pichon crashed out of the Atlanta opener in a huge wreck, putting him way down from the start. He managed to reel in John Dowd to clinch the title in Charlotte, a week after McGrath did.

This year, Villopoto clinched the SX Class crown a round before Justin Barcia wrapped up the East Lites title in New Orleans. After a few nail biters last year, RV is surely happy to get back to his old habits of wrapping this stuff up early.