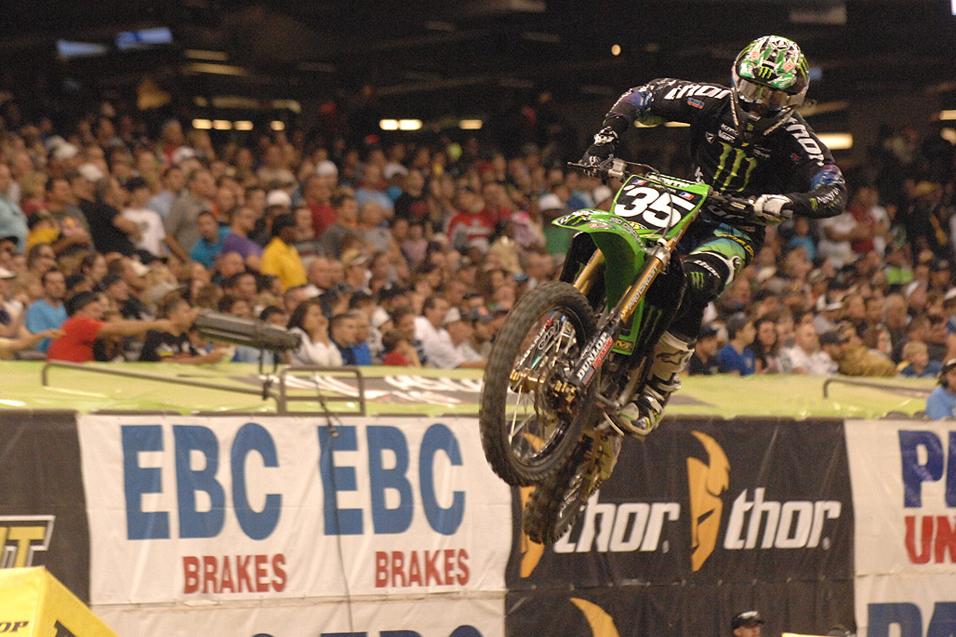 In New Orleans, Monster Energy Pro Circuit Kawasaki's Darryn Durham broke through for his first career win, and we grabbed up the happy winner for this week's Monday Converation.

Racer X: Did you have a feeling this was going to happen? Did you feel like today was something special, even going into the main, at all?
Darryn Durham
: No, I thought today sucked! Like all day. I was bummed out. Even after the heat race, I was just sitting up there like dude, today sucks.

You just weren’t feeling it?
Yeah, I just didn’t flow with the track too good earlier. And then I got out front and I just made sure I hit all my lines. Like I wasn’t overriding at all. I made a couple little mistakes, but all in all, it was a good race.

What about the track? Was it the issue? Was it slippery? Was it hard?
Yeah, the track was slippery tonight and just weird. It didn’t flow real good. But I’m not complaining about it anymore!

When you were in the lead, was there any pressure? Were you getting nervous?
Yeah, well I jumped into the tuff blocks and almost threw it away. After that, I got a little sketchy, then I gained composure again, pulled it out a little bit. Then the last three laps, I was just trying to cruise it in. I saw Blake [Baggett] was coming. He got a little bit closer than I wanted him to, but I felt like I had it under control. 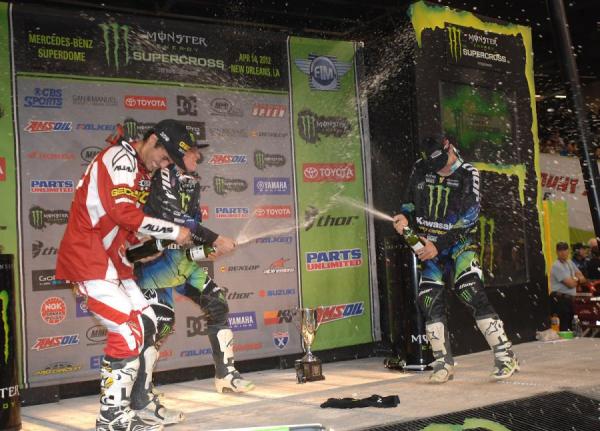 So, the last couple of laps, you were just trying to maintain it there?
I was thinking too much, honestly. I was like “Man, that win’s gonna be nice tonight!”

I don’t think a lot of people realize this but not only is this your first win, you didn’t even have a podium finish in your career until this season began. This is all a new experience for you.
Yeah, for sure. I kind of built myself up all year. This year I started off on the podium, then I got a few more. Then the last two races weren’t that good. But I think I was trying a little too hard. But I don’t know. I’m going to try and win more, you know?

Now I have to ask the standard “did it sink in yet” question?
Not yet. I don’t know. I guess yeah, kind of. Once you go home, you watch it on TV, you get to look at your trophy sitting on the mantle and you’re like “Oh yeah, I won.” It’ll probably sink in a little more tonight when I hit Bourbon Street.

When you crossed the finish line, did you scream?
I don’t know. I mean, I’m a little bummed on that because I always told myself if I won, I was gonna' go nuts. Well, I didn’t go nuts! I’m bummed on that. I did a nac-nac when I won my first heat race. I always told myself that when I won a main, I was going to ghost ride my bike like [Brian] Deegan or something and I didn’t do it. I’m pissed at myself!

What was running through your mind? Like do you even remember why you didn’t do it?
No, I didn’t even think about it! I went over the finish and I saw the checkered flag and I was like “oh man, I didn’t do anything!” I better whip it or something at the last second. So I did this little lame-ass whip. Then I didn’t do a victory lap or anything. I should have like pitched the bike after.

Or even a burnout.
Yeah!

You’ve gotta get another win, then.
Yeah. I apologize to all my fans for that one. And my friends. Like I always told everyone my whole life that I was going to go nuts and I didn’t go that nuts!

Durham had late pressure from his teammate Blake Baggett, but was able to hold on in the Big Easy.
Carl Stone photo

Well, onto bigger and better things. You have won a race. And think about where you’ve come from! A year ago at this time, you were pretty much hurt, but more importantly, you had a shot at a factory team right off the bat. And then you were slumming it privateer style. I mean, you have gotten back up here. That’s pretty impressive.
Yeah. I mean, I came in as a rookie and had an okay year. Kinda’ lost track a little bit. Then I gained it back last year. I got my shit together and I started going fast and it got me here. I still got my shit together. I’m still going fast.

But were there times when you were afraid it wasn’t going to happen?
What, getting a ride?

Yeah, winning races. Getting a ride, making a living at racing.
Yeah, I mean even last year, I felt like I could win races. I thought I could win races on my bike last year. It just takes doing it to, like, do it. You know what I mean? And I finally did it and I think it’ll get easier. That’s what I’m hoping.

But you were never at the point, maybe two years ago or so, where you were like “Man, I don’t think this is gonna’ work? I don’t know if I’m going to make money at this and succeed like I thought I could.” Were you worried about that?
A little bit. I told my dad if this doesn’t work out, I wanna’ do freestyle or something. 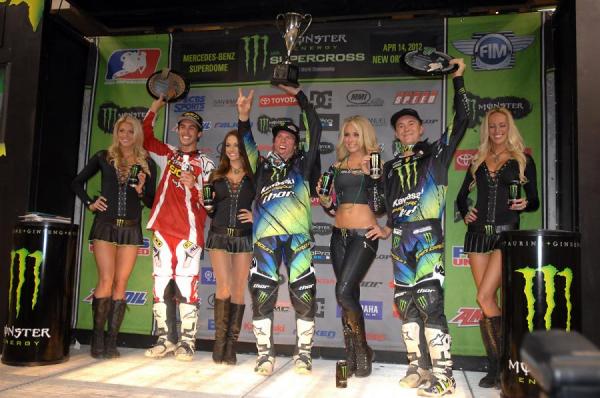 Durham (center) is now tied with Ken Roczen for second in points after his win in New Orleans.
Carl Stone photo

No way! Are you serious?
Yeah, so my text message from him after the main event is “Okay, now you can do freestyle.” That’s what he said.

Really? That’s awesome!
Yeah. I don’t know, I just like to ride. Any way I can make money riding a dirt bike.

So you were never that down in the dumps? Like, you just ride. You just have fun.
Oh, yeah. I never got down about it. I lost, I was paying out of my pocket to go racing, but I was still having fun, you know? But it’s all good now.

How much easier is this going to be now that you’ve got a win? It’s got to make a difference.
Yeah, I think it will. It’s definitely a confidence booster. Yeah, we’ve got time off. I’m really looking forward to outdoors. I actually didn’t even ride surpercross since Houston, before this race. I rode outdoors the whole time. So that’s why I was a little rusty in practice, qualified ninth. Then by the main, I started figuring it back out. It was like alright, now I remember this!

So you’re going to be ready for outdoors.
Yeah, I plan on being ready. I just want to win High Point. That’s all!