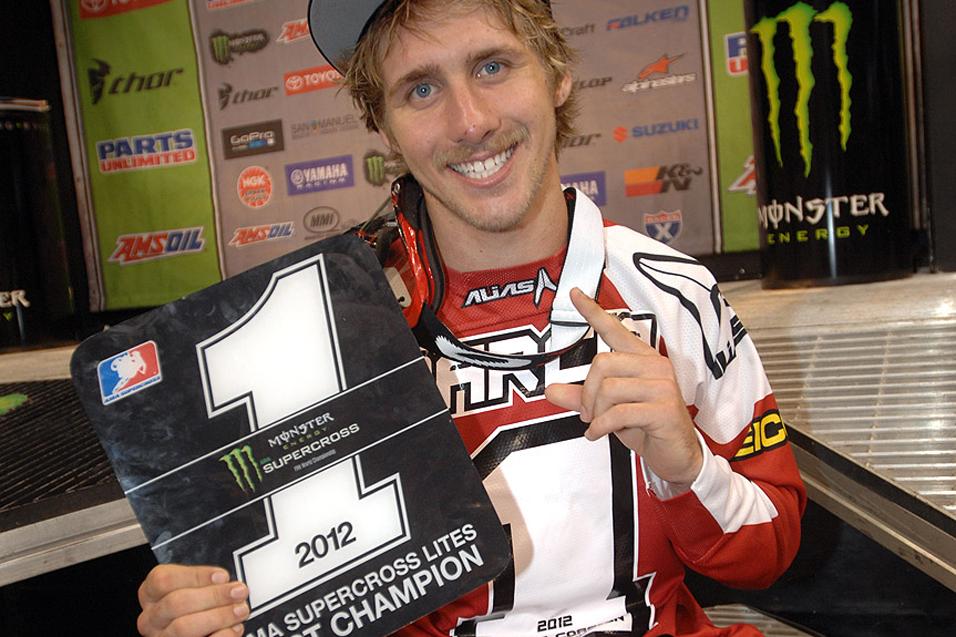 Advertisement | Advertise with Us
Superdome New Orleans, LA New Orleans Monster Energy AMA Supercross Championship
Justin Barcia always carries the rep of a gnarly dude, but the pressure of locking up the East Region Lites Championship sapped him of some gnarly-ness. After his fourth-place finish—which was enough for him to clinch the title—he told us he was actually really nervous in the main event, and, as a result, couldn’t get very gnarly. Here is the, now, two-time Lites East Champion for this edition of Insight.

Racer X: You’re champ again.
Justin Barcia: It’s crazy man. Worked real hard. Another championship for the team and for me is awesome. We worked really hard for this and, it wasn’t easy, that’s for sure. There were definitely some ups and downs.

Well, what about tonight? Were you thinking about the title? You had good laps and bad laps.
Dude, it was terrible! It was a terrible race. Honestly it was the worst race, ever!

Well, what happened?
I had a good start. I think it would’ve been a different story if I’d have gotten that holeshot and was able to ride my own race but I wasn’t because there were guys close to me. The guys were gnarly tonight. They were putting it in super hard. And it’s like you have to watch your insides and then you’ll have a guy block pass you and a guy go around the outside. So it was like the way this track was, it was so tough to protect your inside lines. So it was just a really gnarly race. I was going for it, but at the same time, I was thinking about the championship. So it was tough. 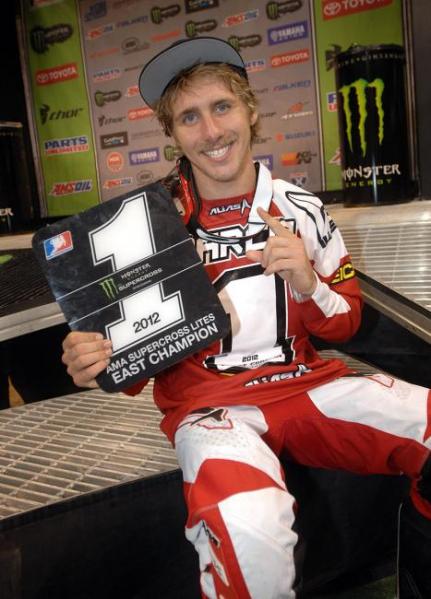 So you were thinking about the title a little bit? You weren’t nervous, but you were a little conservative, maybe?
No, I was pretty nervous about it!

You were? Even with the big points lead?
Yeah, because it’s tough to have a lot of pressure on you to bring home a championship this weekend.

Speaking of healthy, last year in the outdoors, you were really in a bad spot because you had the broken wrist and stuff. How much better do you think your situation is now? You’ve got your title wrapped up, you’re not hurt. It has to be much better.
Well what’s awesome about wrapping this championship up is that I have plenty of time to get ready for the outdoor series. I go to California Monday, start testing and getting ready. We’re still getting ready for outdoors for sure. I have plenty of time to get ready now. 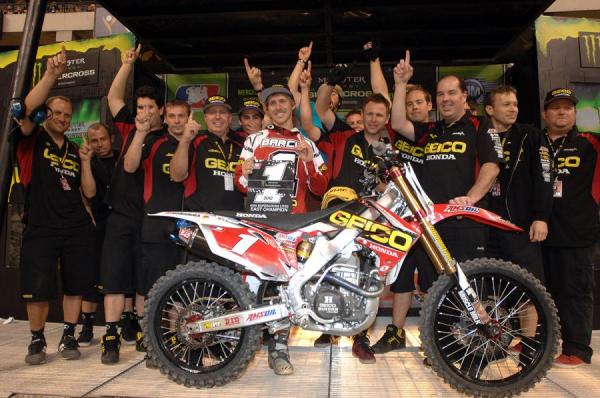 Having wrapped up the title early, Barcia and the GEICO Honda squad can now concentrate on outdoors.
Carl Stone photo

Last year it wasn’t the ideal situation to get ready. You had a bad wrist throughout supercross, for starters, and you had to go to Vegas to wrap the title.
No, it wasn’t a good situation at all. I was sick and hurt and had mono, it was just disgusting, and I had injuries. This year, I think it’s going to be a new story, you know? I’ve got another championship, so that’s awesome, and now we’ll focus on outdoors I think we’re going to be strong this year. The bike’s come a long way and so have I.

One more thing: Did I really hear Justin Barcia saying the guys were riding gnarly tonight? You enjoy that, don’t you?
Yeah, I do enjoy that, but tonight I definitely did not enjoy that with all the pressure to get the championship. I wanted to ride aggressive back, but I had arm pump so bad that I would have gotten whiskey throttle! I was so tight tonight, and it sucked.