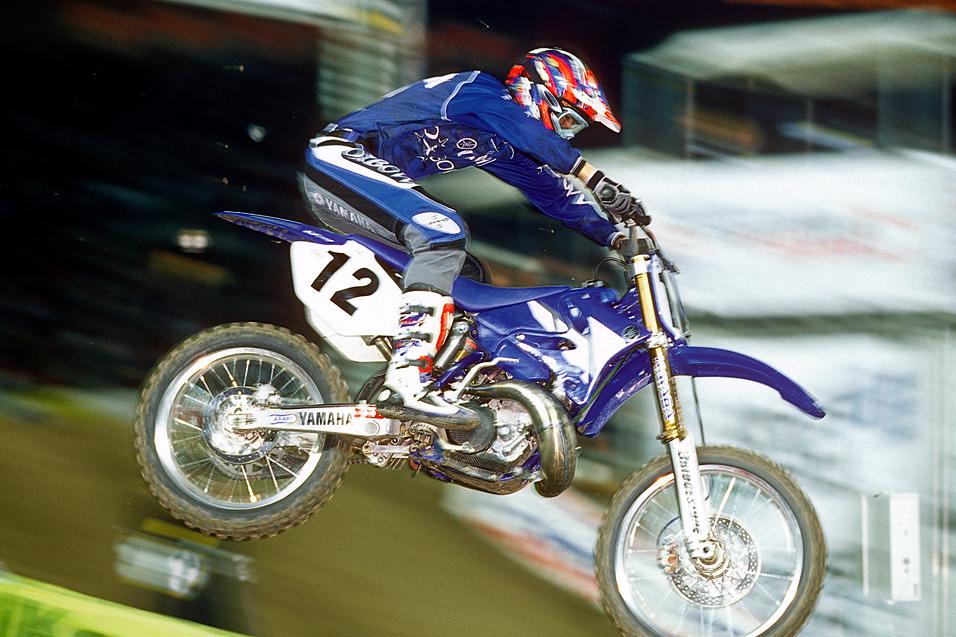 This Week in Yamaha History: Indy 2002

March 16, 2012 11:15am
by: Jason Weigandt
Lucas Oil Stadium Indianapolis, IN Indianapolis Monster Energy AMA Supercross Championship
A few weeks ago in This Week in Yamaha History, we discussed Damon Bradshaw’s final SX win—at Atlanta in 1993 —and how no one would have realized at the time that he wouldn’t win another.

The story is the same this week, as we cover David Vuillemin’s final SX victory, at Indianapolis in 2002. But it certainly seemed like DV had more wins to come, because the Indy victory may have been the most impressive of his career.

“That was the race where we had a three-way battle with Ricky [Carmichael] and Travis [Pastrana],” explains DV today. “The track was pretty sketchy and pretty rutted. But I felt like I was on my game back then.”

The much-anticipated Carmichael/Pastrana battle gobbled up all the attention at the beginning, as Travis grabbed the early lead, bobbled and lost it, and then retook it when Carmichael swapped in the whoops. Vuillemin was back in third stalking them. Then things broke loose when Pastrana got sideways in a rhythm lane, and tried to get back to the inside to block RC. They collided and Pastrana went down, handing Carmichael the lead. The fans, enamored with Travis, rained boos down on RC, for what they perceived as a take out. 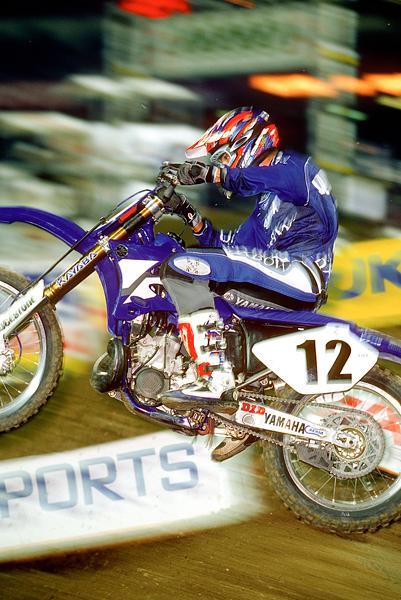 Regardless, with defending SX Champion Carmichael out front, the race looked to be over. But Le Cobra continued to wait, planning a last-lap attack. “I knew I had a couple of places to pass, but I knew I didn’t want to pass Ricky too early, because Ricky is Ricky, and he will never give up,” says Vuillemin. “I had different lines, I felt really good in the whoops, he was going in the main rut in the whoops and getting sketchy through them, and I was using a fresh line on the outside. It was sketchy to try to wait until the last lap to make the pass. The same thing had happened in Dallas once, I was waiting behind Ricky, but I made a few mistakes toward then end and he improved, so I couldn’t get him. It’s like 50/50 if it’s going to work out.”

The white flag came out with Carmichael leading, and that’s when Vuillemin struck over the over/under tunnel. “It was tricky to go inside in the corner after the tunnel,” says Vuillemin. “It was like a single to the tunnel, and the landing to the tunnel was really steep, so if you clipped it even a little you couldn’t go inside. All moto I was trying to get the downside of that tunnel jump perfect so I could get to the inside. Ricky was clipping it a little bit and going wide. I knew it was a lap to go, so I had to go for it—I went to the inside and got the lead.”

From there, Vuillemin pinned it to the finish and held on for a dramatic win. “You can hear the crowd pretty much every race when you make a good pass. I remember they were booing Ricky when he collided with Travis, and it wasn’t really Ricky’s fault, I remember the crowd was pretty bad against Ricky that night, and when I passed him, I remember it was pretty loud. I felt kind of bad for Ricky, he was always a good guy to me, always very nice. Too bad I got hurt a few weeks later, I would have liked to have more battles with him!”

Indeed, Vuillemin hurt his shoulder in a photo shoot two weeks later, and while he completed the rest of the races that season, he never found the speed to defeat Carmichael again. But he looked back on his victory here with great pride.

“This one was good, and also the ones against MC in Phoenix and New Orleans in 2000,” he says. “I think all the wins are good, especially when you beat legends like that. It doesn’t happen every week! It was an honor to race those guys.” 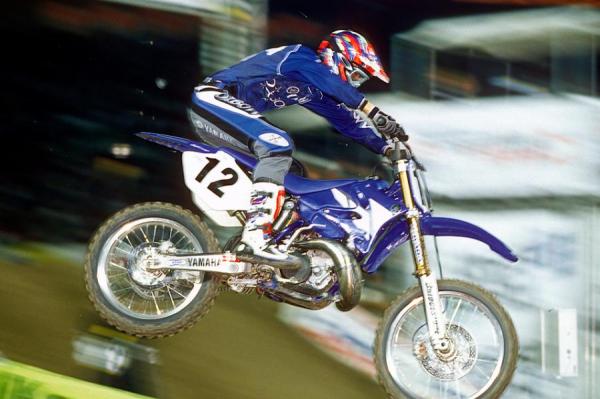 Vuillemin extended his 2002 season points lead with the Indy win, but a shoulder injury a few weeks later would end his hopes of holding off Carmichael and taking the title.
Racer X Archives