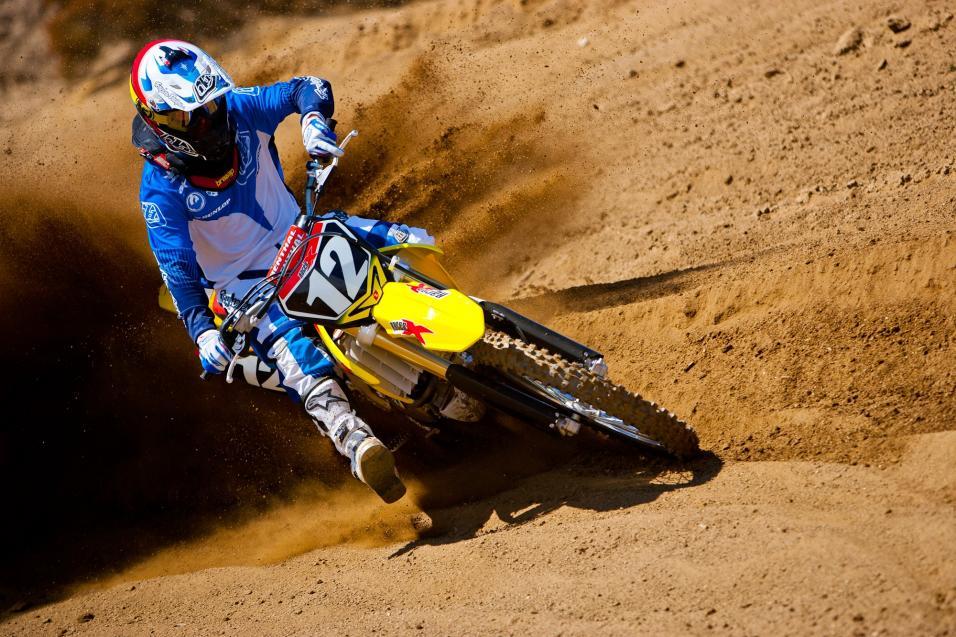 The Daytona Supercross shows us yet again how anything can happen at a mud race...anything but somebody staying as incredibly clean as Marvin Musquin that is. How can that happen, how can somebody race 16 laps in a muddy swamp, with 20 other riders, finish in 4th place, lapping at least 4 riders (some more than once) and finish as clean as they started? It just seems impossible that he did not get at least splashed with dirty water from his own front fender along the way at some point.

Is mud afraid of Marvin Musquin? Did he use a Jedi mind trick? Did his riding gear have tear off's? Is he pals with Rosie Ruiz? Is his secret a "French" thing? How did Marvin do it Ping?

It IS impossible. I know this blows your cerebral cortex right out of your skull but the answer is… he put on a new jersey. Yep, it’s that simple. In order to get his sponsors some exposure he put a clean jersey on before jumping in front of the camera. I actually had a pretty good joke about how the mud was repulsed by the B.O. surrounding the French rider’s jersey but the truth is that Marvin is a good dude and he’s never disregarded the need for deodorant when I’ve been around him. I’ll keep that joke in my back pocket though, just in case.  He wasn’t dodging drops of mud and water like Neo missing bullets in The Matrix and there were no sneaky French tricks or track cutting involved. Marvin rode a great race on his 350, finished fourth and had the foresight, or confidence, to have his crew bring an extra jersey up from the pits. I’ll bet the other guys on the box wish they would have thought of that.

Social media has revolutionized communication across the world.  The word “like” isn’t just for valley girls anymore and going “tweet, tweet” all day long won’t get you sent to one of those medical resorts where you get to wear long-sleeved, white lab coats.

And while I appreciate the connectedness social media brings to the world generally and motocross media specifically, I’ve also begun to wonder if it’s all getting a little out of hand.  A few days ago Racer X said, “Craving breaking news?  Don’t worry the Racer X online twitter account (@racerxonline) will be cranking out all the breaking news…” and shortly there after I saw this message, “On Instagram?  So are we!  Follow @racerxonline for a completely different look at the races and riders...”

While I know being connected and up to date is important, my question is why aren't Facebook and Twitter enough?  I don’t want to have to join/follow/like or friend Racer X on Google+, Foursquare, LinkedIn, Friendster or Pinterest to get my MX/SX fix.  And MySpace is, like, so many years ago.  When will the insanity of social media site overload stop?  Will social media be the next tech bubble to burst?  And don’t people realize that most of the good stuff will end up on www.racerxonline.com anyways or is that a secret?

Anyhoo, I’d rather not have Mark Zuckerburg read my text messages, the iPhone people track my every move or Google know more about myself than I do so I’m thinking of moving to Montana to join a cult…

What do you think you twit face you?

Hey, I’m the last guy to get on board with these social media disasters. I still don’t have a Facebook account and I think there are only about nine of us left on the planet holding out. It not because I don’t think it works. I mean, if I were a single guy I would have the most awesome page setup ever, complete with photo shopped images of my chiseled abs. If you are looking to get reconnected with old girlfriends and every skank within a sixty-mile radius of your home you need to get on Facebook immediately.

Twitter I actually enjoy because I don’t have to respond to anyone but by following the right people I actually get some interesting information and some funny stuff too. I’m going to go ahead and estimate that 85% of all my tweets are sent from the toilet. That’s the other thing I love about Twitter… it’s become my new time killer while I’m on the thinker. Instagram is pretty cool because everyone likes photos but the rest of it all is just ridiculous. Who has time to manage all those things? Single people without children would be my guess.

Please don’t move to Montana… it’s one of the last good places we have here. There are plenty of good bell towers in Texas you could post up in. And once you get nice and cozy up there, send me a tweet or a photo on Instagram.

I have grown up in BMX & MX racing as well as action sports competition for 24 years now.  The level of disrespect constantly shocks me and willingness to talk shit or go to blows in the MX industry, mostly on the local level.  I have no doubt in my mind that as a group, motocross riders and parents are by far the most un-grateful and disrespectful towards track owners and race promoters of any other sport I have witnessed or participated in first hand.  Is it because of the large investment made to participate in motocross that causes this panic rev attitude?  Is there no concept whatsoever for what it takes to run heavy equipment and prep and water a track every day for riders?  No respect or thanks for the effort put in by a dedicated few so that ungrateful angry mob of people can post garbage anonymously online?  I'd just like to say that people who post this trash talk, create websites that harvest this activity or tell people not to ride somewhere because they aren't happy with one thing or the other about a track are not true motocross people.  At least not the way I grew up in the sport.


You have seen this industry closer and longer than most so I'd love to hear your thoughts on this?  Is it getting worse?  What's the solution?  For me I will continue to ride with my true moto buddies.  I will support any track that opens its gates for me to ride.  I don't have the money to run a track so I will happily pay my fee at the gate or required membership because anything is better than not having a place to ride.

Somebody is bitter. I think you are grouping all motocross riders/racers together unfairly though. I would suggest that your experience is based more on your geographical location than the type of people involved in this sport. Now, I know there are idiots everywhere you go. There is no haven from which you can escape them. But for some reason an unreasonable number of them have flocked to the very southwest tip of this country and purchased dirt bikes. It’s an enigma. I’ve watched people throw trash out of their windows as they drove out of the track, parents fight with other parents over a parking spot, mini bike dads throw stuff at their kids when they don’t do well… It’s like a real-life tutorial on what kind of person NOT to be. But I’m telling you it’s worse here than other places. Go to a race in the northwest sometime. Go to a race in Montana, the Midwest, the northeast or even down in the dirty south and I’ll bet your experience would be much different. I understand the effort and financial commitment it takes to keep a track running and I appreciate it. But it also takes a huge effort and financial commitment to compete in this sport. That doesn’t excuse people to act like A-holes but you can see where tensions are high as they hand over their hard-earned cash at the gate.

As far as websites that talk trash, don’t even get me started. There is no civility in that realm. The morons that talk trash on those sites will just drag you down to their level and then beat you with experience. Just enjoy riding with your buddies and tune out the white noise.