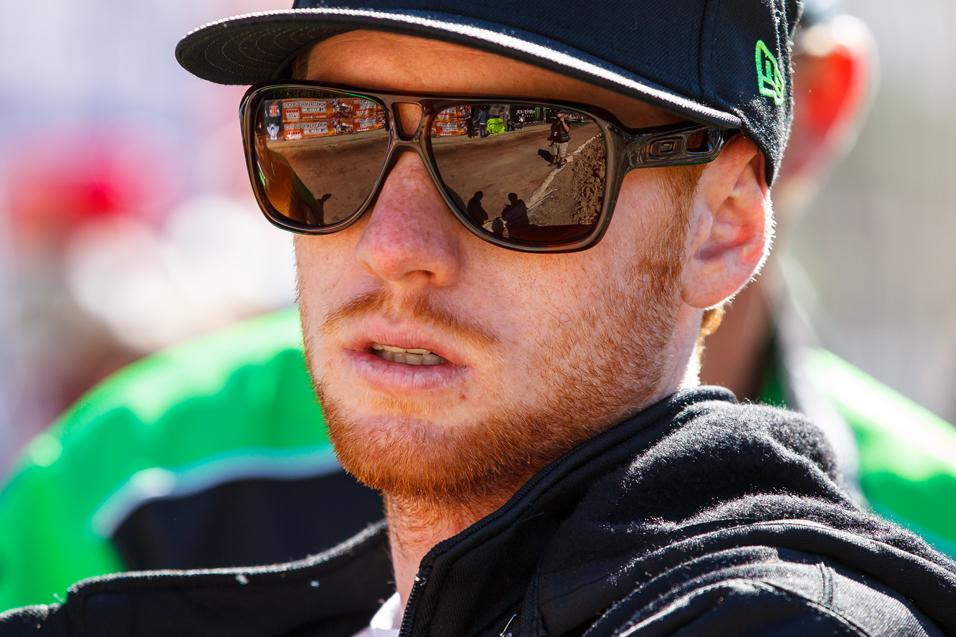 Advertisement | Advertise with Us
Daytona International Speedway Daytona, FL Daytona Monster Energy AMA Supercross Championship
It went like this heading into the 2008 AMA Motocross Championship: “The big names are in the 450 class and you know who the players are, but the Lites class, that is wide open.”

Really? Ryan Villopoto was back to defend the Lites Championship he won in 2006 and 2007. Yeah, Trey Canard had upset Villopoto for the East Region Lites SX title; Jason Lawrence and Ryan Dungey had just battled hard for the West Region SX title, and Villopoto’s new teammate Austin Stroupe was fast. But outdoors, RV had taken down all comers for the last two seasons. The real story wasn’t the Lites competition; it was just how damned good the defending class champion was. But we missed it.

It’s that way, still. We have witnessed plenty of greatness over the last few generations, and RV is quickly—but somehow quietly—running up stats to match the best of ‘em. Yet, somehow, Villopoto operates under the radar that a superstar of that stature should command. RV gets cheered in opening ceremonies, but he doesn’t get the most cheers. He also never gets booed. Drama has followed those he has battled, like Mike Alessi, Lawrence, Dungey, James Stewart and Chad Reed. Villopoto operates without any of it.

How can this be possible? Why are fans and industry folks not picking at every thing Ryan does right and wrong? Why are we not in ass-kissing awe or constant want of more? 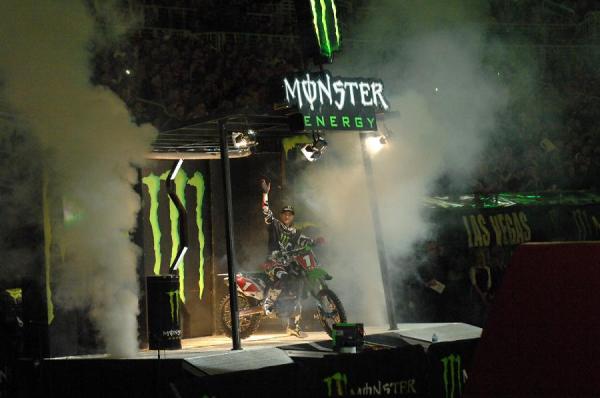 You may not hear the loudest cheers for RV during opening ceremonies, but one thing you never hear is boos.
Photo: Carl Stone

Here’s something I can come up with. I have a one-year-old daughter at home, and people who are planning (or expecting) kids often ask me what it’s like. But I can’t give them a balanced answer. With kids, it’s very easy to articulate the rough stuff—the sacrifices and life changes that drain you of sleep, energy, patience and freedom. I’m not going to lie: having a kid is not easy, and I can easily explain why. But even I, a person who is paid to come up with words for a living, cannot eve remotely describe the positives. There just are no words to describe the good stuff. All I can tell you is that it’s awesome. That’s all I’ve got.

Villopoto’s strength is his lack of weaknesses. There are no flaws in his game, no endless conjecture over what fans wish he could do or could be. We don’t wish he could work harder or get better starts or be in better shape or get more aggressive or overcome some sort of mental block. He is the model of what should lead to success: talent, combined with hard work. He does not lack for speed or aggression or effort or fitness. He isn’t held back by bad starts or crashes or injuries. His team is solid all around, with never any troubles to be seen—heck, his old Monster Energy Kawasaki Team Manager Mike Fisher came and went and yet you’ve heard nothing about the impact on Ryan. The drama never seems to stick to RV.

But drama is easy to talk about. Negatives are easier to discuss. We can go on and on about what our jobs, or girlfriends or friends do wrong, but when it comes time to dump praise, we run short. There is nothing wrong with Ryan Villopoto. So what is there to talk about?

Even Dungey, as neutral and controversy free as he strives to be, ends up polarizing fans and getting the conversation going because he’s so neutral. A few years ago, Dungey sparked endless conversation about his mental toughness, his ability to close out championships, and, of course, Jason Lawrence getting “in his head.” Those stories have long since gone away, but they were a big topic at the time. Meanwhile, Villopoto won titles immediately, so he never once endured such talk. He also had a few J-Law dustups, but he silenced that issue the only way he knows how: by beating him soundly and completely on the track. No back and forth, no trash talk, just pure scoreboard. Next issue, please. 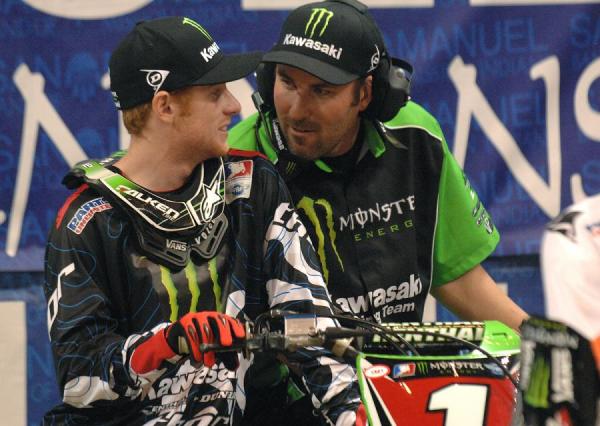 You almost never hear of any drama coming from RV and the Kawasaki camp.
Photo: Carl Stone

Today, Dungey can still polarize with either praise for his consistency or cons for his perceived lack of aggression. With Villopoto, there is neither. He is not known as a dirty rider but is also not known as someone who could be intimidated or pushed around. He is aggressive enough. He is not known as crash or injury prone, but he has crashed and bounced back enough where no one can question his toughness, either.

Reed? Stewart? Please, no one has gone through the boo and cheer wringer more than them. Even Ricky Carmichael has ridden on both sides of that fence. And if Trey Canard was able to get back on track and roll again, he’ll pick up attention from the positive side—everyone likes to like Trey, and everyone likes to talk about how much they like Trey. Although it’s true we can’t find as many good things to say about the people we like as we can bad things to say about the people we don’t—with Canard, we’ll stretch and extend the positive talk as far as it can possibly go.

Villopoto, meanwhile, is not the most dynamic interview ever. But you don’t hear stories of him snubbing fans or press, either. He doesn’t play weird power trip games, or act any differently no matter how often he wins. Almost every rider, when they get to the very top of the summit where Villopoto is right now, ends up making a few strange demands on his team. Maybe they pull a sponsor on board, or have run-ins with a teammate. But RV has never had such problems. He spent the summer of ’07 locked in a wheel-to-wheel battle with Ben Townley, yet their friendship grew through it all. We braced for trouble when Villopoto was teamed with Reed in 2010, but Ryan immediately told me, “It only becomes a problem if you make it a problem.” They ended up having no problems with each other, even though everything else with the Reed/Kawasaki team-up ended badly. Today, his teammate Jake Weimer is a training partner. Everything Villopoto does is available for other Kawasaki riders to see.

It also appears Villopoto and Dungey are going to keep their on-track rivalry above the tabloid drama. There will not be any bad blood here. There were hints things would go sideways between them a few years ago, as RV was pretty gruff about losing his shot at 2010 championships with injury. But last year, they decided to take the high road. After shaking hands at Pala last year and teaming up at the MXoN, they congratulated each other after each race. 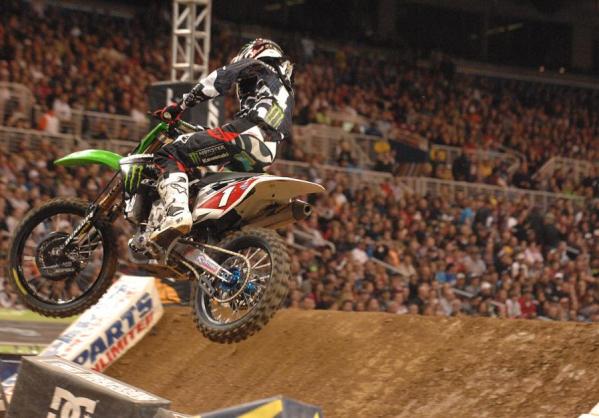 Ryan has had signature rides. Last year’s performances under pressure should be the stuff of lore, but his greatest day came at the Motocross of Nations at Budds Creek in 2007, where he blew the world away in both motos on a 250F. In the most historic motocross race of all, RV logged one of, if not the, greatest performance in the history of the event. And yet, stories of des Nations legend seem to focus on wilder stuff, like Danny “Magoo” Chandler coming out of nowhere to win four motos in ’82, or Johnny O’Mara getting seconds on a 125 in ‘86, or Paul Malin ending the U.S. win streak in 1994. Those rides live on because of the star-crossed history of the riders that did it—Magoo never really won like that at any other time. Same for Malin. And O’Mara had struggled a bit throughout the ’86 season and was logging his last ride for Honda. See? They each had that little bit of negative coming into the race, which made the win extra special. All RV did in 2007 was kicked everyone’s ass.

And he’s doing it again right now. This season has been one of heartbreak for Trey Canard and Chad Reed, underachievement for James Stewart, and a big brand switch for Ryan Dungey. Meanwhile, while those stories steal headlines, Villopoto just keeps on winning.

Bottom line: Villopoto is so good; we forget to notice his greatness.