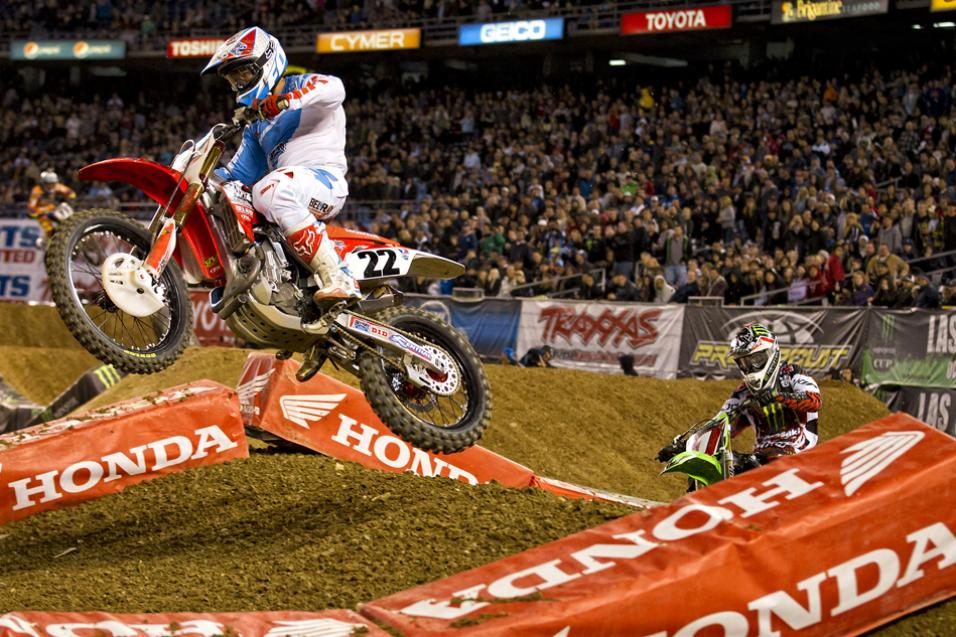 Words and Photos by: Gary Bailey

Earlier in the week when Racer X asked me to write The Breakdown for San Diego, I began thinking about what photos I should shoot. As I watched the first practice round, I got my answer because it was readily evident that things where going to happen in the whoops. And, just to be clear, when I say I knew things were going to happen in the whoops, I do not necessarily mean good things. As the race unfolded, I also knew that passes would be key in the last few close laps.

Let’s breakdown what went wrong, then focus on the best way to handle the whoops and finish off with a little about “the pass” and “the re-pass” in the 450 Supercross main.

Although I shot hundreds of shots, let’s focus on just a few of them to see what we can learn.

As we saw in San Diego, the whoops can be a good place to pass or a good place to lose it all. An important point here is that if you want to get through the whoops with the best momentum you need to keep the bike as flat as possible. If you watch Ryan Villopoto going through the whoops, you will see that his front wheel will touch the top of as many whoops as possible. If you touch the front wheel on the top of the whoops, the front wheel cannot go in the bottom of the next whoop, which is what you want to avoid. When your front wheel touches the top of a whoop, it will rebound to the next one. If you miss the top, your front wheel will drop into the bottom and it will let the forks compress and then when the back end clips the next whoop with the front down, the rear will kick up and you are in trouble. 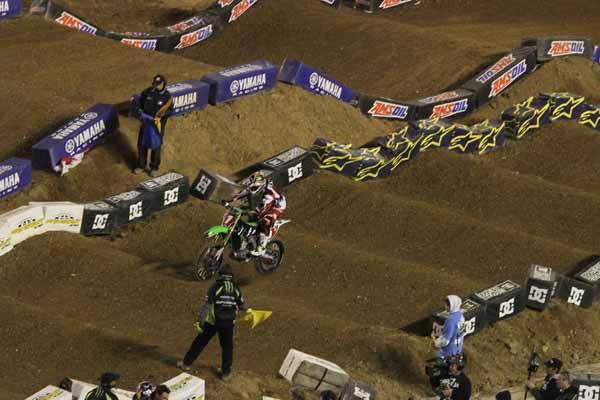 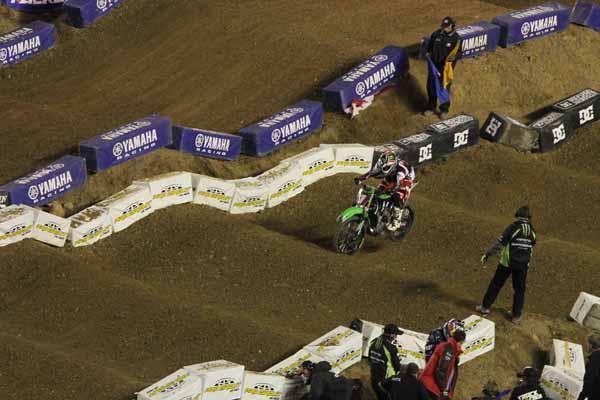 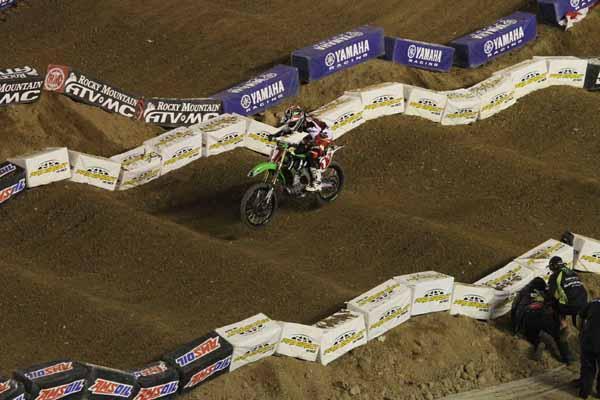 It is a good idea to keep a finger on the clutch through the whoops so that if something goes wrong, you can pull the clutch in to help control the power. By controlling the power with the clutch you avoid chopping the throttle or shutting off which is how most inexperienced guys reac,t and we all know that is a really, really bad idea. Most of the best guys have a finger on the clutch through the whoops. Yeah, that would be Villopoto, Dungey and Reed. I will talk more on this later. 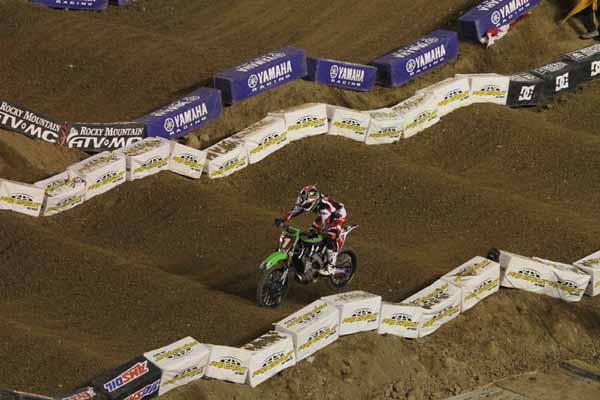 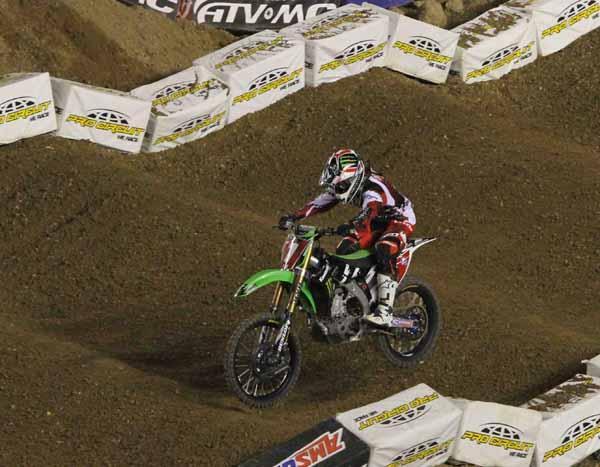 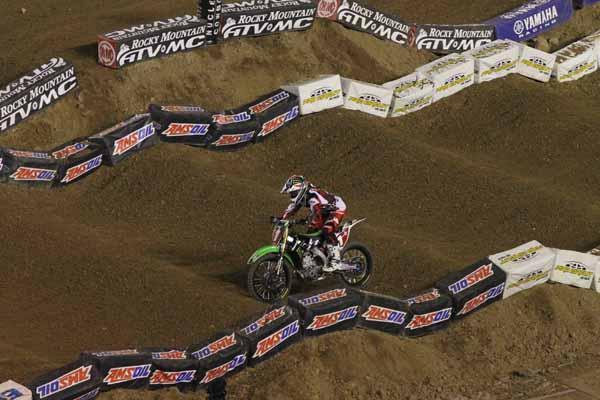 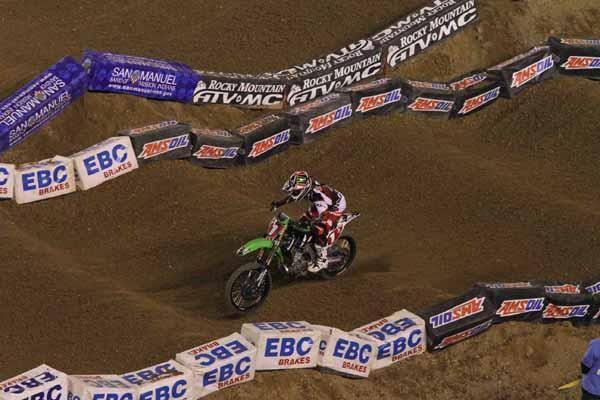 Here it is, to be one of the best in these kind of whoops you have to try to touch the top as much as possible with the front wheel, keep the bike flat so the rear end won’t slam into the face thereby stopping your forward momentum, stay on the balls of your feet, and perhaps the hardest part, you must commit to the whoops in order to stay on top. 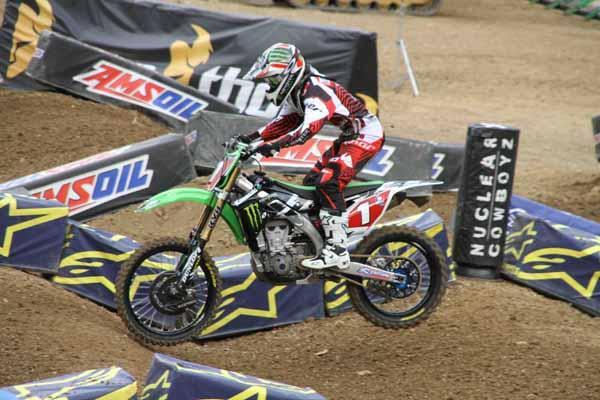 Here is another one of James’ big crashes. What happened?  Well, on this one he got a little too close to that tough block, got the peg hooked and there he was on the ground. 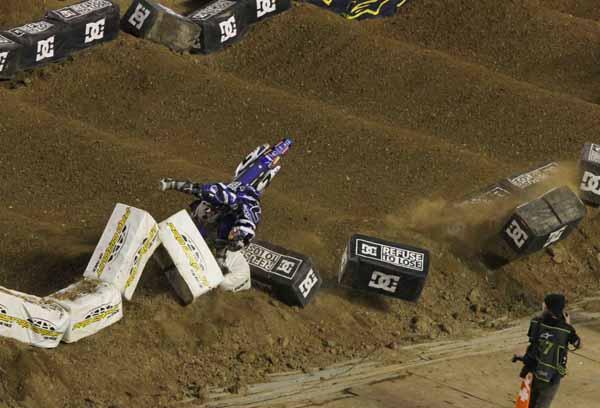 So what’s up with James? Here is how I see it. I am one that really liked James in the whoops about a year and a half or two years ago. But then he was doing things a little different. James used to be on the balls of his feet as much as anyone and now he is in his arches. From the arches, there is no way you can finesse the bike through those whoops that way, and his timing looks off. Also James has no back up plan because his finger is not on the clutch ready to control the power if he needs to. Without a finger on the clutch you can only hope for the best and hope that the power is there when you need it. Ask yourself, why does James crash more than the other top riders? Could it be because he is also the only top guy that thinks you never need the clutch? 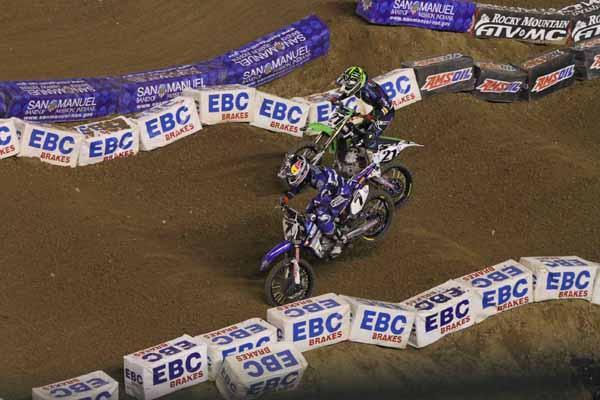 If your front wheel goes into the bottom of a whoop this is what you get next. 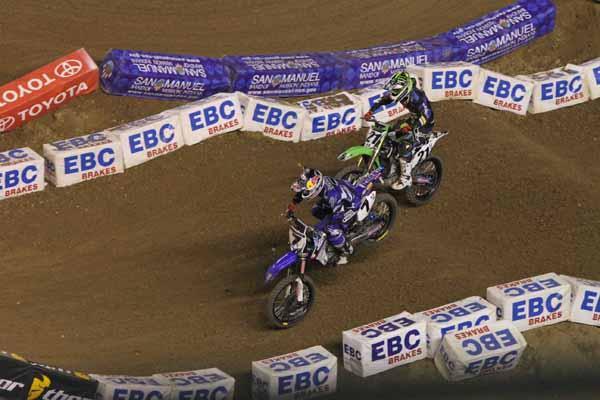 This is what you get when you commit and things don’t work out—the rear kicks up and the front wheel gets turned. Not good. 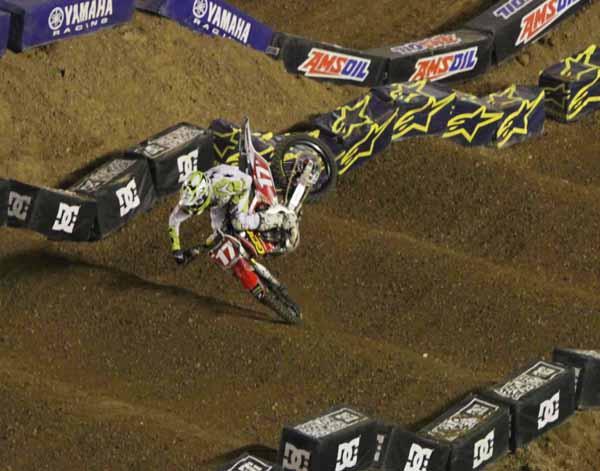 After the crash James took a safer way through the whoops. Before the crash he was skimming the whoops, while after the crash he opted to triple, triple, which is the easier way. If you look closely you can see that James is in his arches and not ready with the clutch which is standard for him. Yes you can make the whoops work this way, but why would you?  Remember if you want to go fast, the shortest distance between two points is a straight line, and the smoother you can be, the better, because you will not loose your momentum and get on top. 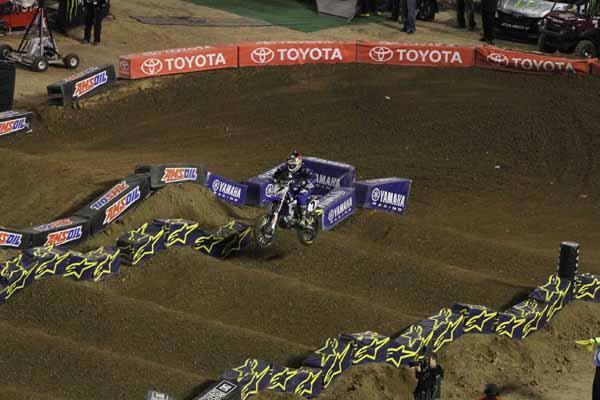 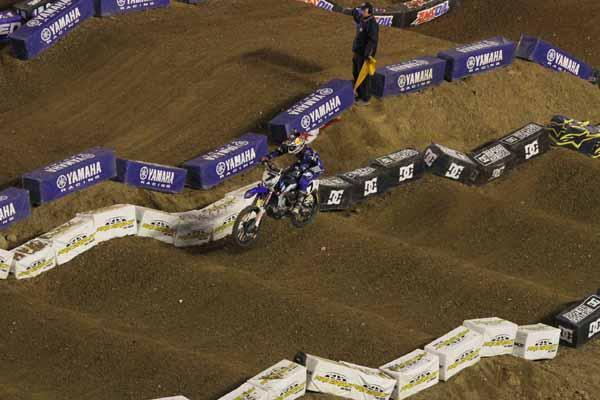 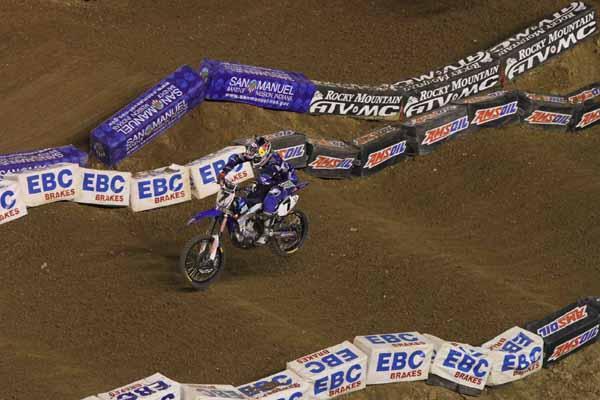 After RV led for so long in the main, CR closes in and makes the setup for the kill. I like the way this setup is done as Chad squares up the turn and drives on the inside. This one takes commitment as well because of how close Chad’s front wheel comes to Ryan’s rear wheel. 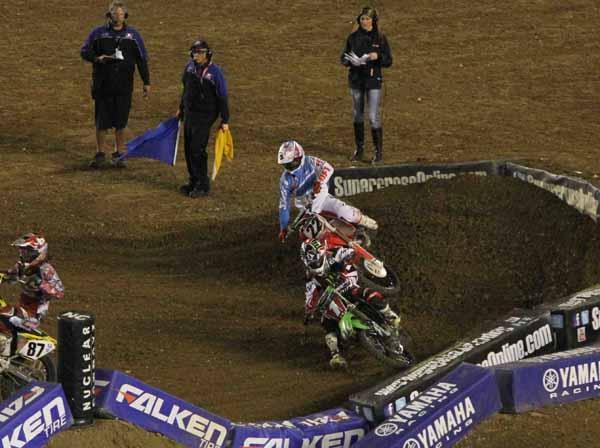 Don’t wait! In the very next turn Ryan comes right back. While Chad goes a little wide opening the door, Ryan drops under. One lesson here is never go wide after you have just passed someone. And the other lesson is, if you get passed, come back quick and don’t let the rider that passed you get away. You can get frustrated later, you don’t have time now, you must stay focused and come back quick. 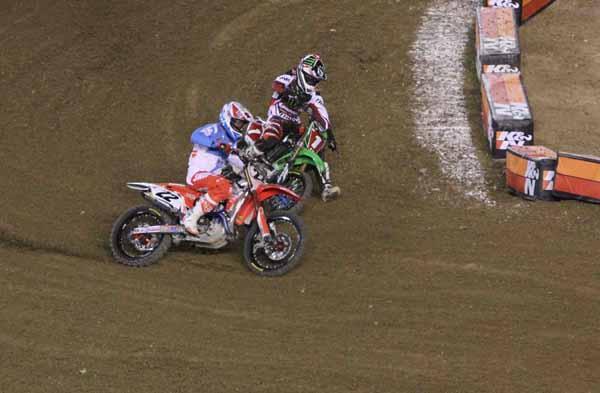 In the very next turn Ryan comes at Chad again on the inside. But, this time Chad doesn’t give it up. And that’s the way it’s done, close clean racing and respect. 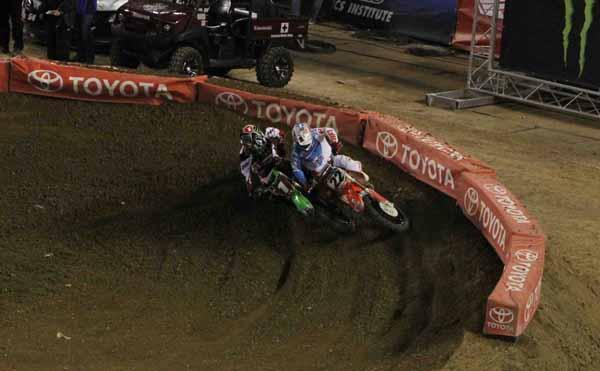 Here is what is for sure if you leave the door open too many times, someone is going to come in. This time the pass is made. Another lesson here, in practice  work every line on the track so you can go where you need to in the race. And don’t leave the inside open. 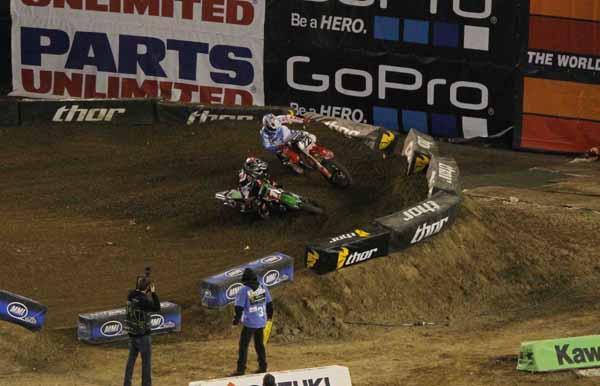 Here is one more thing that is for sure. In life, for anything you don’t like, nothing will change if you don’t make a change.

Just a bit of advice. If you want to be a good supercross rider you need to practice whoops. I see so many riders in practice during the week going around them and then when it comes to the race, those same guys can’t do them.

Hope you enjoyed this week’s Breakdown and that it helps you in your racing. To check out more of my work be sure and head on over to Racer X Virtual Trainer and check out my feature Trackside.