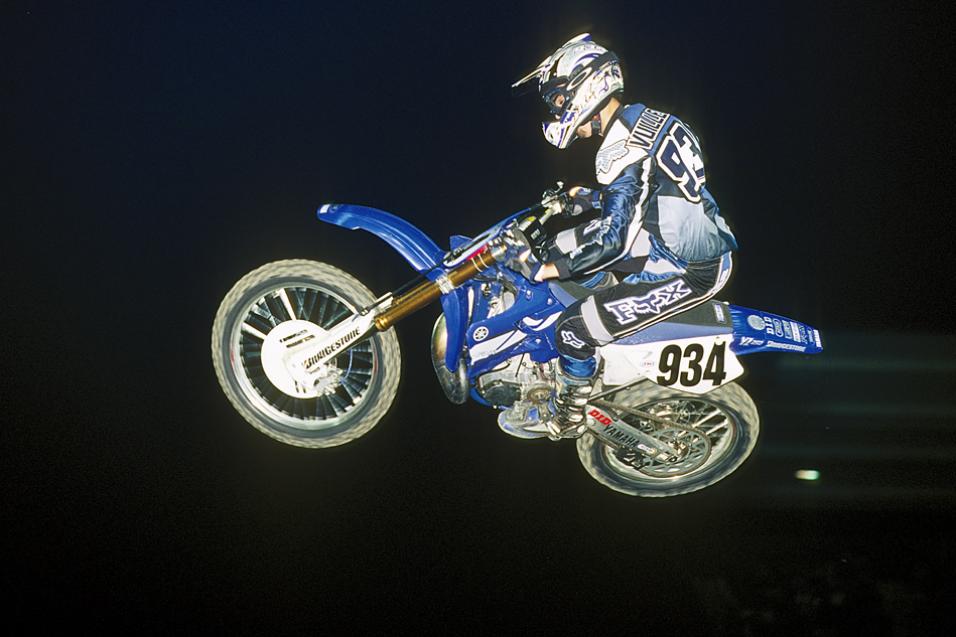 This Week in Yamaha History: DV in PHX

January 12, 2012 10:00am
by: Jason Weigandt
Chase Field Phoenix, AZ Phoenix Monster Energy AMA Supercross Championship
This weekend, the Monster Energy Supercross tour rolls into Phoenix, and that’s where we find ourselves in This Week in Yamaha Supercross History.

The year was 2000, but the new millennium was just like the old one. Jeremy McGrath was dominating supercross early in the year. He won the first two rounds, but a crash at round three left him coming from behind, and opened the door for Frenchman David Vuillemin, in his first full season in the U.S., to take his first career race win. For round four in Phoenix, MC needed to reestablish himself, and he did by jetting out to his customary early lead. But someone forgot to tell Vuillemin that this one was over. He kept charging until he caught the champ with a few laps to go. We’ll let DV take it from here.

“It was cool to race against him in Phoenix,” says Vuillemin. “I had won San Diego the week before, my first win, but Jeremy had gone down. In Phoenix, I came back through the pack. I did not get a great start. The track was technical, it was rutted, and it had some slick sections that I was good at. I had some good lines, and I felt great. I passed him with a little over a lap to go.”

Vuillemin shocked the world by catching and passing McGrath late, and then holding on for the win. “That was the fourth race of the season,” explains Vuillemin, who today works with Kyle Chisholm. “I didn’t know what to expect, but I got fifth in the first one, second in the second one, and I won San Diego. So I was living the dream, and I was fast! It was definitely one of the best races I’ve ever had, for sure.”

The win was not without some drama, just like any big battle early in this season will provide. After the race, McGrath’s camp said they did not realize Vuillemin was coming, and they didn’t put the lap times on the pitboard until it was too late—McGrath was caught by surprise. This caused some controversy back then, but Vuillemin shrugs it off now. “Yeah, after the race what happened happened, he didn’t know I was there or whatever. For me, that was not a big deal, it was okay.”

[Check out the full race below.]

Vuillemin had a great season, notching two more wins that year and finishing second in the series behind McGrath. Although he grew up in France and raced the GPs, winning AMA Supercross races had always been his goal.

“I finished third in the 1999 250 GPs, which was good, and if I had maybe stayed in the 125 GPs, I could have maybe won a title there,” he says. “But the thing is I never wanted to be World Champion. If it happened, great, but that wasn’t a big deal for me. My dream was to come to America and race supercross.  I wouldn’t trade any of my seven career AMA 250 Supercross wins for a World Title.”

And of all seven, none may be more impressive than that night in Phoenix.