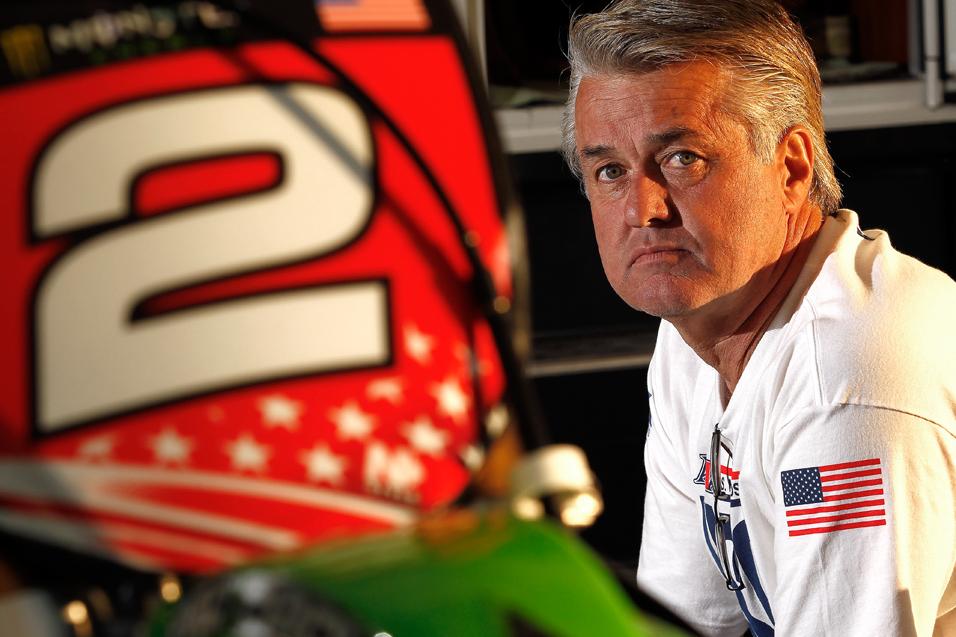 Monster Energy/Pro Circuit Kawasaki’s Mitch Payton is a key part of Team USA’s Motocross of Nations effort every year. He brought three of his four racers over to compete in the race this year as well, but only one of them for Team USA. Blake Baggett rode MX2 for Team USA, Dean Wilson raced MX2 for Great Britain and Tyla Rattray raced a 450 for South Africa. Monster Energy's Eric Johnson talked to Mitch after the race.

Racer X Online: Coming into the race what advice did you have for Blake Baggett, since he hadn’t been here before?
Mitch Payton: Originally we just told him probably to take a lot of people out and try to attack people... [Laughs] No, I’m just kidding. Honestly, it was really just, “Keep your head together and ride your best motos and just stay to yourself and try to get the best start you can.” The first moto, he went down in the first turn. [Antonio] Cairoli fell down in the first turn and then Dean [Wilson] piled on him and then Blake [Baggett] hit him. So, they all fell down together. That was bad. And then he fell later. The second moto, he was actually up there, I think top ten, and then he went off the track and got stuck under a fence. And he fought to get out of the fence and it was halfway through the moto so there’s not much time to catch back up. But he rode a good moto. It’s always that way. Even though it seems like he didn’t do that well, it’s like, that could have happened to any of the other two, also. So, it came down to the last moto and looked like we were pretty far behind but when you drop a moto we were three points behind, and if Ryan [Villopoto] and Ryan [Dungey] went 1-2, we would win by a point no matter what. And those guys just killed it. They crushed it. Villopoto laid the wood to it and Dungey was awesome. And even Ryan [Villopoto] fell down one time. They stepped up. They got great starts and they rode a phenomenal race.

How inspiring is that to see them do that, when it’s all on the line?
Yeah... I think, even after the second moto, I listened to the interview with Ryan [Villopoto] and he wasn’t feeling super-pumped. He’s like, “Yeah, it’s going to take us a gift to win this thing.” I was really happy. We told him, you’re only three points behind. When they calculated both [of Baggett’s finishes], it looked like we were farther behind. So I’m like, if you guys go out there and kill it... And Roger did it, too. We were talking about it. I was pumped on both guys. I think it was really cool that they went for it. I thought it was really respectful of Villopoto to wait up for Dungey at the end, too. We had kind of joked about it, like, how cool it would be if he’d slow down and they’d cross the finish line together. And all of a sudden we knew. He had the gap and Dungey had the gap to do it and he was waiting for him. That was a respectful thing for Villopoto to do and Dungey was pumped on it, too. They won as a team. They did it. They fought all year long and right now they’re like the best buddies.

And next January they’ll be kind of enemies again...
No, they’re not enemies, but they’ll be rivals. That’s fine. There’s nothing wrong with that. But it’s like what they did today was phenomenal because they did it for our country.