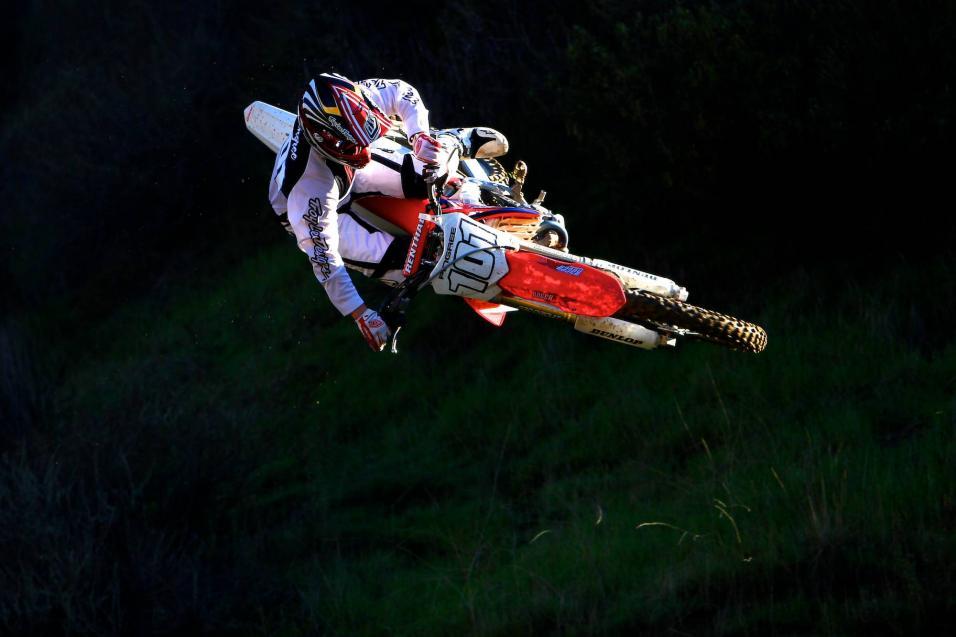 Dear Ping,
While admiring my son's two first-place trophies (250C and 450C) I had an epiphany. That goon riding, fist thrusting dude on the top of the trophies looks exactly like the guy on my trophies back in the 1980s and ‘90s. Who is the inspiration for the model? Is he a legendary hero of our sport? Back in the day he rode a twin shocker but now has a more modern water-cooled, single-shock bike but yet still has the same squid-like style. If you don't know the info maybe Johnny O’Hannah might.

After doing some research [Thank you, Google] I found that the original figure was actually modeled from a Portuguese rider named Kevan Andrade. He was a racing legend in the Lisbon area during the 1970s and his father owned a trophy shop called La Primera. The trophies and plaques that were produced were used all throughout Europe and eventually imported to the U.S. and other global areas as the popularity of the sport grew. The Andrade figure was updated to look more modern sometime in the late 1980s or early 1990s, though there is no information available about who made those changes. I contacted Johnny O’Hannah to see if he knew anything about the updated version and his comment was, “What the hell are you talking about, Ping?”

At that point I realized that getting a real quote from someone for my entirely fictional story was a bad idea. I had you going though, right?

I don’t have a clue who the rider is on MX trophies, but they seem to be about fifteen years behind the times. So, in 2020 the local rippers at Anytown Dirt Bike Track, USA, will be getting trophies with James Stewart scrubbing on top of them. Sadly, he will still be on a two-stroke.

Doctor Ping,
I'm getting my mind right from reading your perspectives. Did you see the Women's Enduro X from the X Games? That's all I saw so I wasn't already de-sensitized by seeing a lot of other wild stuff first. I was belly laughing so hard I burned 800 calories and had the neighbors broom slamming the wall. Those young women are tough! From the first pile up at the bottom of the cliff start, to the upside down slide one of them took off the side of a 20 foot obstacle, those ladies just kept getting back on saying 'Sir may I have another?' I don't care if some of them were crying at the end, they gave it everything. It was inspiring. Do you think this is the beginning of a big thing in motorsports? Will it get as big as supercross? A few adult beverages and some imagination could result in really awesome track obstacles.

Fat Man On a Little Bike

There really isn’t anything that could have prepared you for the spectacle that was Women’s Enduro X. From the crash in the first turn to the splash-down in the water hole as the winner crossed the finish line, this event was only entertaining because of it’s unintentional comedic value. And did I catch Cameron Steele saying something about Elizabeth Bash contacting some lumber? That’s good stuff. Add to that crash-fest the fact that the two best female motorcycle racers in the sport were KO’d during the Super X event and I think the ESPN folks might want to rethink their plan for X Games 18. Watch it one more time, just for fun.

I don't actually read your article because it's not that interesting, but one night as I was falling asleep on the couch after having some beer, pizza, and Chips Ahoy cookies, I must have accidentally clicked on the Ask Ping link. I was really trying to go to the Fan of the Week section to look at all the hotties, some of which are no doubt of questionable age. At any rate, I was wondering why Ryan Dungey has not been a Fan of the Week? He's just as pretty as any of those fans in my opinion.

You know what… you’re right: This column isn’t that interesting. I doubt you are even reading this, but from now on I’ll try to make you the subject of Ask Ping every week to draw readers in and keep them riveted to their computers. After all, what could be more enthralling than hearing about your life as you gluttonously eat and drink your way to obesity on your couch? Why hasn’t Ryan Seacrest or someone at E! Television contacted you already about a reality series? I’ll get to work on it immediately, lard ass.

Regarding your homoerotic question about Ryan Dungey, I don’t know why he hasn’t made the cut. Maybe if he submitted a photo of himself in a banana hammock or a tight pair of jean shorts, ala Shawn White, he would get the attention he deserves.