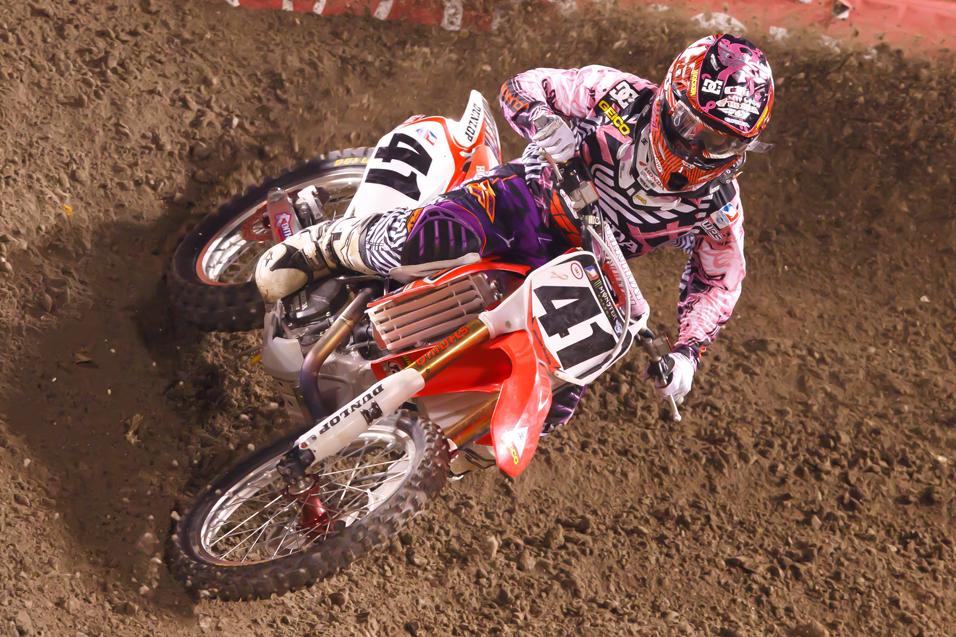 American Honda Racing’s Trey Canard is back! He’s returning from a broken femur this weekend at Spring Creek, so we asked him about his expectations, his recovery, his preparation….you know what? You’ll know what we asked him when you ready the questions. Then read his answers. It’s very simple.

Oh man what is taking so long? What about Millville? Could you make it back for Millville this weekend?
Well, I don’t know. I may show up as a rider. I’m gonna’ go there and ride around. Maybe they will count me as a rider. I don’t know.

So everyone is all “Last time we saw Trey Canard he was winning Supercrosses! He can win this weekend!” Is that realistic?
Right now you have three guys in a really good championship battle. To go and mix it up with those guys right now is probably not realistic. They have that extra edge and intensity. And coming in halfway through, everyone else has a routine down and has the flow of the whole weekend. So my expectations is to just try to maybe be top five. I’d be pretty happy with that, and then we can go from there. I just want to have a solid practice, get good starts, finish the motos. 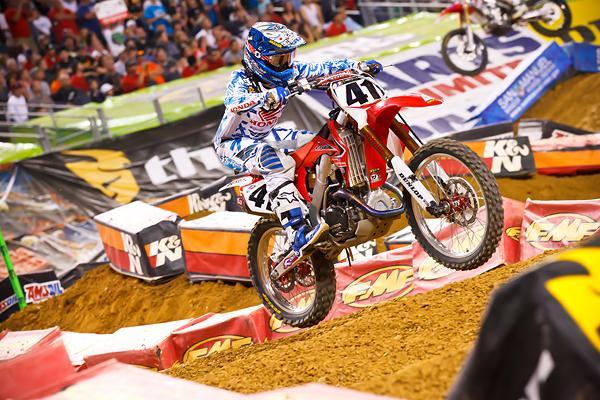 So is this all a matter of racing pushing everyone to go faster, and you just haven’t been racing? Or are you still not quite all the way back to 100 on speed and fitness.
I’m only 50 percent.

Wow!
No just kidding. My leg is definitely 100 percent, it feels good. I’ve been riding for three weeks now, and I’ve been cleared by several doctors. I feel really good about where my fitness is at and where my bike is at. I’m excited to race. I’m as ready as I can be, the next step for me to develop is to go racing, that’s all that will help me improve from here on out. When your competitors have raced eight races and you haven’t, you lose some of that, um, comfortability, if I can make up a word.

Nice. Good word. When you first got hurt we heard it wasn’t a bad break, and you’d be back quick. Was that not true, or did you have setbacks?
I think we all thought it would be good because I didn’t have to have surgery. It’s obviously faster than a regular femur fracture, but I think we all forgot it’s still a femur and it still takes long to heal. Yeah, at first everyone was excited, thinking, “Oh he’ll be back for outdoors” but it just takes a long time for a femur to heal.

What’s the process of coming back? Swimming? Bicycling?
The biggest thing is to not lose sight of where you were. The hardest thing is, I don’t know, you lose some self worth. You forget who you are when you’re not racing. And there’s a good reason for that, people forget about you when you’re hurt. Like the media, it’s as if you just dissapear. It’s kind of hard to take at times, and I understand it, it’s just circumstances, but that’s the toughest thing about coming back. Still believing in yourself and finding value in yourself without getting a constant “atta boy” at the track every weekend.

From there it’s just trying to maintain any fitness you can. I had the arm bike for awhile, then as soon as I could swim that was a huge part of the training for me. And upper body work. I was actually able to cycle before I could walk, because it doesn’t put much pressure on the femur. Finally you get to the riding, and that’s the fun part. You can’t quite ride the way you want right away, but at the same time, you do all of that other training so you won’t have too much of a hole to dig out of once you do get back on the bike. 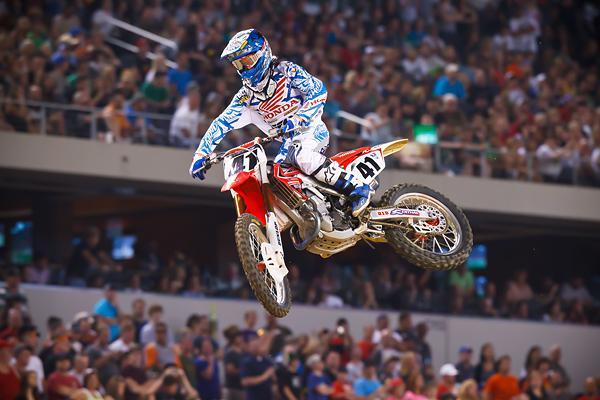 Can Canard step into the three-way battle Reed and the Ryan's have going, right away?
Photo: Simon Cudby

Finally, we’ve heard Tim Ferry has moved on to a testing gig with James Stewart’s team. Was this just a matter of two red heads just not being able to get along with their fiery tempers?
Well, here’s the thing. Tim Ferry told me I sucked, and I told him he sucked, so then it escalated into this big fist fight. He walked out and I told him he’s not as tough as he thought he was. I also asked him what his problem was. That was it.

(Laughs) That’s pretty good stuff. I hear he actually introduced you to your current trainer?
Yeah really it’s been an awesome process. I don’t think he ever really wanted to be a trainer and I respect that. He felt he could help me and I think last year he was one of the biggest reasons why I did turn things around at the middle of the season. But I still don’t think he ever wanted to be a trainer, he wanted to be a test rider, that’s where his passion was. He had a couple of opportunities come up, and I’m pumped for him. He gets to spend more time with his family and doesn’t have to go to the races every weekend, he gets to be down there in Florida doing this deal.

What was cool about the whole deal is we used the same training philosophy as someone he trained with, Dean Golich of Carmichael Training Systems. So now I’m working with Dean, and it’s a lot of the same stuff I was doing already. It’s hard to find something you really believe in, and when you do you need to stick with it. I’m really happy working with Dean and I think we’ve made big improvements. I’m happy to still have Timmy as a friend, and someone I can go to if I need it.