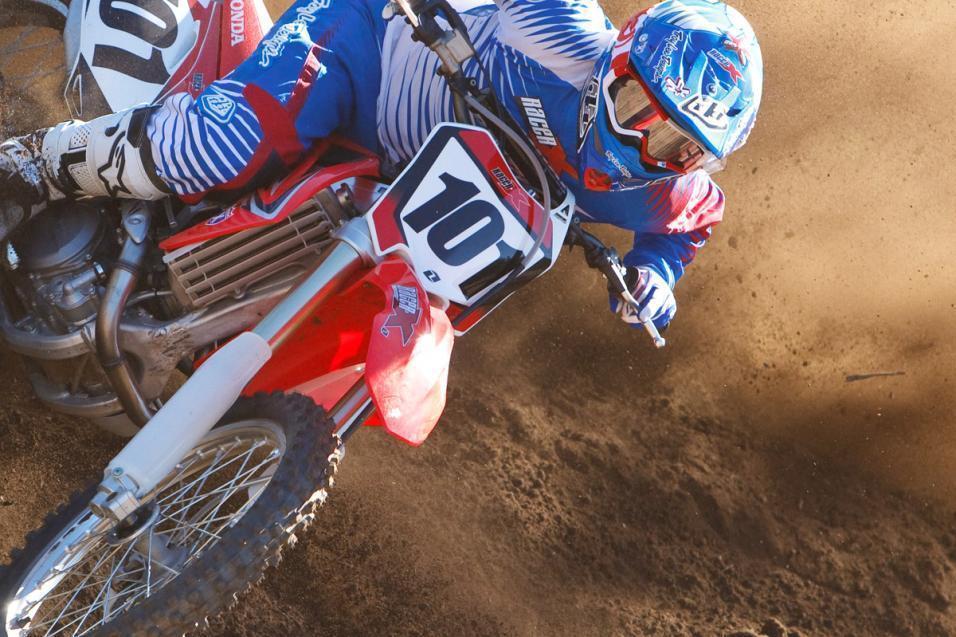 1st I just want to say I've been reading your column for as long as I can remember and they just keep getting funnier. So I will quit rambling and get to my question.  I always wonder how people would do crossing over into other things.  So in your honest opinion which (active) motocross riders would be the best country music singer, MMA fighter, politician, stay at home dad, or actor.  Oh and how do we do away with not only the tucking of the ears inside the hat but also the flat bill hat in general?

Ryan Sipes would be the best country music singer. I haven’t stalked him in his shower to see if he can actually carry a tune but he has the drawl and the Kentucky twang to lay down vocals on the next hit song out of Nashville. Chris Blose could have a second career as a MMA fighter. Again, never seen him throw a punch but he is yoked out enough that he could choke himself out trying to scratch an itch on top of his head. Think Lou Ferrigno as The Hulk but with tats and earrings instead of green skin. Travis Pastrana for president [seriously, I’d vote for him]. Kevin Windham is your stay-at-home dad in a couple more years, literally. And Nick Wey can and should be cast as Rabbit in the sequel of the straight-to-DVD film 8 Mile.

The hats will go away, eventually. Just point and laugh every time you see someone wearing their hat like that… it will speed the process.

Recently my dad, who is in his late 40's, sent me a story of motocross folklore about "Mad" Mike Jones. Swain MX invited Mike to upstate NY last weekend and it started to rain bad for the second motos. They combined the Vet A class, Schoolboy, and Senior B for a stagger start and my dad was riding Senior B. He stalls the bike while leading, ends up last, and then is in the way of the Vet riders - mainly Mike Jones who was battling for the lead. Mike is in my dad's roost for a lap trying to find a way around in the mud because I guess my dad didn't know he was being lapped. Finally he gets around basically running him off the track. Afterwards my dad went and apologized for getting in the way and Mike was cool about it. Pretty cool story from my dad who has raced forever. The point being that it's cool to see the "old" timers return to racing at local events or even qualify and compete in the nationals. I know some want to see Mike Brown lose that coveted #3, but I think it's awesome to see him keep it. I'm looking forward to hopefully seeing John Dowd at Southwick. And who can forget, K-Dub flyingfor 4th places every week. But Ping, who else do you know of out there besides yourself, Ryno getting beat up by Lapaglia, McGrath, and a few others that are still showing up and ripping it with the young guys?

PS Love your answers each week!

There are still a few guys that show up and race fun events like Mammoth, Day in the Dirt and a few other events throughout the year. RJ, Dogger, Mike Bell, Doug Dubach, Micky Dymond, Greg Albertyn and Phil Lawrence all ride regularly and can still run a good pace. But there are a lot of former pros that prefer not to ride at all if they can’t ride at the level that they once used to. Johnny O’ and Broc Glover are two guys that come to mind. Some guys just burned out on riding and they would rather golf or ride a bicycle if they have free time. If you really want a guy to cheer for this weekend at Millville look for Chad Pederson racing the 450 class. “Swap” is having some kind of mid-life crisis and qualifying for a national is his way of coping. He can still throw down a fast lap so it won’t surprise me at all to see him make the motos. Getting through two 35-minute motos without his hands falling off… that’s another story. Old guys rule. Go Swappy!

Just wondering, why don’t you race anymore? I mean Windham and Reed and Stewart are out there and you definitely got the speed. I think you could give those guys a real run for their money and be a title contender in Supercross and Motocross series. I know you had the bike break on you in 2002 but I really think you should get back into it.

Cheers from the UK

Terrific idea, man. Hey, why don’t I call Mike Ditka and see if I can get him back on the line of scrimmage for the Chicago Bears next year? And maybe Larry Bird can break out his old Chuck’s, grow a silly little white mustache and dunk on Shaq in the NBA finals in 2012. I’ll get Richard Petty to pull out his powder blue STP POS and kick ass in NASCAR again and if Darryl Strawberry can stop doing blow out of hooker’s belly buttons for a minute he can come hit a few homers in the world series too.

Those ships have sailed, big time. See you at the vet nationals.