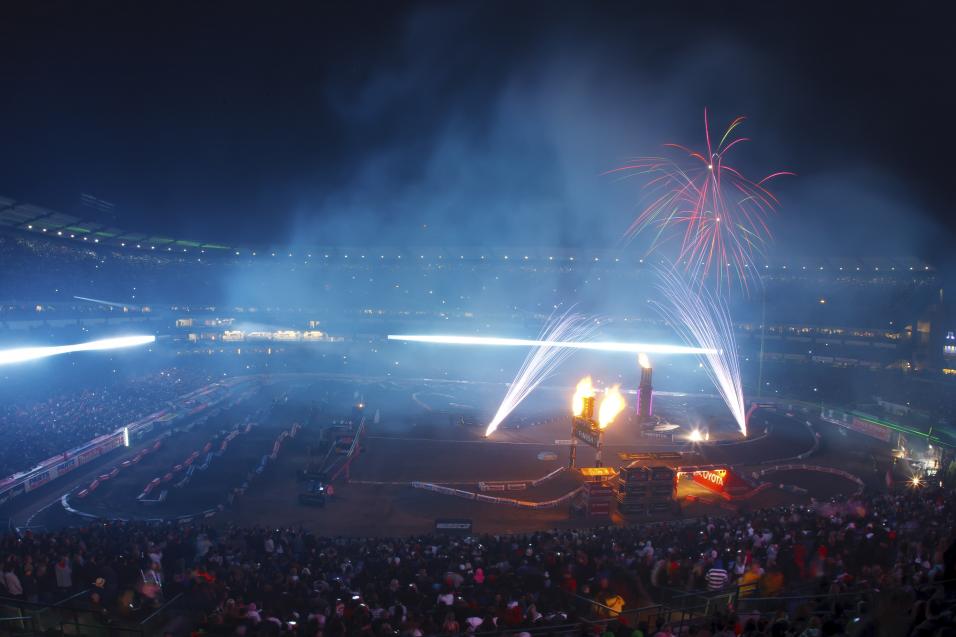 I have two questions for you, oh omnipotent, columnist one....

Thanks, and tell Davey I'll be looking for him at Indy.

The big question that every rider hopes he never has to answer: Do I jump off or ride it out? There comes a time in the crashing process when a decision is made. You do your best to make a quick, rough calculation in your head regarding the trajectory of the bike, your speed, where and how you are going to land. At that point you have to decide, borrowing a hook from The Clash here… Should I stay or should I go now? In fact, we could even apply the next line: “If I go there will be trouble. If I stay it could be double.”

Okay, moving on. Sometimes, it’s best to stay on. If Doug Henry had jumped off during his infamous leap at Budds Creek he might have been much worse off. The suspension is the only cushion you have between your brittle bones and the dirt. But if Ryan Villopoto had attempted to stay on his bike at St. Louis last year, I believe he would have been worse off. A broken leg is better than a broken neck. The short answer, Michael, is that while the general rule is to hang on to the bike, there are times when it’s best to sever ties and fly like an eagle… Like a beautiful helmet-wearing eagle frantically trying to roll both windows up simultaneously on his imaginary car… and let your ankles take the beating.

Question 2: No idea what happened with Miss Supercross. Maybe she got tired of wearing leather pants, high heels and a bra while being ogled by thousands of pervy supercross fans in frigid weather and having to smile in perpetuity for five months. Just a guess. I’ll tell DC to look for you. Hey, DC, look for this guy at Indy. There you go.

I'm a fan of yours and have been closely following you since you lost to Shae Bentley back in the day. My problem is: I had a favorite rider for years (let's call him Fim Terry) and he recently retired from the sport that he so dominated for years. He was one of a kind and they just don't make them like him anymore. From 125 SX championships (beating Ricky Carmichael by the way) to Summercross titles (beating Jeremy McGrath by the way) to representing America three times at the Motocross des Nations, he's a true American hero. Like Lee Majors, only better.

My question to you is how do I find a new "guy"? Any suggestions? I heard you on a really cool podcast show talk about Trey Canard...should I cheer for him? I need a new rider in my life because I just don't know if I have any more tears left to shed for Fim Terry. Any help you can give me to get over my heroes retirement and get back to my normal life would be appreciated.

It doesn’t sound like you have a normal life, but I’ll help you get back to the bizarre existence you call reality. First of all, Lee Majors was fantastic as Colt Seavers in one of my favorite childhood television shows, The Fall Guy. I loved him. But I don’t go for all that high-tech mumbo jumbo so the Six Million Dollar Man stuff wasn’t for me. As awesome as he was, you might be stretching it to call him an American Hero. The next point I would like to make crystal clear is that Trey Canard is my guy. Don’t try to creep in and be Trey’s turkey sandwich artist because I’ve already sent in my application for that position. I’m waiting to hear back from his HR gal (mom), but with my qualifications I think I’m looking pretty good.

Now, if you really need a guy I’d like to throw some options out there for you. How about Lil Hanny? We’ve both taken shots at him in the past, and rightfully so, but he was awesome last Saturday night and someplace way down deep inside me, in a squishy little spot near my pancreas, I think he’s finally turned things around for himself.

If you don’t like the cut of Josh’s jib then how about Nick “Snookie” Paluzzi? He has an awesome nickname. Or what about Justin “Realtree” Brayton? He’s practically invisible but he’s almost finishing on the podium! What he really needs is someone to run around and make some noise so people notice him. My last suggestion is Chris Blose. He lives right there in Vegas most of the year, you already write his press releases and he could show you how to turn your jiggly arms into perfectly sculpted guns. Well, less jiggly arms anyway. Good luck with your search.

Why is it that some riders such as Ken Roczen carry a lot of hype by the media before they are even proven on the track? I have no doubt in my mind that Roczen is an incredible rider, but he is 16, only raced outdoors in Europe (to my knowledge... if I'm wrong I'll join the assface who accused you of never racing from two weeks ago), and he has yet to really show what he is worth on the supercross track (and not just from practice times). Then you have Cairoli who is a highly successful GP veteran, and KTM picks a 16-year-old over him to race in the States despite how much Cairoli has wanted it and earned it over Roczen.

To the converse, anyone (basically everyone) who was betting on Villopoto to win the '08 East SX Lites title or Stroupe for the following year got their asses handed to them when the unexpected Canard and Pourcel won the championships respectively. I know it’s an unpredictable sport, but shouldn't the media wait just a tad longer before hyping up a rider?

The kid is 16-years-old and winning GPs in Europe. He also came to the MXoN and beat the very best riders we had. And he did it convincingly. So it really shouldn’t come as a surprise that he generated some media buzz prior to the season. What we should have done was send out a memo to flaggers, track personnel and his competitors to keep their eyes peeled for a flying orange bike at the first few rounds. He was definitely having a tough time controlling that speed at the start of the series.

Sometimes we have a tendency to overdo it on up-and-coming kids. There are companies running full-page ads with Adam Cianciarulo already that compare him to Jeremy McGrath. I think it says something to the effect that Adam is seventy-two wins away from being the all-time supercross win leader. Hey, I like that kid, even though I’m still not sure how to properly pronounce his last name, but why do we have to put all this pressure and expectation on him already? Waaaay too much media hype for such a young kid, in my opinion. If we are going that route, why don’t we already start talking about potential children? Did you know that Grant Langston’s little sister is engaged to Ryan Dungey’s brother? Do you have any idea the type of superhuman moto-specific genetic material that kid is getting? The only way you could get a more impressive DNA strand for motocross is if Bob Hannah knocked up Roger DeCoster’s sister. And I’m not even sure he has a sister. You heard it here first, folks: There’s another Dungey that is going to completely dominate the sport of motocross is twenty years. Potentially.

Got a question for Ping? E-mail him at ping@racerxonline.com. Help pay for his children’s college tuition by visiting www.motocross101.com.