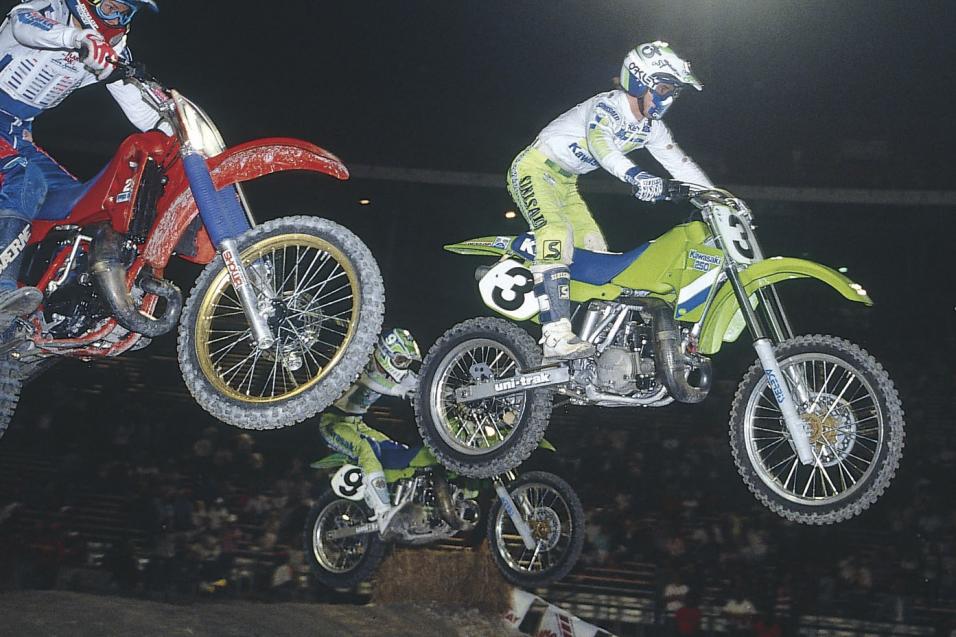 This week the racers are heading on over to Anaheim Stadium for the fifth round of the AMA series and their second visit to the Big A in Anaheim. So let’s get talking about the opening round of the 1987 Supercross series—which also took place in Anaheim..

Tensions were high and the holeshot was grabbed by Kawasaki’s Jeff Ward but defending champion Rick Johnson struck fast and made a move. Shortly after that, Ward slammed his way by RJ and the dogfight between the top two stars of the day was on. 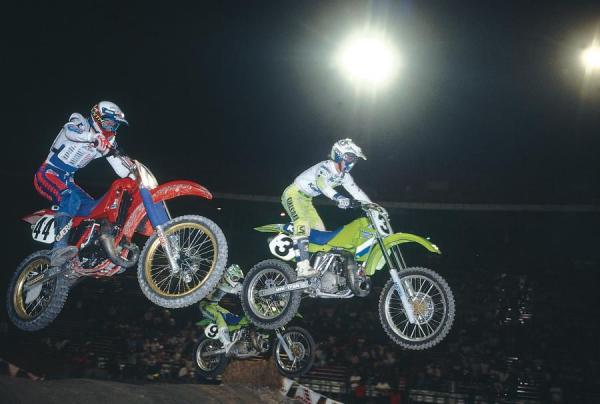 Ward on his way to victory at round one in Anaheim.
Photo: Moto Verte

Two laps in and Johnson, trying to catch the very fast Ward, crashed and knocked himself out over a set of triples. The race was red flagged. It was a shock to everyone to see  Johnson sprawled out on the Anaheim track . Remember, fellow Honda superstar David Bailey had his career end in a crash just a few weeks earlier, and Johnson laying motionless on the track shook everyone up.

RJ would eventually get up under his own power, but his night was over.

Ward, Kawasaki’s stalwart rider for years and at this point a three-time  AMA National Champion, was happy to get his year off on the right foot.  One year ago, Ward came to the first race at Anaheim ready to defend his 1985 SX Title, but disaster struck when his throttle cable broke in his heat and denied him a transfer to the semi final. That meant no main event for the Flying Freckle.

Can you imagine if the 2011 defending champion Ryan Dungey didn’t make the main event at A1?

Anyways, Ward’s ’86 season was not one to write home about but in 1987, it was all going to be different. When the gate dropped a second time, Ward roared to the front again with his second holeshot in as many gate drops! From there, the rider wearing number the big number 3 would go all the way unchallenged to the checkered flag. It was quite a statement ride by the man on green. 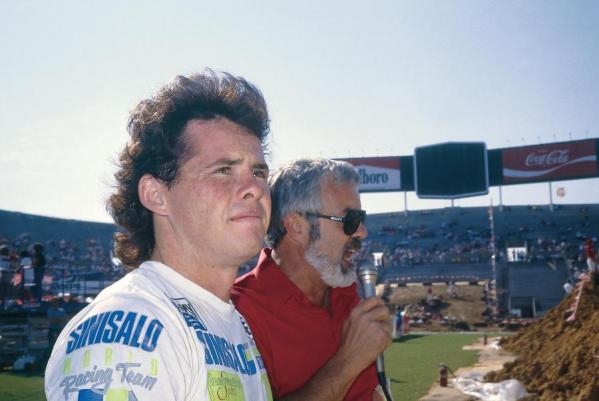 Ward carried the momentum of his win at Anaheim all the way to the 1987 championship.
Photo: Moto Verte

“It was a big win for me and I remember there was a big jump that only a couple of us were doing,” Ward told me the other day. “I did it for the first two or three laps and then built up my lead and stopped jumping it. It was big!”

Just to top it all off, Ward’s teammate Ron Lechien brought it home in second to make it Kawasaki 1-2 at the opening round. Lechien’s bike was missing a side panel and a rear fender from a crash in the first main and with no time for the restart, Ronnie rode the banged up KX250 that way the entire main. To make it even better, Kawasaki support rider Jeff Matiasevich took his Kawasaki KX125 to a first place in the 125 support class.

All in all, it was the right way to start a season off for Ward and he would indeed go on to claim the 1987 Supercross championship.