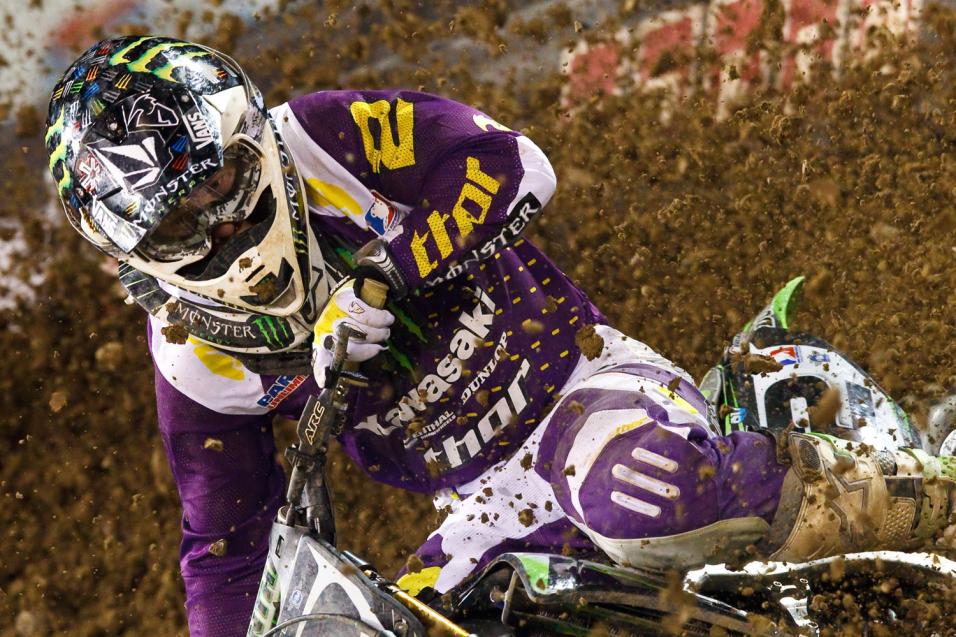 There are questions about all of the contenders for the 2011 450 Supercross Championship, for example-how will Chad Reed adapt to the Honda and running his own team? Will James Stewart’s wrist hold up? What about his bike set-up, and is he going to be rusty after only three races in 14 months? Can Ryan Dungey repeat and build on his incredible 2010 season? What will the departure of manager Roger DeCoster and Suzuki motor guy Ian Harrison do to Dungey’s psyche and machine?

Unlike some of his competitors, not much has much changed for Ryan Villopoto. Same basic bike, same team manager, same mechanic, personal sponsors, etc, etc. but along with all that normality is the same question that we’ve been asking Ryan for two years. Can you stay healthy? 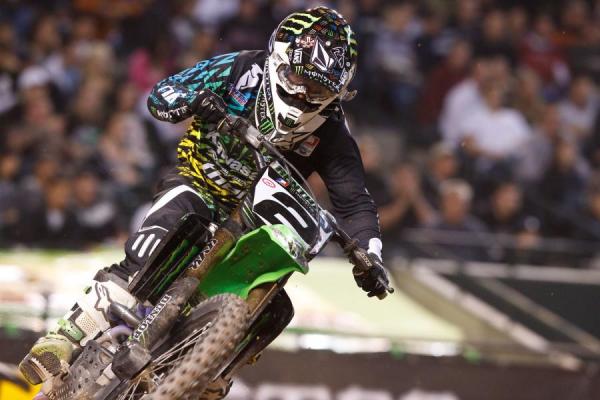 The three-time AMA Motocross Lites Champion from Washington State blasted upon the scene winning pretty much everything you can name as a smaller bore rider, and he’s certainly shown us some greatness in his limited rides on the 450 (Glen Helen MX win in ’09, seven supercross wins last year) but he just can’t shake the injury bugaboo. First up it was his getting sick in his first year of 450 SX, then the knee after that Glen Helen win the same year, then last year it was a horrific crash at the St Louis SX which resulted in a broken leg, knee and spirit.  I spoke to Ryan the other day for a little while and I asked him the question that’s on everyone’s mind.

“Yes, I understand the question. There’s nothing I can do to fix it or re-do it (the crash) so I don’t worry about it. I just move on and keep working. It’s definitely frustrating. Kawasaki hired me to do a job and I haven’t fulfilled my end of the bargain.  We’ve won some races, sure, but the next step is the championship,” Ryan said with a hint of frustration in his voice.

“As far as race wins, if I win again it will just be a race win. I have a bunch of those. Don’t get me wrong, those are great but I have to step up and win a 450 championship and by hiring Aldon, that’s the direction towards winning one that I thought I had to go,” adds the man known as RV.

Ah yes, the Aldon in question is trainer Aldon Baker who made his name working with Ricky Carmichael and most recently, James Stewart. Baker is the big addition to Villopoto’s program (Says with what has to be a smile, “I know that Dungey wanted him bad so that made it all the better for me to get him”) and if you’ve seen any pre-season videos then you know that the money laid out for Baker has been well spent.

Villopoto is at a trim weight right now, lean and ready to race. He’s been bicycling a ton and adhering to a program that Baker set up for him. It’s a program that has been proven before (for examples of Baker’s program see; Carmichael, Ricky and then count the titles). If there was one problem for Ryan last season, it was in recovering from his knee surgery and not being at the, uhh, ideal weight to start the 2009 SX season. Those problems are over now.

There are a few people who find Villopoto a little quiet and a little bland in interviews but I think it’s the opposite. Maybe it’s because I’ve spent enough time at the Kawasaki truck over the years to get my own locker (making sure Tim Ferry was doing ok) but I find RV to be refreshingly open and isn’t beyond a little trash talking of his fellow riders. He usually follows everything up with that little cackle of his to make sure people know he’s half-joking. 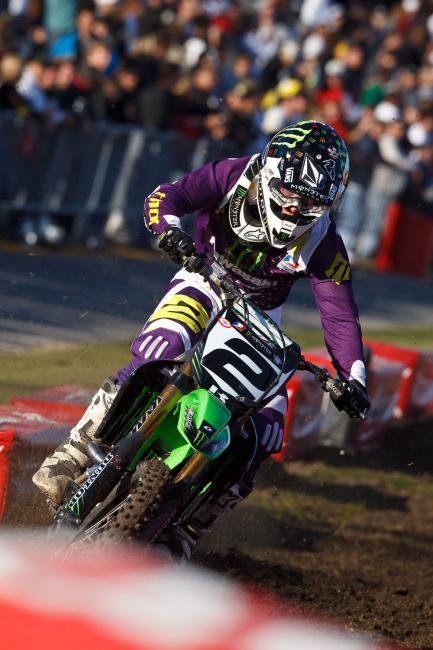 Villopoto and Weimer will be running FMF exhaust in 2011.
Photo: Simon Cudby

From asking about the switch to FMF exhausts (“They’re impressive”) to how his teammate Jake Weimer is doing coping with his broken arm (“He’ll be fine, he was riding great”) to how our mutual friend Nick Wey is looking (“If he races like he’s been practicing, he’ll be solidly in the top ten. But that’s his biggest problem”), RV is incapable of giving anything but his real, true, honest opinion on a subject. Much to Kawasaki’s chagrin sometimes, he’s a refreshing breath of air for us media types.

All of this is well and good but can he win? I believe he can and here’s thing with Villopoto: He’s a racer. That’s the simplest way to put it really, he may not have the fastest lap time in practice, he may not be the smoothest, most technical rider out there but there aren’t too many others out on the track that, when he’s chasing you, will go as fast as he absolutely has to in order to pass you.

But therein lies the rub. With the ability to go very fast comes the ability to cartwheel spectacularly at times.  He won a season high seven races last year and going into 2011, the question is--can he make it to the end?