Luke George made his highly anticipated return to racing this weekend after a near fatal crash at the final round of the 2009 MX Nationals series. While the racing may be the same, a lot has changed in Luke's life in the last 8 months and although it was the hardest time of his life, he has a very interesting perspective on what happened and where he is going to go from here. While there is still a bit of mystery over exactly what Luke's deal is for 2010 we thought we would see what we could get out of him now the first round is out of the way.

This interview is coming straight to you from Luke's living room and this is the first time any photo's have been released from the hospital while Luke was in his coma. For anyone that is close to Luke, this past weekend was the culmination of months and months of hard work and for him to even race on the weekend was nothing short of a miracle... 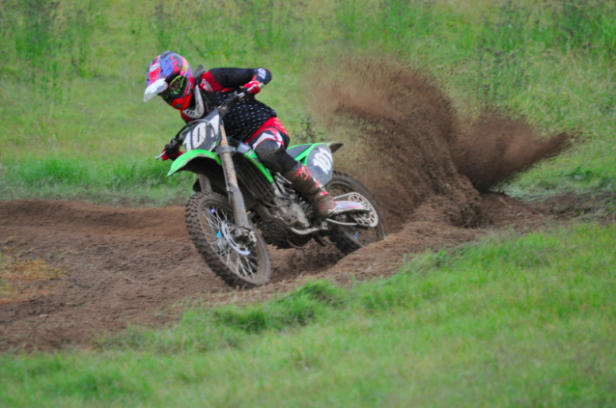 Well Luke the first race is out the way now, was this race just a case of getting the monkey off your back?


Yes, defiantly the case and as it turns out this was the hardest race of my life by far. Mentally it was really tough but it was also really tough physically too, after having so long off the bike. I really just wanted to get this race out of the way and make good of the old saying 'You can't win it at the first race but you defiantly can loose it'.

I know that a lot of people had said that there was going to be no way that you could come back from an injury like what you had, do you think that setting the third fastest lap time in qualifying might have silenced a few people?


Yeah for sure. The thing is too, I didn't really have the best run in qualifying either. To start with the laps that I did were in traffic and then I had a real freak issue with the bike so we cut qualifying short. I only got to do two laps and with this in mind I was actually pretty happy to get the third fastest time. I have to say a big thanks to my new mechanic Mike 'Wardy' Ward! He kept his head when everyone was stressing because we only had such a short time between that session and the first moto.

He just told us not to worry about it and he just got the job done. I know a lot of other mechanics would have just been freaking with that one and he made me so relaxed because he was. This was pretty much the first time that I had worked with him and just the way he dealt with that situation was the way he does everything and that's why I want to keep working with him this year.

So coming into the first moto, you go a great start, ran up front then kind of backed it down a bit. I guess it was always the game plan to leave that round with solid points and no mistakes?

Yeah that's it, I did get that good start and I pretty much didn't feel good at all but I was still able to run that pace. Being the first race back I found that my pace was there and my fitness was there but just being in that race situation was something that you can't train for at all. I made a decision mid-moto to just back it down and get a 7th or 8th with two races to go and two more opportunities score great point in the other moto's.

Driving back from the race you said something that stuck out in my mind and you basically said that you hadn't raced in 8 months and only 5 guys beat you. Your obviously confident in your ability to still win races?

To be honest with you I was really nervous before this race and I had a lot to deal with mentally. I knew that I was going to win races eventually but it still was a bit on an unknown and the first round plays on every riders mind.


Was it the first time in your career that you have ever doubted yourself coming in?

It wasn't so much doubting myself but more like what I said about not knowing what to expect from it. You always get nervous before the first one and I think that is why the first round is where you get to see everyone ride but I don't think that you really get a true indication of how the championship will pan out until you get a few rounds in.

You have a really solid group of people around you, it was pretty emotional for some of the people who are in you corner on the weekend wasn't it...

Yeah it was. It wasn't only a real tough race for me but it was equally as tough on my family and my inner circle of people. Both Mum and Dad were stressing a bit and even Logan (Luke's Girlfriend) said that she reacted differently when ever she saw someone crash, so I guess you could say that this has maybe changed the way all of us are at the races?

So on Saturday and Sunday morning your bike was covered up? What's the deal with that, the talk of the town was that it was a bike Mitch built for you?

Ok so if you have had a built of help from Mitch with your bikes, your running Monster and Thor and your best buddy is a guy by the name of Chad Reed. Is this all just a coincidence or...

Well Chad's been like my big brother since I started riding when I was 5... I met Mitch in 2009 when I raced Colorado and Monster just landed in Australia and they wanted a top level guy over here so call it a coincidence or maybe what's meant to be is just meant to be aye...


So what was the thinking behind doing your own deal this year and not going with a Factory team? You were pitting out of an Easy-Up this weekend?

Well the first race came up pretty quick so we weren't really as ready as we could have been but this year I couldn't be happier. Kawasaki is supporting me now more than ever and they are just an amazing company to be teamed up with. The other thing is I have such an amazing group of personal sponsors and support team that I was able to get by just on that and so far I can't be happier. I'll do whatever it takes to race at this level even if it means sitting under an Easy-Up and on camp chairs.


Now originally you were going be going over to the US but with the injury you have decided to do another 12 months here. This who deal came together pretty late but it sounds like you are really happy with how it has ended up?

I was going to the states to ride in 2010 but this injury was obviously a major set back. Myself and a few other people decided to just stay here and get back on my feet after such a life changing thing. The thing is, I would not take back anything when it comes to this injury. The only thing I would want different is to take away the uncertainty that my family and loved ones felt when they did not know what was going to be when I was in hospital in a coma.

The other thing was, the injury determined determined everything... Originally my family was told that it would be 3 years until I would be able to race but there was no way that that was going to happen. I pretty much had to learn to walk and talk again and people just don't realize how hard it has been do go through this and 8 months later I am on the line qualifying 3rd for the first race of the year. 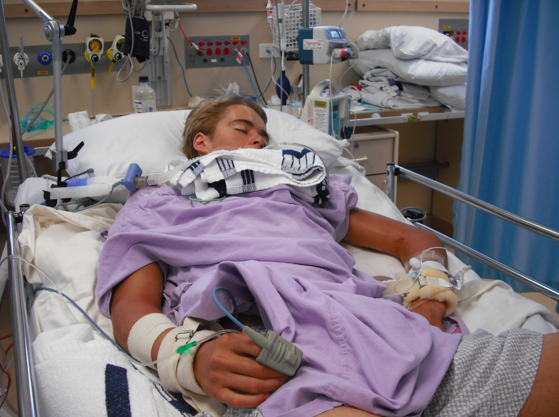 I guess the average guy might just expect that you were always going to make a full recovery but I guess when people see the photo's they might understand that this was pretty much as bad as it gets right?

Basically if it got any worse I would have been dead! It was so bad that some of my closest relatives and friends would walk it to the room and then walk out thinking that I had been moved to another room. There was a point when I was learning to walk and some of the photo's are just scary for me to look at now, thinking just how bad it was.

I guess it just shows everyone how much heart and determination that I have and it was never an option for me not to race the Nationals in my mind. But after going through those 8 months there is no motocross season or race or championship that will ever be that hard and I don't think that I will ever have to fight that hard again for anything ever again.

Well we have just got back from a day of moto's and you have just done the Canberra format, what is the game plan going into round 2?

It's just head down and bumb up for the next two weeks. I love the track there and I am going to come out swinging and it's going to be the first time this year you see the real Luke George again.
Read Now
December 2021 Issue Now Available