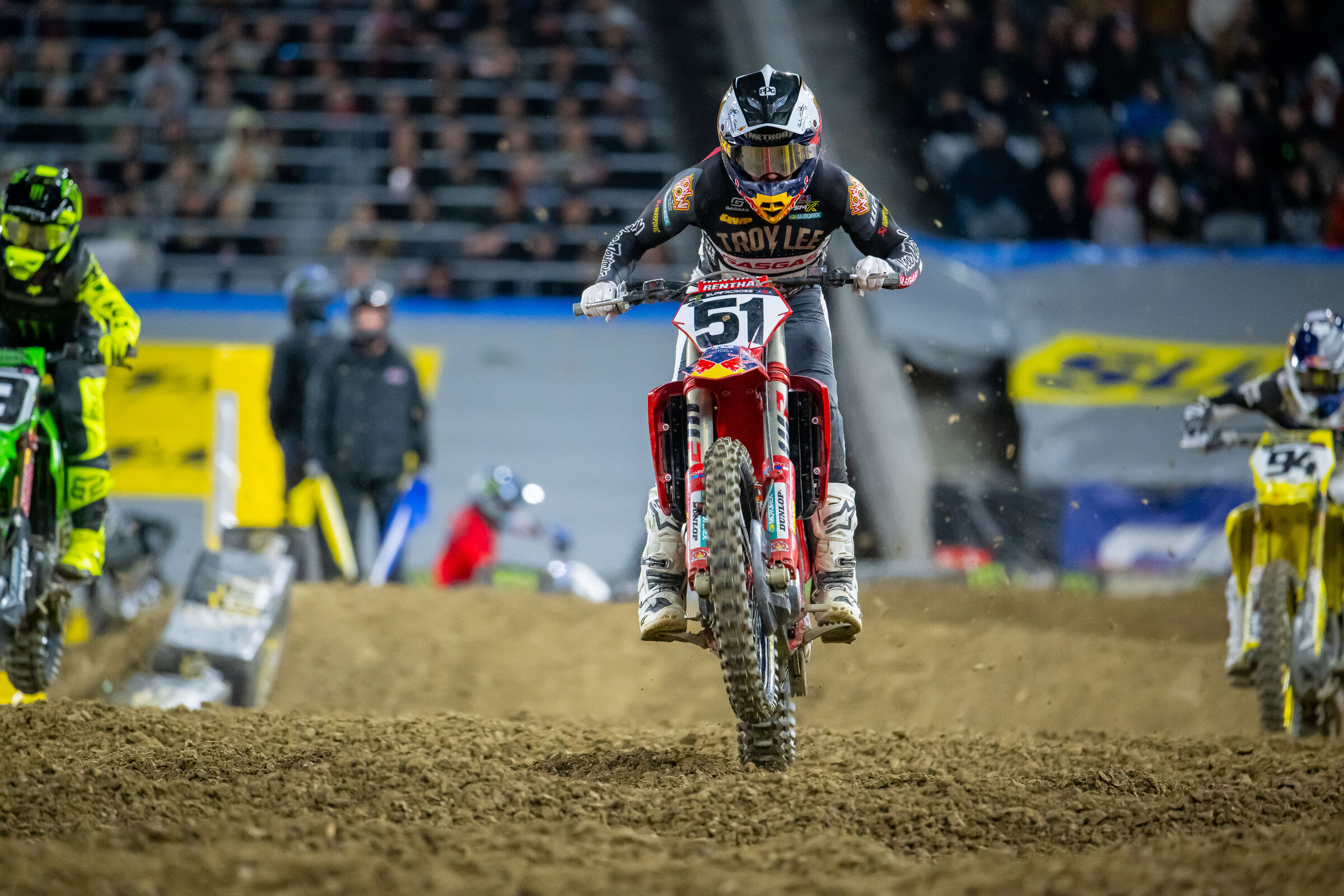 Another supercross, another day of drama for Justin Barcia. In his heat race, the Troy Lee Designs/Red Bull GasGas rider got knocked down by Jason Anderson. According to Anderson, Barcia was upset about it. Anderson took to twitter to say: “lol Barcia complaining about my move…neither of us have room to talk. But especially him. That bitch can give but cry’s [sic] and can’t take it.”

Anderson later pulled the tweet down, but it was too late, the Peacock broadcast crew had already grabbed it and posted it on the TV show.

Barcia, though, doesn’t check twitter during the racing hours, so he didn’t even know this was going on. After the race, when he was told about this drama, he said he never complained to Anderson. “I didn’t complain at all,” said Barcia.

That’s his side of the story. Meanwhile, in the main, Barcia got into Chase Sexton in the exact same corner when Anderson got into him in the heat. “I didn’t know he was right behind me,” said Sexton. “I mean, he took me clean off my bike. Not ideal.”

Barcia would rather not have the story be more rough riding incidents and drama with other riders. He’d rather the story be his strong ride in the main and podium finish. He hung tough to get it, as Ken Roczen passed him, but Barcia struck back, then held steady with Roczen on him all the way to the end.

Here’s how he summed this all up in the post-race press conference.

Justin, take me through that heat race. We’d seen some corners from Jason Anderson as well, a bit of contact together. Just take us through that heat race and into the night.
Justin Barcia: It was good racing. That corner was one of those corners where if you left it open it was going to happen. Unfortunately actually in the main event me and Chase [Sexton] came together there, too. So, it was one of those things. It is what it is. Move on from it. Racing hard. The passes were good, so it’s all good. Not holding any grudges to it.

In terms of this season for you, you’re on the new generation GasGas. How important is it to get a result like this early on? Just give us an update on your progress with that bike. Really good to get that podium second time out.
Absolutely. For me, the new bike has been great. It’s very easy to make small changes and adapt to the tracks. I did a big few weeks in California testing on it and then went to Florida for a month and just rode the bike, got really comfortable with it. Came to California and rode it again and was right on pace at the test track, so that was good. Anaheim was a weird one. Just a tricky track. Kind of was off all day a little bit, just weird. Then main event of course get a holeshot and get in the lead. Struggled a little bit and then obviously a couple mistakes took me out of that, so it was a bummer to miss round two with the weather but it’s good to come back here in the new Snapdragon stadium and have a good result. There was a lot of pressure tonight, just the battle in the race was intense. So that was good to come through that. Definitely the new bike is awesome and it is a contract year for me, so definitely want to have a good season.

You had pressure from Kenny every lap that whole race. Can you just talk about how you stayed calm and kept him behind you?
I didn’t feel calm! It was an intense race. It was a really good race. I felt like I didn’t breathe the whole race! I was super tight. I rode well, but not how I obviously would have liked to ride. I feel like Coop and Eli broke away and I wasn’t able to close that gap. Then me and Kenny had a pretty good battle. He passed me, but then I struck back really quick and got around him. I think some of the guys might have been jumping through the whoops behind me and I skimmed them the whole race and it was super gnarly. So, I probably should have maybe adapted to that a little better. But all in all, it was an intense race. The track was tricky and we got into lappers quick, so really you had to be smart and precise, hit your marks. Kenny raced me good and we talked after the race and he was stoked on it and so was I. It’s fun when you have a really good race like that for the last podium position.

You’ve been working with Eric Sorby since the beginning of the season. How does he help you with your program?
I love Sorby. We go way back. Probably my first year at Paris Supecross, which maybe 2010. So, we’ve always been friends, kept in touch. He moved over here to the US at the end of ’22. We were just able to start working together again. We’re good friends and it’s good to have him around, just riding coach. He’s really good at spotting lines. He was obviously a great racer. He was with James [Stewart] for a long time, so he has a lot of knowledge. I have a trainer back in Tallahassee that I’m working with new this year as well off the bike. So, fitness feels really good. I’m stoked on it. We had a great boot camp off-season. We also brought our baby boy into the world. Life is good. I’m super happy. The team is great. I’m pumped. It’s definitely great to have Sorby around. He’s a great guy. Just a good vibe. You want someone who’s happy at race day and he brings that, so that’s rad for me.

Round one doesn’t go the way you want and then you have too much time almost to think about it because we had an extra weekend off. How do you avoid chasing your tail and going too far the wrong direction and instead just starting over again?
Absolutely. So, what I did at Anaheim was after the first practice I chased my tail all the way up until the heat race and then I said, let’s put the bike back to base. That’s when it was best, so that was good because then I just went and rode all week, a few tweaks here and there. The bike has been really good. I don't know, it was just that first race, and you go crazy a little. It was like a rookie mistake. I wish I didn’t do that, but all in all, I got out of there healthy which was good because I did have that one crash that could have been pretty good. I definitely had a lot of motivation coming into this weekend just because like I said, bringing a good program into the season, and feeling really good. Want to be consistent, and then had that first race which was kind of a bummer. To regroup tonight felt really good. I had good speed. The biggest thing this season, I would like to qualify a little bit better. I think I qualified tenth today. So, I’d like to be top five. That would be cool. But I was stoked on tenth, to be honest, because I don’t really qualify that good. I don't know why. We’re going to keep going after those qualifying times for a good gate pick.

Did you talk to Jason after that heat race incident? There was a tweet heard around the world. There’s got to be more than one question in the press conference about this. Do you have a response to that, other than sitting on the box for tonight?
What someone said? I don’t know.

You haven’t been on it yet?
No. I don't know what’s going on. I don’t know what the story is really, honestly. It’s not very much fun. After the race, I thought he kind of stopped and waved me over and I thought it was going to be like, “That was good racing. Sorry that I knocked you down.” But that was the opposite of what happened. I was kind of like, oh, okay. That’s how it’s going to be. Then in the tunnel he was like fighting with my mechanic and stuff. I feel like I’ve tried to mature a bit and I’m just not going to get into that. So, all good. Not sweating it.

They actually put the tweet up on the air [in the TV broadcast] tonight. He said that you were complaining and that you shouldn’t complain, and he called you a bitch in the tweet.
Yeah! I’m not surprised. I didn’t complain at all. He called me over and started calling me all kinds of profanity and I was just like, all right. Then the AMA came over to the truck and asked what happened and I said, “He just called me over and cussed me out.” It was random. I didn’t say anything, so I don't know. It’s just odd. But I’m not going to get into a Twitter fight. It’s silly. Honestly, it’s just silly. I didn’t have a problem with the pass. Like I said, me and Chase, the same pass happened with us and obviously I didn’t want that to happen. I think Jason wanted that to happen. But like I said, no big deal. No hard feelings. If he wants to curse at me, that’s fine. I can handle it. I have pretty thick skin, I feel like. Move on from it and let’s go racing. It’s a long season. I don’t feel like I need to pay him back or anything, but I race hard. So, let’s go.

So you would have raced Anderson clean if you caught him in the main? You had no grudge? You thought the pass and everything was good between you guys?
No, I was not going to do anything stupid. I’m trying to make up for that first round race that wasn’t so good. Just trying to make up points. I want to have good racing all year with these guys. Right now, he’s sitting here, I told Ollie, crew chief, I was like, “Hey, if you see Chase tell him I wanted to go talk to him like a man.” I like Chase. We’re good friends, or I feel like anyway. So it was a bummer that we came together. But I wasn’t going to put any retaliation. It was a solid pass. It was a bummer I went down, obviously. I was not happy, but I wasn’t going to go up to him and fight or do anything stupid.