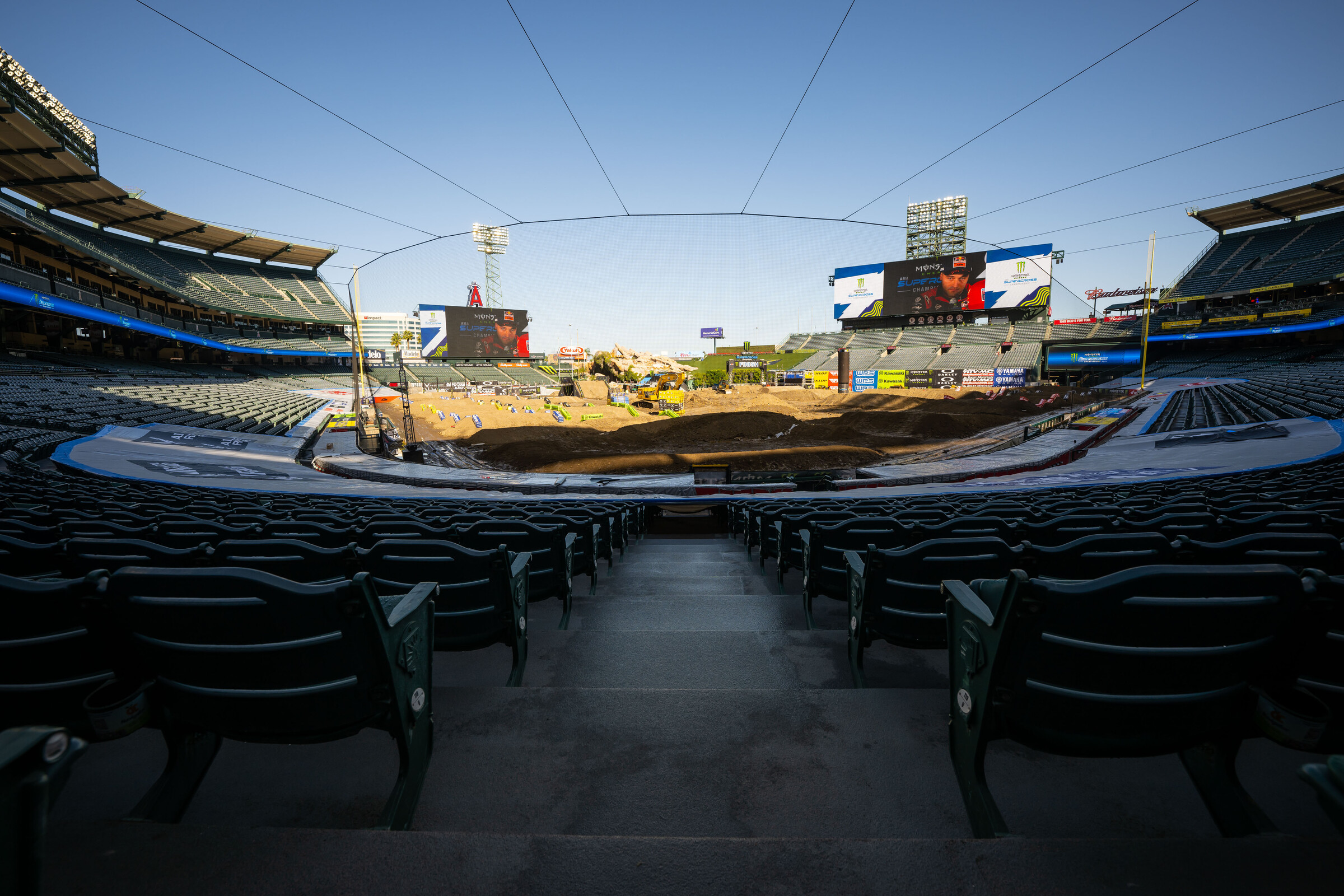 Welcome to Racerhead, coming to you on the eve of a brand-new season, straight from the Diamond Club here at Angel Stadium in Anaheim, California. Tomorrow night the gate will drop on the opening round of the 2023 Monster Energy AMA Supercross Championship—and the all-new SuperMotocross World Supercross Championship (SMX). The press conference just wrapped up, and hopefully you tuned in to see and hear from all of the top riders and their team managers, co-hosted by SuperMotocross Insiders Daniel Blair and our own Jason Weigandt. It's like the first day of school (or homeschool) for the supercross set, with everyone showing up with their new team outfits and bookbags and press kits and all that—more of a social event than actual work. Tomorrow is when everyone opens their textbooks and the semester starts. If you haven't grabbed your Peacock subscription (in the U.S.) or SuperMotocross.tv (international) sub, grab it tonight and then hit the ground running/watching tomorrow.

As they roll in for this press conference, everyone looks confident and ready, which they should—they’re all sharing the points lead right now. That of course changes tomorrow for the 450SX guys, as well as the 250SX West Region. It should be an amazing supercross season, and it all starts tomorrow.

Beyond this, though, it was a tough week for many in the supercross/motocross world. The news of Ken Block's passing on Monday in a snowmobiling accident hit hard. Ken was incredibly well-liked and highly respected in our sport—and long before he became his own global brand with his Gymkhana videos and Hooligan Industries. Before all that, Block and his partner Damon Way founded an action-sports clothing brand from the art department at Palomar Community College that became DC Shoes, and through that company Ken sponsored countless riders over the years, both professional and amateur. He was generous, brilliant, funny, and just plain cool. Jeremy McGrath, Travis Pastrana, Ricky Carmichael, Adam Cianciarulo, Ken Roczen, and many, many others became close friends with Ken, and remained that way long after he and Way sold DC Shoes to Quiksilver in 2004. After that, he began his rally car career, using the marketing and production techniques he brought from the action sports world to that arena. Then he became just as big an action sports icon as any of the moto guys, skaters, snowboarders, and everyone else he had sponsored over the years. Yet he never changed, which is why this hit so many so hard. He was a truly beloved man, a beloved husband to his wife, Lucy, and a beloved father to their children, Lia, Kira, and Mika. The family he left behind also made this such a damn shame. His impact on the action sports world, the motorsports world, and probably everyone he ever met will not be forgotten. Godspeed, #43.

Forgive me for cutting this intro short, but it's time for the presser to start behind me, and all of the news and information that I would have for this week is about to be mentioned in there as Weege and Blair are underway. Make sure to check out all of the preview videos, our features on past season openers, and the interviews with some of the riders that we grabbed in this very busy lead-up to Anaheim 1. See you at the races.

This is, as they say, the big one. There is no bigger stage than Anaheim 1. Riders lie in bed at night thinking about this race for months on end. Honestly, there is way too much emphasis put on this event. Is it an awesome atmosphere? Absolutely. Does everyone think this race determines the level of preparation and readiness that riders put in during the off-season? Sure, but they shouldn't. Anaheim is its own beast. Don't believe me? Go look at the results and then compare them to the overall season. Anaheim 1 very rarely translates to the rest of the season. There is too much pressure, anticipation, and “newness” to be a good gauge for what we’ll see over the next 17 rounds. That's my best advice for riders with jitters and uneasiness. A1 is one round of many. It doesn't count for any more than Detroit, Houston, or Seattle, so don't put more emphasis on it than you would a round in April. Understand that it's a pressure cooker for everyone and things will settle as the rounds roll forward. Take a deep breath and rely on your training foundation. Let the fans and media hype up A1 to the stratosphere. Keep your mind on the task at hand.

A1! A1! A1! Get ready for flat bill hats, bumpin’ fists, and dap'n dudes down in Anaheim on Saturday! I got sucked into doing a PulpMX fantasy league with Matthes, Weege, JT, Chris Betts, and Blake Savage. At first I wasn't too stoked on it, but after we had our snake draft on Monday night's PulpMX Show, I am kind of excited. I think I have a really good team—what’s awesome about it is they all believe in the "HOMELIFE," which is the name of my team! I’ve even gone as far as making some helmet stickers for “my team” to wear. Chance of Webb and Ferrandis putting the stickers on their lids? Zero percent! But I'll have them ready just in case! Team Homelife consists of Cooper Webb, Dylan Ferrandis, Dean Wilson, Cade Clason, Kevin Moranz, and Henry Miller. I think it's a solid team. So be ready boys, this newbie to fantasy is about to kick all of your asses!

Many of you remember Sarah Whitmore as a multi-time Women’s National Champion at Monster Energy AMA Amateur National Motocross Championship at Loretta Lynn’s Ranch and a multi-time WMX race winner. She’s actually been working for us here at Racer X for about a year now, usually behind the scenes, so you haven't seen her name much (yet) as an author. But now we'll have to give her a few weeks off. Sarah and her husband, Phil “Smagical” Smage (former AMA National Trials competitor) welcomed their first baby into the world this week, Finnegan Rush Smage! Congrats to Sarah and Smagical. You can bet Finnegan will be on a bike developing those trials and moto skills in no time!

We've all broken down the top elite riders for Anaheim 1 over and over. We'll see who gets the wins and the title by SLC, but what I find interesting to watch is who is the islander, aka privateer, who steps up in 2023. There's always a guy or two who has done the work and puts it into a bunch of mains. For example, Ryan Breece last year was great right from the start after missing all of 2021 with an injury. Then Justin Starling and Cade Clason started riding well and battling for top privateer in the mains. There's a thing with being that top guy out of your van each week—I know this because when I worked for Tim Ferry in '99 we battled Phil Lawrence for this honor each week, and in 2002 with Nick Wey it was Heath Voss that we were determined to be better than.

Breece is out with an injury. Starling, Clason, and Logan Karnow are all looking to take that step up now that the uber-privateer, the old man, the traditional top privateer Kyle Chisholm (who frustrated all these guys week in and week out) has turned big time factory dude with the Twisted Tea/HEP Motorsports Suzuki guys. Alex Ray also is a little like Breece where he's three digits, he's coming off a crappy year, and he’s looking for something to prove. He's healthier than he's been in a few years, he's got Yamaha support, and he might be a guy to watch. As we know, A-Ray can send it.

Kevin Moranz is also full-time 450 now and is a great starter, so he'll be a factor in a lot of LCQs this year. And again, maybe there's a Breece out there in 2023 who will surprise us all. This part of the unknown is exciting to me.

On another note, the 722, Adam Enticknap, has decided to call it a career and is taking the next step in his life with some announcing. Addy is a real self-made dude, popular on and off the track, and certainly had a strong fan base. We'll see him around the races for sure.

A really strange and bizarre race took place in 1985 at the final round of the World SX series. It was called the Rodil Cup, and it featured America and European riders. It was also the first 125SX that had East and West combined. There was a staggered start, riders faking injuries, bike problems, Rick Johnson grabbing a mic and being very upset, and much more. Oh, and did I mention it was at the Los Angeles Coliseum? We had DC—he raced that night—and Jim “Hollywood” Holley, who won a WSX title that night, join Weege and me to try and recap all of this madness. Listen to the podcast now.

Time is running out! Only two days until the gate drops on the 23SX Anaheim opener. Our 2023 Storm Lake Honda Supercross is open to join! Get signed up today for your chance to win the Grand Prize 23 CRF110F courtesy of StormLakeHonda.com.

I was texting with MC last week & he is sending me an autographed set of gear to give away! All you have to do is JOIN our 2023 Storm Lake Honda Supercross League & your name is automatically entered.

You are instantly eligible to win our 23SX random drawing to receive an autographed set of gear from the King of Supercross. That's it. That is all you have to do. You don't have to be a master of Fantasy SX to win. Just get signed up & join to win!

PulpMX Fantasy is free to play but if you want the opportunity to win prizes, sign up for the Championship League. Visit pulpmxfantasy.com to sign up today!

Signups for the 2023 season are now open!

Go to https://www.rmfantasysx.com to register.

And here's the Ryan Villopoto THOR commercial from 2008:

Head-Scratching Headline/s of the Week

"Scientists have once again created a new tool in the stiff battle against erectile dysfunction—and this time, it doesn’t involve a pill."

Dunlop is proud to continue their support and relationships with all their top teams from 2022 and pleased to add the Muc-Off/FXR/ClubMX, Firepower Froth Honda Racing and BarX Suzuki teams to the Dunlop Family for 2023.

For the latest from Canada, check out DMX Frid’EH Update #1.

Thanks for reading Racerhead. See you at the races!