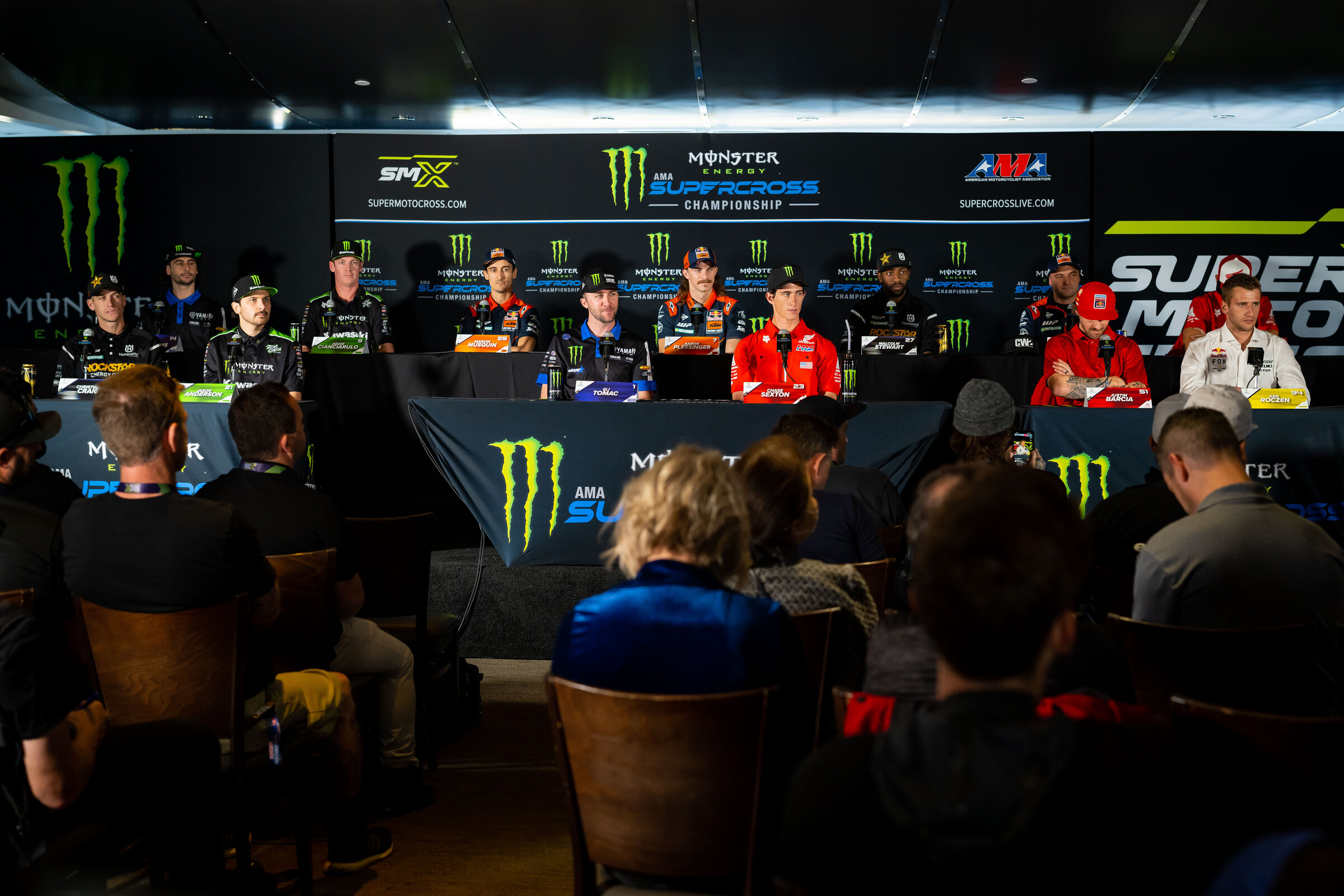 3 on 3 Key A1 Press Conference Takeaways

With just one day remaining before we kick off the 2023 Monster Energy AMA Supercross Championship, riders and team managers faced the media on Friday at Angel Stadium in Anaheim to preview the upcoming season. The typical “bike is great, excited to go racing” was common throughout the day but there were some highlights to talk about.

Starting off with the team managers, Suzuki’s 450 effort is now headed by Larry Brooks after he spent several years with BarX Suzuki. Brooks not only lands in a new role back in the 450SX class but also landed a big offseason signing in Ken Roczen as well.

“I think our base is pretty good,” said Brooks of the Suzuki platform. “Obviously, they worked with the motorcycle a bit last year and I think they’re in a pretty good spot. He’s [Roczen] really fast at our tracks but when you go to a racetrack with 19 other super-fast guys, you quickly learn where you’re at.”

Another big talking point with team managers was ironing issues with new machines. KTM’s platform is now a year old but was the talk of 2022 due to struggles from nearly everyone on it. Red Bull KTM team manager Ian Harrison was asked right away about that.

“We’ve been busy [this offseason],” said Harrison. “We had a new platform last year and I think we lost our way a little bit. Once you start losing ground, you start second guessing yourself.”

Harrison went on to explain though that he feels the team is in a much better position with the motorcycle, particularly after some key tests in late October. Another team dealing with a totally new bike is Monster Energy Yamaha/Star Racing who will race the 2023 Yamaha YZ450F for the first time this weekend. Team manager Jeremy Coker was confident though that the platform is one they can win on.

“Yamaha did a great job giving us a really great platform to start with,” said Coker. “Both riders are happy on the motorcycle. It’s kind of nice to have a little bit of a challenge coming into the season.”

Sticking with the same platform as before is Honda HRC but they also ran into some comfort issues which plagued Chase Sexton in supercross and arguably was a reason Ken Roczen looked outside of Honda machines for 2023. Team manager Lars Lindstrom realized those issues needed to be cleaned up.

“We had a few things we needed to work on last year that Chase was really hoping to focus on,” said Lindstrom of the offseason. “A lot of that got taken on by Japan and HRC and us on the team. Together I really felt like we were able to address those issues we needed to address.”

Once the team managers were wrapped up, it was time to welcome the 250SX West contingent to the stage. Headlined by reigning 250SX East champion Jett Lawrence, the Honda HRC man will race inside of Angel Stadium for the first time since his violent crash out of second place at Anaheim 2 in 2020. That moment was weighing a bit on the mind of Lawrence today.

Lawrence also was potentially going to race a 450 on the East Coast as he prepares to move up to the class full time this summer. However, after some discussions with the team, it sounds like that will no longer be happening.

“Originally yeah I was thinking of racing a few races on a 450 on the east but we’re playing the safer route and waiting until outdoors,” explained Lawrence.

One of Lawrence’s main challengers could come in the form of Monster Energy/Pro Circuit Kawasaki’s Austin Forkner. Forkner and Lawrence collided last year in Arlington, which broke the former’s collarbone in the process, but Forkner does now have 12 career 250SX wins to his credit after he came back late in the season to win in Foxborough. Forkner is hoping to come out with a bang on Saturday night.

“I’m more of a veteran of the class now,” said Forkner. “The plan was to not be in the 250 class this long but obviously a lot of things happen. Last year I came in probably a little bit tentative but this year I’m trying to come in hotter and not be so reserved.”

Forkner’s teammate, Cameron McAdoo, seemed fired up to prove a point this year and when asked about trying to beat Jett Lawrence straight up for a title, he simply said, “I respect Jett and all these guys that I’m racing, but I’m here to win.”

It was also brought up that Monster Energy/Pro Circuit Kawasaki rarely announces which riders will race West or East but they did so this year which was a bit peculiar. Both Forkner and McAdoo said that it didn’t matter if it was announced or not since they were both ready to race tomorrow and would have been ready to go whether it was West or East.

Rockstar Energy Husqvarna’s RJ Hampshire was second in points behind Jett Lawrence in 250SX East last year but was vocal about struggles that he had with the new Husqvarna platform. He appeared to know that last year wasn’t really what he thinks he’s capable of which could mean he’s a whole lot better in 2023.

“I still learn stuff every year,” said Hampshire. “I wasn’t necessarily confident that I could go into last year ready to win and I know where my speed is at now. We’re still writing this story so hopefully we can figure it out this year and be in the title fight.”

A huge list of 450SX riders then hopped up to the stage headlined by Monster Energy Yamaha/Star Racing’s Eli Tomac. As mentioned above, Tomac will be entering 2023 on a completely new Yamaha machine than he found success with last year, and that certainly will be a question mark this year, but the overarching question is whether or not this is Eli Tomac’s last year of Monster Energy AMA Supercross.

“It’s hard to say,” said Tomac. “I’m not going to say right now if I’m going to be done this season or now. As you get older you start to enjoy things and enjoy the racing more. I’m going to enjoy the moment as much as I can.”

Tomac’s teammate Dylan Ferrandis has reported he really likes the new Yamaha and actually explained he’s happier on the new machine than he ever was on the old one on which he won the 2021 AMA Pro Motocross Championship with.

Eli Tomac’s main competition for the 2022 championship came from Monster Energy Kawasaki’s Jason Anderson but Anderson arguably fell out of the championship picture in the middle of the season due to a few crashes and run-ins with his competitors. Anderson was asked what he’s going to do this year to try to make sure that doesn’t happen again.

Anderson’s teammate Adam Cianciarulo was perhaps the most introspective rider at the press conference as Adam opened up about his struggles coming back from injury. Cianciarulo had an issue with his arm that was causing arm pump to develop quickly but he had one last little surgery recently that he hopes has finally rid him of the issue.

“I feel good,” said Cianciarulo. “The last couple months, I won’t lie, I had some things I needed to work through. You obviously want to be able to feel your handlebars the best that you can. I don’t see it causing a problem moving forward. The goal is to remain healthy.”

Two-time Monster Energy AMA Supercross champion Cooper Webb is back training with Aldon Baker this year after leaving his program at the end of 2021. Webb did not collect a win in 2022 as he struggled with that new KTM but he said he spent a lot of this offseason playing hardball with KTM to make the right changes to the machine to get him back to where he was.

“We’ve made a lot of progress,” said Webb. “I’ve definitely been very difficult this offseason with the team. Started this summer early where we went back to basics with the team. I know what I felt in 2021, what it takes to win, and what the bike needs to be like, and I feel like we got there in this last month.”

Lastly, there was the story of Ken Roczen who has left Honda HRC after six years with the team and joined up with Progressive Ecstar Suzuki for 2023. After one of the most intriguing off-season’s ever for a top tier rider in the sport, Roczen explained today that the change to Suzuki was something he really needed.

“I think it was a change that was desperately needed for me,” said Roczen. “It kind of came out of nowhere to be honest. I’ve been feeling really good as well. I want to reestablish myself. The results weren’t there and there were a lot of struggles. I’ve really started loving riding and racing again this year.”

There was also a lot more chatter from guys like Chase Sexton, Malcolm Stewart, Justin Barcia, and more, who believe they have strong seasons coming. But the talking stops now and the reality for many will set in when the gate drops tomorrow night in Anaheim. Who really had a great offseason and is loving their bike? Let’s go find out!