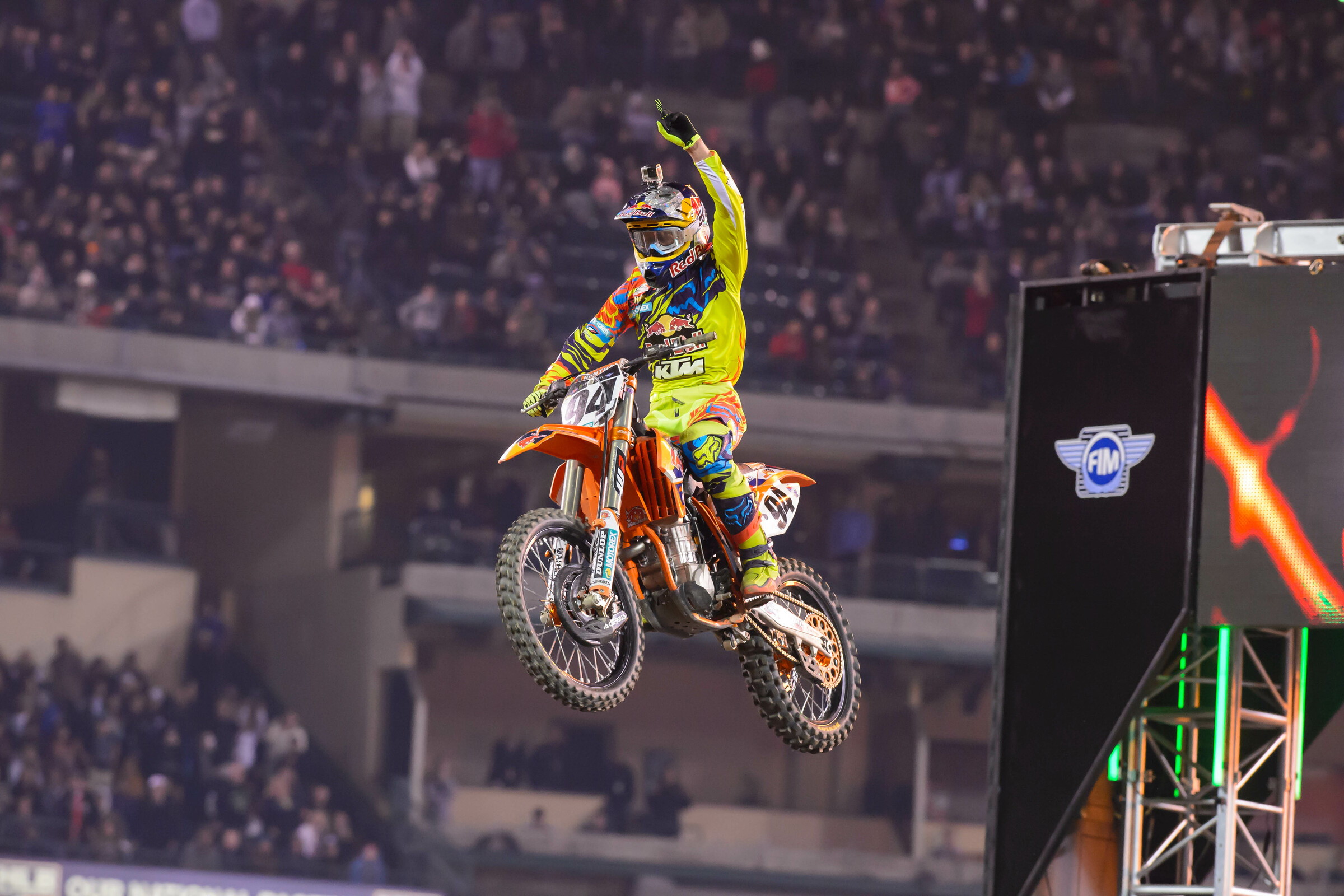 With the 2023 Monster Energy AMA Supercross Championship almost upon us, now might be a good time to take a quick refresher course on previous opening rounds of the series by checking out the Racer X Online Vault. It has all the results from this series, going all the way back to 1974. Or just use our results tab above to find every AMA motocross and supercross result. There's also the invaluable Cycle News Archives.

After digging through this, we noticed some interesting trends, oddities, and side stories about previous opening rounds. Unfold them and you'll realize the opener is one of the strangest races of all, so we’re going to take a look back.

From 1982 through '84 there were three different Anaheim SX opener winners, and for all three of them it was their first AMA Supercross main-event win. All three were also Honda teammates, and all three went on to win their one and only AMA Supercross Championship that same season: Donnie "Holeshot" Hansen ('82), David "Little Professor" Bailey ('83), and Johnny "O'Show" O'Mara.

From 2019 to '21, Justin Barcia won the opener three years in a row—the first two at Anaheim on Yamaha YZ450Fs, the third aboard the GasGas in its maiden AMA Supercross voyage when the opener was actually held in Houston.

From 1994 to '96, Team Honda's Jeremy McGrath also won all the series opener all three times, with all three races held in Orlando. (From '93 through '96 Anaheim served as the third round of the series, and McGrath won it all four times). That makes McGrath and Barcia the only riders in SX history to win the opening round three straight times. (And it was at the ’94 opener in Orlando that McGrath debuted his new trick, the nac-nac.)

In '97 the series opener moved back to California—but not Angel Stadium, which was undergoing renovations. The Los Angeles Coliseum subbed in for Anaheim for two years. In both of those years, an international rider with at least one FIM Motocross World Championship to his name won the race: South Africa's Greg Albertyn and Frenchman Sebastien Tortelli. It was the only AMA Supercross win for either man.

Albertyn and Tortelli are two of only three riders whose only premier-class win in AMA Supercross came at the opening round. The other is Josh Grant, who won the ’09 opener for the late Coy Gibbs’ JGRMX Yamaha team.

McGrath added two more opening-round wins in 2000 and ’01 when he was on a Yamaha, making him the all-time leader in SX opening round wins with five.

There were two different opening-round winners in the first AMA Supercross Championship, which took place in 1974 (and was actually called the AMA/Yamaha Super Series of Stadium Motocross), as the two classes—250 and 500—were considered pretty much equal. The race took place at Daytona, and the winners were both foreign riders: Dutchman Pierre Karsmakers (250) and Belgium’s Roger De Coster (500).

From 1976 to 1984 there were nine different winners of the series opener, as no rider was able to repeat:

Finally, in 1985, O'Mara repeated as the winner, but with a catch: 1985 was the year of the two-moto format in AMA Supercross, and O'Mara went 2-2, taking the overall from Yamaha teammates Broc Glover (1-3) and Rick Johnson (5-1), which left a lot of fans confused. The format was ultimately scrapped before the '86 season. But if you count each of those two motos in ’85 as separate “main events” then you would have 11 different winners in eleven opening-round main events!

In 1986, the night of the famous Anaheim '86 showdown between new Honda teammates David Bailey and Ricky Johnson, the defending series champion, Kawasaki's Jeff Ward, failed to even qualify for the main event due to a crash in his heat race and a broken throttle cable in his qualifier, which ended his night. Back then the rules said you had to finish the heat race to even make the semis and LCQ. Ward left the track before the race and stopped at a nearby Del Taco drive-thru to get something to eat. He could hear the cheers from his car as Bailey and Johnson battled it out in a race for the ages.

One year later, Ward avenged himself by winning the Anaheim opener while Johnson, the defending series champion, suffered a DNF due to a concussion. Ward would go on to win his second AMA Supercross title that year.

Nineteen eighty was the one and only season that AMA Supercross started out with a weekend doubleheader (February 9 & 10). The races were held in Seattle at the Kingdome and counted as separate rounds. The winner of both nights was Yamaha’s Mike Bell, who would go on to win the 1980 championship.

The first time Anaheim hosted the opening round was 1981. That race was won by Suzuki’s Kent Howerton.

In 1975 the series started at Texas Stadium in Dallas, with a two-moto format, as well as two classes. Can-Am’s Jimmy Ellis went 1-1 to win the 250 class, while Maico rider Steve Stackable won the 500 class with 3-1 finishes. Defending AMA Supercross Champion Pierre Karsmakers was not there after injuring his knee in the preseason.

Kevin Windham won the "perfect storm" opener of 2005 aboard a Factory Connection Honda CRF450, marking the first time the series opener was ever won by someone on a four-stroke. It was an umbelievable mud race. This was a pivotal year: after 2005, no two-stroke would ever win an AMA Supercross again, and the last man to actually win a main event a 250cc two-stroke was Yamaha YZ250-mounted Chad Reed at the '05 finale in Las Vegas.

Here’s another crazy oddity: Neither five-time SX champion Ricky Carmichael, nor four-time SX champion Ryan Dungey, nor two-time SX champion Eli Tomac has ever won the opening round in the premier class of AMA Supercross. RC had eight shots at it from '99 through '07 (he was out injured for the '04 AMA Supercross season). Dungey had eight from '10 through '17. Tomac has had nine since 2015. (Eli was injured in his first heat race to start the '14 season, his rookie year in the 450 class, when he crashed with Jake Weimer and withdrew for the night. He's raced nine opening-round mains since.) So if you count 2014 through now, 2023 will be his tenth and possibly last chance to win the opener.

We’ll end here. If you know of any other interesting factoids about opening rounds in Monster Energy AMA Supercross, let us know in the comments!