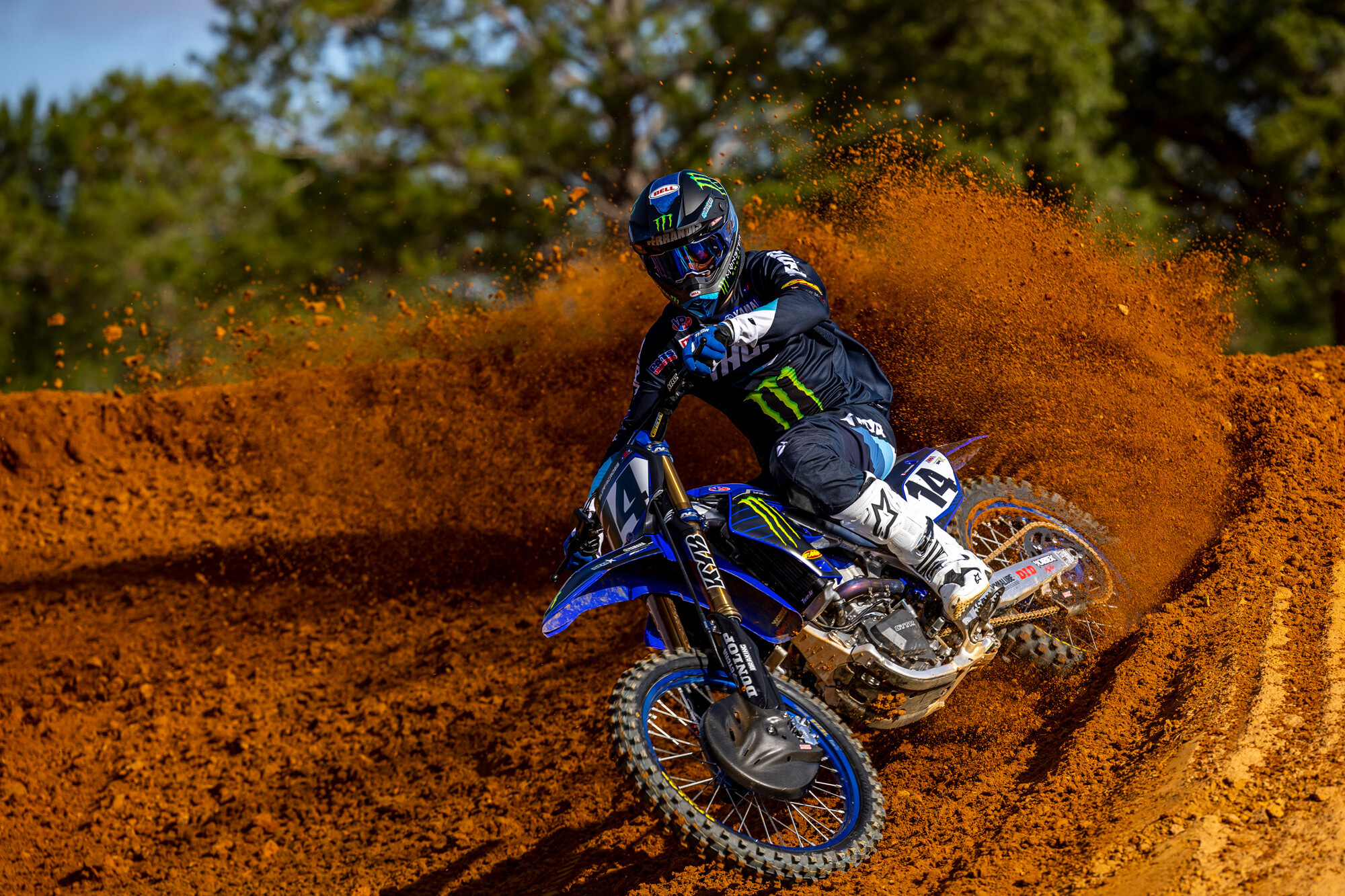 With the opening round of Monster Energy AMA Supercross at Anaheim 1 only a few days away, preseason predictions are all over the map. Everyone with a laptop is a critic these days, and they love to be heard when it comes to why they think their favorite rider will win. That’s why we turned to test rider Kris Keefer to get his educated opinion after riding some of the new bikes (and one not so new bike) the riders will be lining up on this weekend.

Racer X: Kris Keefer, you’re a real, actual test rider, and you’ve ridden the 2023 YZ450F a lot. What do you think about the motorcycle, and what might it mean for riders like Eli Tomac and Dylan Ferrandis?
Keefer: All right guys, unlike what [Steve] Matthes says, and the videos we have done for Racer X, it is not the Jesus Christ of motorcycles, okay? It is a new motorcycle, and obviously everyone knows when you have a new motorcycle in the racing world it’s tough to get parts, tough to do all of the testing and fit everything in, in that short window of time before January. So here we are, a couple of weeks out, A1 is right around the corner and look, Yamaha has done a good job with their new motorcycle, but it is a new motorcycle, and it feels completely different. If Honda and Yamaha got together and had a baby this is the 2023 YZ450F. It’s a stiffer frame—it acts a little bit different coming into corners, it has a little bit of twitch, and from what I have heard the riders have been feeling this leading up to January. So, there is a lot of work going down. From what I have heard, Dylan gets along with the bike a little bit more than Eli. Eli was more particular with certain parts going on his bike. I know some of the ’22 parts have found their way back on the ’23. So regardless that it is a brand new frame and a brand new engine, there are some things that the team can do to get that old feeling back. So that’s what they’re doing. But I do think the Yamaha boys in the 450 class do have a disadvantage come January. And it wouldn’t surprise me to see Eli, as well as Dylan, not on the podium come A1.

Okay not tons of changes this year at Honda HRC, but they do have a new rider over there, and obviously Chase Sexton is also coming into his own. Keefer give us your thoughts on the Honda CRF 450R.
We all know Kenny [Roczen] left Honda right, he wasn’t happy with his bike. But let’s call a spade a spade, Kenny is never happy, even if he wins on the bike, he’s still not happy. ‘There’s room for improvement no matter what. I just won! There’s room for improvement.’ Honda actually recognized that, and they’ve been working with Chase, obviously you know Colt Nichols is on the team as well. After the outdoor season last year, they went to Florida and did some testing, they have found some more comfort. So, I don’t know if we are going to hear the rigid talk or ‘My bike is not the greatest in the whoops’ talk from Chase. I think Chase has found a good spot for him and his chassis. Colt is going to benefit from all that. Obviously, I think Colt is anywhere from an eighth- to a twelfth-place rider. But for me I think Chase is my pick for the 2023 supercross championship, because the guys over on the orange side and the blue side are dealing with some new bike issues. And Chase and the guys over at team HRC have found a better setting and they’re working on the same type of bike. So, I think it's going to be more seamless for them to open it up in January. And we all know my favorite term for Chase is Gisele Sexton because he is the most beautiful rider to watch, but sometimes, sometimes man, that Giselle slips a heel coming down the runway and you find that Gisele laying on the ground in the dirt. And oh my god I cannot believe it. You can never find a rider that rides a bike more fluidly than Chase and make some of the stupidest mistakes ever. So, Chase also told me that he is working on some mental things for him during the races. So, when you see those halfway signs come out, 15 minutes in, look for a better, more sturdy Chase, and not to slip a heel. We don’t want Gisele to come back.

Okay so there is so much talk here on the new generation bikes that came out last year for Husqvarna and KTM, and now Gas Gas has them as well. So, what’s up with these Austrian bikes, and if you have some thoughts on their riders let us know.
All right so the Austrian guys, now we got Barcia back on the new frame, we all saw Cooper Webb and Marvin Musquin in Paris, didn’t have the best time in the whoops. That’s kind of been the theme, right? We keep hearing Cooper and Marv haven’t been really stoked on these new generation frames from KTM, as far as whoops go. You watch anywhere else on the track—you watch Marv and Coop and they look superb on the whole track besides the whoop section. And we all know Marv is a jumper through the whoops, Cooper can kind of have a blend of both. But Cooper has been in California a lot this preseason. They’ve been working on hardpacked whoops, the softer whoops seem to not be an issue with the KTM chassis. So, it's funny to me that KTM had to wait this long to get to work, to get some parts, but from what I’ve heard it's taken a long time post-Covid to get some of these parts they want. They have them now, Cooper is happier, so let’s just calm down a little bit and say he’s not stoked on the chassis but he’s in a happier spot.

From what I’ve heard Marv has been the fastest in preseason, no surprise to me, obviously Weege and the guys were out there for the media side of things for KTM say Marv looked really good and all of the guys internally say Marv has been superb. What I am curious, and what I think is going to be really cool to see is, we got Malcolm Stewart, we got Christian Craig. Look, people don’t really talk about Malcolm, third in the series last year, solid, solid guy. We complain about the whoops, then we watch Malcolm go through the whoops one time and it shatters all of those opinions. So, there is some of that there, but I also am really concerned. I have a group message with me, Matthes, and Christian. Me and Matthes always hound him ‘Is the bike good in the whoops?’ He says’I am just as good in the whoops on my Husqvarna as I was on my Yamaha’ So, that is not going to be an issue for 2023. But, unlike what everybody thinks, I do think Cooper is going to win some races, he’s going to be back. It’s funny how our industry forgets about riders when they have a couple of bad races. You know what, I have been on the Cooper bandwagon for a long time. I even bought some merch this off season. That’s right, Christmas came early for me—got some Cooper Webb merch in the house so I am going to ride that train. I think he is going to be the best steel -ramed rider in 2023.

You’ve tested the stock 2023 Suzukis, and also the 2018’s, but you also got a chance to ride the actual race bikes of HEP not too long ago. Tell us what you know about these bikes. Everyone wants to know how it's going to go for Ken Roczen.
Alright so Kenny is coming in hot for 2023, we talked about this on the PulpMX show. Would anybody be surprised if Kenny came out and won A1? Nope. Would we be surprised if he got fifth? Nope. It's one of those deals, not a lot of expectations for Kenny on the outside of our industry. All there is, is upside, if Kenny wins on this Suzuki, he is going to be a god and Suzuki sales are going to climb up. But from what I was told he had his mind made up prior to even going to the HEP Suzuki test. He’s like ‘Look I am already committed to this; I am going to show up. I am kind of dragging butt a little bit after my world supercross tour, but I am going to show up and do it.’ And he told the guys when he was at the test ‘Hey man, I am just going to ride, I am not trying to pin it.’ But after the test was done, he was so blown away by the bike and how fast it was but how well it cornered. But most importantly how he could ride it in the whoops. And that’s the one thing he had a problem with going to the Honda. So, from what I have learned from riding the HEP bike and the stock bike, it's not as rigid feeling as a Honda. Sure, we are working on 2018 technology, but look at the Vital guys and the forums, those guys need to relax. Calm down. Sure five to six years is a big difference in technology, but coming from an ’18 Suzuki and a ’23 Honda, there are still a lot of upsides with the Suzuki and that comes from chassis comfort. We normal consumers, we worry about all of the bling, all of the stuff, but the fast guys, what they care about is chassis comfort. They can make an engine fast. And they have Jamie over there at Twisted Development, he makes an incredible engine. That’s one thing I noticed when I rode the bike, lots of bottom end, but it's really connected to the ground. And the frame has more flex feel than that Honda. So, I think Kenny is going to be the best we’ve seen. Does that mean he is going to be in the championship run? No. But it would not surprise me if he stretched out three to four wins and we see a guy kickstart his machine. Right, kickstart it, we are not going to throw an electric start on, everyone is saying they are going to put an electric start on. No. We are not doing that, we are going to kick it. And there should be no issues with Kenny going through the whoops in 2023. I am going to be watching heavily at A1 to see what’s on Kenny’s bike, but it's going to be six-year-old technology everybody. Just wait.