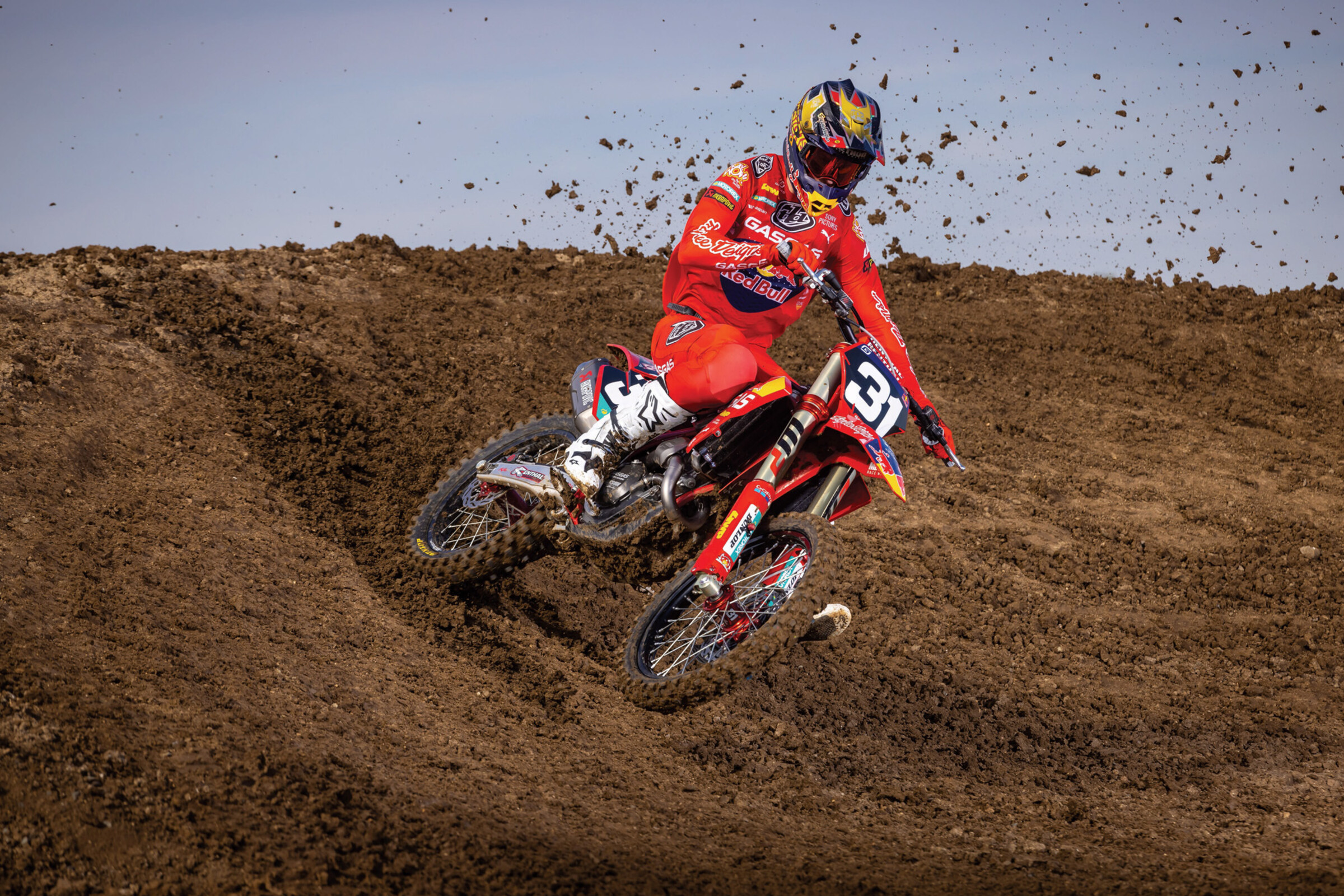 Between the Motos Michael Mosiman

Troy Lee Designs/Red Bull/GasGas rider Michael Mosiman is now entering his sixth full season of professional racing. A career that has seen steady improvement that pushed him to his first career 250SX win at San Diego last year, Mosiman seems to have a lot of things going in the right direction. But the one question mark that has surrounded him in recent years is his likeliness to crash. Though most of his recent crashing has not resulted in any lasting injuries, it has cost him chances at more wins and championship runs. But even with that in mind, he still had a very strong year in 2022 and has now flown a bit under the radar as someone who factors as a serious title contender in the 250SX East Championship this year.

Mosiman is a very introspective individual who never seems to shy away from giving thoughtful insights into what he really feels about himself or the sport. When we caught up with him in December at the Troy Lee Designs/Red Bull/GasGas intro in late December, he explained his 2022 season in detail through his own eyes to better understand how he truly feels about his title chances coming into 2023.

Racer X: Getting into the new bike a little bit. What am I going to expect from you in 2023?
Michael Mosiman: Greatness [laughs]. I think you can expect really good things. I think we’re in a good position. I want to continue to go stiffer. Currently with our setup and where we’re at, I think we have just a little bit more to go but otherwise it’s quite comfortable. I think the nature of the motorcycle is a little bit more stable and honestly, I don’t find myself making many mistakes or even when I do make a mistake it almost sort of cleans it up. So, I think you’ll expect to see me crash less. I know that’s maybe a big statement, but I do think that plays a part in it and having the right bike setup and that’s something that I’m trying to be more attuned to. I really like it.

I didn’t want to bring up the crashing thing but since you did, I wanted to ask you how you kind of learn from those mistakes you make? Sometimes it seems like freak deals but what do you take away from those that you try to do differently?
Yeah, you know, totally, I think that’s a great point. And the toughest part is that sometimes it is a freak deal and sometimes it’s my mistake. If I had to be honest, I think a lot of it is mental. It’s tricky because sometimes you can be in a place mentally and the mental side is quite fidgety in my experience of being in the zone and being out of the zone. There were two big crashes I had during outdoors and the attitude that I had mentally was, “Screw this, I got a terrible start. I’m going to blow some doors off and go to the front right now!” because the best time to pass everyone is as the beginning. These were two first lap crashes that put me out for a little bit, and that is an attitude that gets praised and encouraged. It’s so tricky because when you have years of experience, you’ve heard it all. You’ve heard, “Oh, you’re cutting down too soon,” or you’ve heard, “You’re not coming down soon enough!” You’ve heard, “You’re just stuck behind the guy and you’re not changing your lines,” and you’ve heard, “You’re changing your lines too much! You don’t have an opportunity to pass him!” You’ve heard, “Man you’ve got to be aggressive on the first lap,” and you’ve heard, “You’re too aggressive trying to make it happen all at once, just be patient!” It’s be patient, be aggressive, be strong, make that pass on that guy, what the heck you stuffed him too hard. You just get so many mixed messages, in some ways it’s like I’m probably listening to too many people, and you just have those live in your memory. I just quoted 1000 things that I’ve heard 50 times each.

So, I think that’s a tricky thing. You know, every time you make a mistake, in some ways it might be a mistake that you made from listening to advice that you were given and it’s all a balance. Just balancing that is a challenge but what it is, is mentally I can’t be thinking, “Go to the front right now.” I’ve got to be thinking about what’s going on. The second one, that was a fluke deal. Yes, I was trying to go to the front with that mentally, but the guy cut over on me, I tried to miss him, now I’m on the brakes in the roughest part of the track and still almost hit the guy. It was just a mess. Bummer stuff, I’m not proud of it, but that’s where we’re at. I think that it’s like, “What do you do to stop crashing, right?” You get better, you make the bike stronger, you get more confident in your abilities, and you get to a place where your medium speed is top speed for everyone else. I think as a veteran now, maybe knowing when to balance pushing it or not to, being happy to take a second or third just to stay in the fight might be the ticket.

In terms of the mental side, I wanted to ask you about the way your year went because you got the win early in the season and couldn’t back it up after that, but you had some crashes. When you’re going through those struggles and you look back at the win, is it something where you can look at it as, “I can do it because I did do it,” and rely on that a bit?
You know, it’s crazy because if you look at my season and you just think of it a little bit different. I come out first round, kind of a little dark horse, second every practice, probably should have done really well that night like a top three. I made a stupid move, crashed, it was what it us. I had more fun than ever, won the heat race, go to Oakland and win another heat race, have a small crash and finish P4. Round three, first race without crashing, I win. Round four, great start, holeshot, I lead most of race, chose not to put [Christian] Craig over the berm, P2. That’s a great race and I got sick the night before. I was sick at that race and so maybe I didn’t have quite the stamina down the end or whatever and then I’m sick all the next week. I was away from the team, I’m isolated, isolation is never good for anyone. So, I get to Arizona and I’m sick. I ride press day fine and then first practice, I break my hand and don’t get X-rays. I race the day and have a couple other mishaps and lapses, but when you get on the track and you have a broken hand, it’s hard to have the same sharpness and mentality. But then, I’m still capable of going to the front and being a second and a half faster than the leader.

So, it’s so tricky and I think it’s moments like those where say you’re not sick and you keep the routine, and maybe you were a little bit closer at A2. Things are really going good right there, but you break your hand and now I’m off riding for two weeks and isolated. I’m away from the team, away from riding, and then A3 was not my best work but I got a podium with two crashes. I did a quad that nobody else did, cool stuff. First race back from the break, a little bit rusty, not my best heat race, but I was actually P1 in qualifying. Fastest in both 250 and 450 which is maybe my career highlight because I’m like, “That’s sick! Faster than the 450s, take that!”  And then that night, I put myself in a great position off the start, I pass Craig, and then my rear brake rotor gets bent. I had like a five second lead or something on lap two, but I didn’t know my rear brake rotor was bent. I like almost crashed before the whoops and lose a bunch of time. Say that doesn’t happen, my rear brake is not bent, and I win that race, who’s to say that momentum is not back on track? But instead, we just survived, get a rough third, and that should have been a win, you know? So, it’s things like that when they pile up. You can see how if you don’t get sick before A2, and the season goes a whole different direction. Craig had his stuff at Arizona and so it's like, who knows. When I start to think back, I’m like, “Wait I wasn’t all that far off. Wait this wasn’t all on me. I’m still the Michael Mosiman who’s very capable of winning and very capable of those things.” They happen and in some ways when things were good, we were like on a positive train, the team was on board, everything was nice, everyone was being positive, and then I get sick, break my hand, and have a rough race and we just threw the positivity thing out the window. I still had to race the next weekend healing up from a broken hand, it’s not easy you know what I mean! And that’s not well documented. These are the things that behind the scenes, people say, “Wow, Mosiman messes up all the time,” and they don’t see these things. I don’t know that I would do it any differently, but you learn from that. Practice better hygiene and try not to get sick! [laughs] But there’s so many variables. You have to be good, and you have to have some luck on your side.