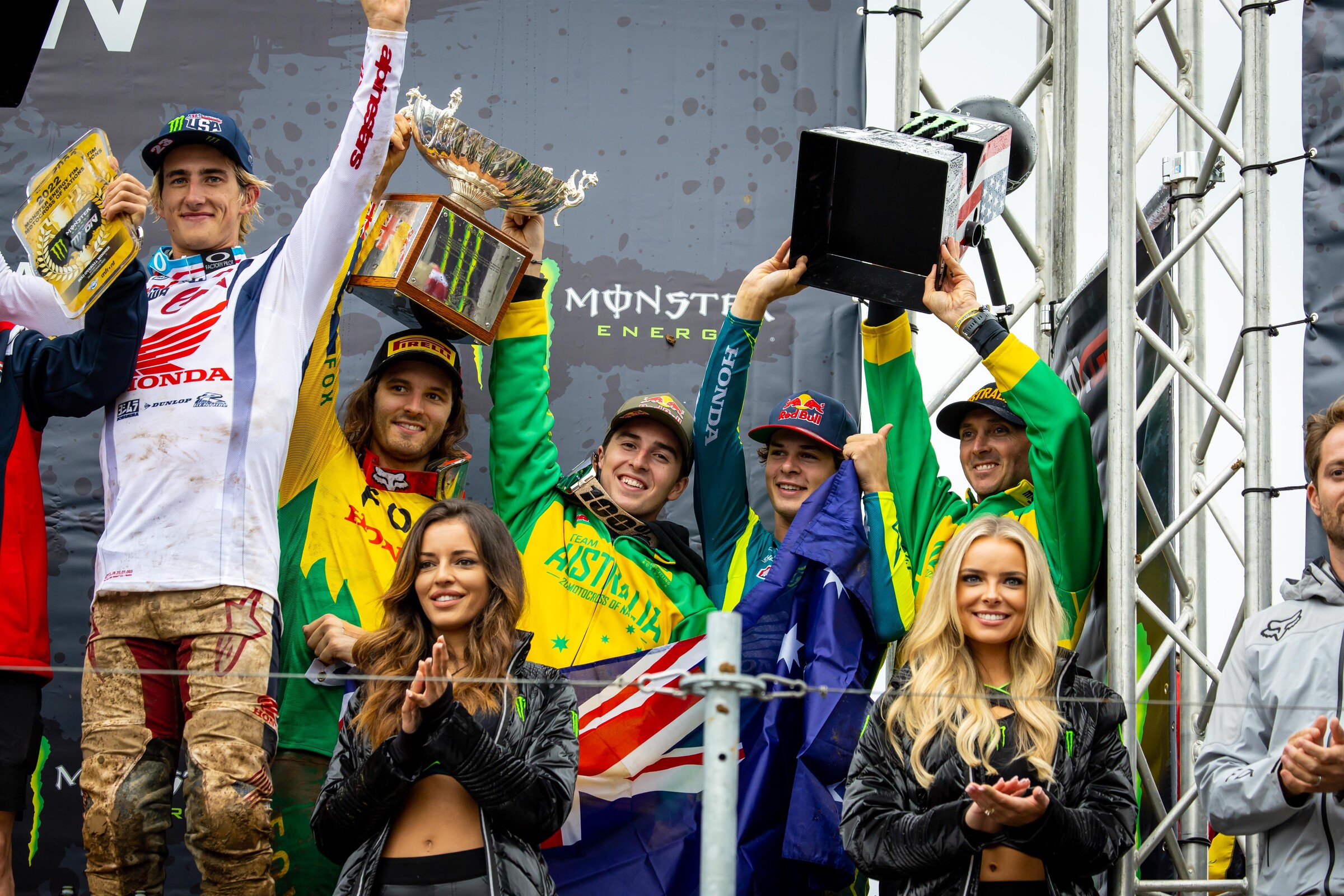 Team Australia found their way back onto the podium at the Motocross of Nations for the second time ever, but it was perhaps a day of missed opportunity as France was able to snag second away from the green and gold. Mitch Evans, Hunter Lawrence, and Jett Lawrence all impressed individually at times but some costly crashes from Evans and Hunter Lawrence ended up giving France the edge.

After the race and the team collecting their bronze metals, we caught up with team manager Michael Byrne and Hunter Lawrence himself to talk about the day and whether or not a win is in the cards for this team in the future.

Michael Byrne: It’s amazing, this is three young guys, and we haven’t had a young team like that since maybe 2003. To have these young guys, Jett’s first time and I think he proved he’ll be a force to be reckoned with. We couldn’t do it without the help of everyone from HRC and everyone over in Australia. I think the boys are a little disappointed I think they had more in the tank, and we’re already looking forward to France next year. Congrats to Team USA and France. We’ll be ready for those guys next year.

Hunter Lawrence: It was really good. We’ve had a few past years where we’ve entered the last moto somewhat in contention and close to the podium but not quite fortunate enough to pull it off. To do it this year is awesome. Then to do it with my brother, and of course Mitch, we go way back together. We’re excited for next year; we think we have some great years coming up. We like riding in France, and hopefully the French fans hear that and cheer for us. Yeah, that will be cool.

Racer X: Byrner, somehow Australia’s only been on the podium twice. You know how hard it is to get podiums at all. Are you happy with the podium or is it win or bust? How do you measure this?
Michael Byrne: I mean obviously we came to win. We had a team that was capable of that. These guys are still really young, and they’ve got a great future and many more Motocross of Nations to come. I know how hard it is though to try to stand on that piece of wood up there. I’m really proud of them. They fought and dug deep all day long. It didn’t come easy. So, we’ll see what happens next year.

Okay Hunter you were tasked with the 250. You did you job in Moto 1. You were the first 250 rider across. But all three of you guys said it was not easy, especially in these conditions. The 250 is an even bigger disadvantage.
Hunter Lawrence: You know, after warmup I was like, “I feel really good.” I put it P2 in combined times and I was like, “This track is sick. It’s good. It’s a little slippery. Horsepower is not too much of an issue.” Then it just kept raining and raining and I’m like, “It is what it is.” And then after the sight lap, I was like, “Shit, it’s deep out there.” And it was tough! No, but it was good though. We all rode well. Stoked for Byrner as well. He’s been doing it for a while. We’re definitely going to give him a win here soon in the next few years. So, I can’t wait for that day.

Was there a bit of strategy when it was muddy of, “Just don’t mess up as much as if we were going for outright pace and moto wins?”
Michael Byrne: Yeah, obviously with the rain this morning, we talked with the boys. Each guy having a single digit finish was… you’re in it for the win. Nobody is going to dominate in conditions like this. It’s not the way the mud works. So, obviously the great equalizer came this morning, and it was just a matter of let’s see if we can get everybody in the top 10 in each of their motos. Mitch [Evans] was up there at the start of that second one, I think he was fourth or fifth. He came together and then we had to count that 10th obviously. That was a tough fought 10th for Hunter because I think he had like three soil samples and still got a 10th. So, that was a hell of a ride. But yeah, that was really the strategy of just let’s see how consistent we can be because that’s what was going to get the job done today.

The last thing I was going to ask you, we were joking about the fans at Fox Raceway that we would hate you for the weekend. What was it like? What did it feel like? Did you have a normal crowd response? What was it like for you guys?
Hunter Lawrence: Yeah, I don’t know. I didn’t really know. Everyone was still stoked and happy to see us so that was cool. As far as on the track, there’s always noise so you’re just kind of like, “Yeah they’re cheering for me!” They’re probably not but who cares. It’s just what me and Jett think, and Mitch was probably the same. So, who knows.