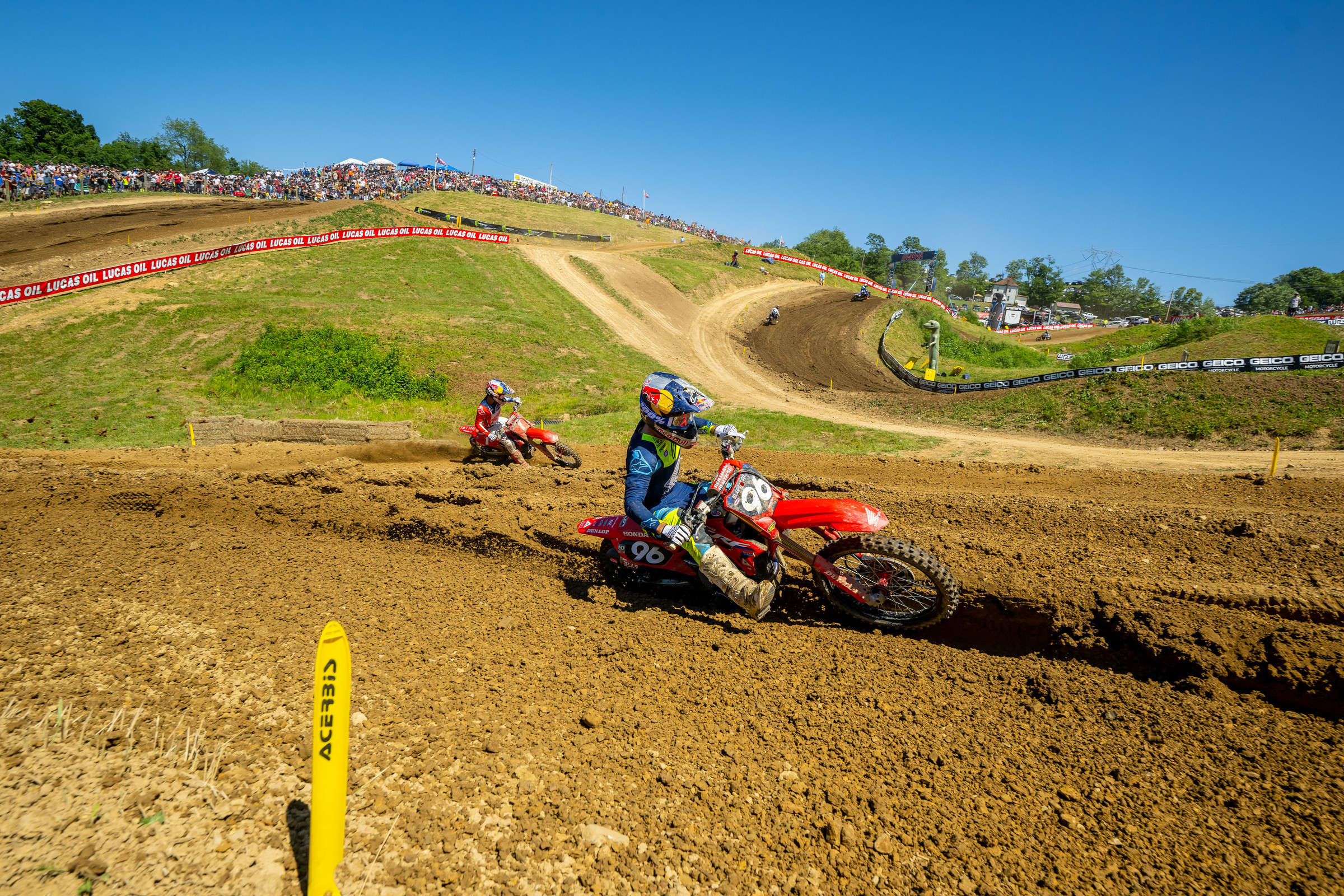 It seems with each passing round of the Lucas Oil Pro Motocross Championship the racing keeps getting better. This past weekend at High Point was no different, as there were unbelievable battles every single moto. The Lawrence brothers were on a completely different level the second 250 moto and put on a great show, all while gapping the rest of the field. Ryan Dungey shocked the world when he came out of retirement with a great ride at the opening round. After a lull through the next two races, he found himself back to battling for a podium position at High Point. Still there are some questions left unanswered; can Justin Cooper close the gap? Why does Eli Tomac gain so much speed in the second motos, and is Chase Sexton in it for the long haul? We fired off these questions to Jason Thomas and got his insight after High Point:

Talk about that fantastic Lawrence brothers' battle in moto two. What made the difference?
It was a perfect storm. High Point is one of Hunter Lawrence’s best tracks which helped the cause but they also both got great starts. These two ride together almost every day so they are very comfortable with that dynamic. Once they got in sync, they seemed to push each other to a level that no one else could touch. If they can work together like that more often, they could decimate the field regularly. I think Jett will be the more consistent of the two, but Hunter will have days like that again.

Can Justin Cooper close the gap on the Lawrences?
I think that he can, but it might not be an every weekend thing. Missing the entire spring is really apparent for JC32. He doesn’t look as comfortable with the top end of the race pace and also seems to be searching a bit for bike settings. If he can keep his head down and work on the little things, that deficit should be reduced as we move forward. He needs to nail his patented starts, though. Those were missing on Saturday. Cooper is not a “charge from behind” type rider. He is a “manage from the front” rider like Alessi, Emig, etc. His chance of success is tied to his position on that first lap much more than a rider like Hunter Lawrence.

On our podcast, we talked about a rider like Tomac pounding the roughest lines for as long as possible. Explain that theory.
Most riders look for the smooth lines on the parade lap. The motos are long and to push for 35 minutes, most riders understand that they will want to be as efficient as possible. That smooth line is often much further outside than the ideal route, though. That’s why it’s still smooth late in the day. For a rider like Tomac, he will often forego that efficiency for the lowest possible laptime. To reduce that time, he must traverse the nastiest line on the track which is usually the shortest distance from point A to point B. Most riders aren’t fit enough to handle that sort of abuse for an entire moto, nor do they even want to risk aggression in the roughest of lines. The best of the best, however, find a way to make those lines work and are strong enough to maintain it. Ricky Carmichael was the king of this, absolutely annihilating the roughest, shortest line for the first half of the moto. I have no doubt that he could have done it for 35 minutes, but he was typically so far ahead by then, he could switch to the smooth line and just cruise on home for another win.

Eli is much the same. When his bike is right, he's confident he can hit the hardest, roughest line and he won't get tired. When he's got it rolling like that, he's hard to stop on a rough track.

Were you surprised at Ryan Dungey's podium-level speed in moto two?
I loved the fight in him! His ability to push back against Roczen was enough to get even the most cynical of fans out of their chair. The last few weeks, he had been off the pace of the leaders and pushed back out of the top five. This move east may have sparked a higher level for the Dunge. Speaking with him after the race and Sunday morning, he was in such a good mood. It was cool to see him enjoying this most unlikely of returns. I have a feeling when we get to tracks he really excels on, we could be in for fireworks.

You seem to gain confidence in Chase Sexton's title chances each week. What are you seeing that's different this season?
I have been in “show me” mode on Sexton since Fox Raceway. He has simply given me too many reasons to expect mistakes. I know he’s fast. He might be the fastest rider on earth right now, full stop. But to win this title, he is going to have to match that speed with resilience and unrelenting consistency. He can't hand unearned points to Tomac. That recipe is certain to lose this title. Tomac will have his days where he deserves to win. Giving him any mercy on the other days simply can’t happen. Sexton handed a few points over in Colorado, but if he ends up being your champion, it will be because he was able to eliminate that tendency. There is no doubt that we are watching the “coming of age” for Chase Sexton, though. Whether it’s this year or next, Chase Sexton is going to be a champion in this class. I am certain of that.