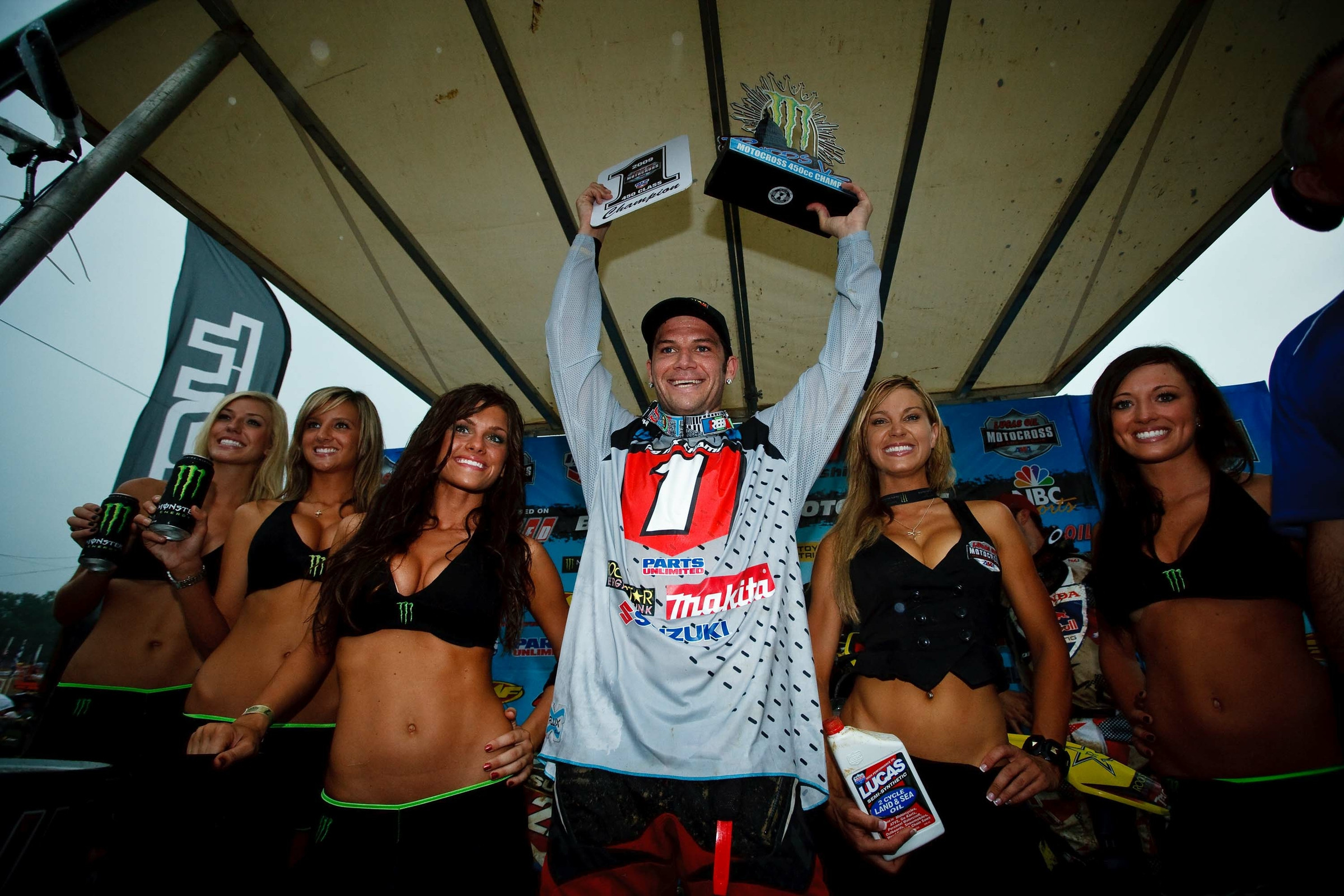 The MAVTV+ 50-Day Countdown to the 2022 Lucas Oil AMA Pro Motocross Championship arrives at 2009, a year with as much change as any during the 50-year run for this championship. The changes were only as deep as scheduling and appearance, though, because the champions were already well-established.

Most of these countdowns focus only on the riders and racing, but 2009 provides a good chance to explain how the Lucas Oil Pro Motocross Championship arrived where it is now. Up until 2008, the series’ commercial rights were held by the AMA, with individual promoters hosting each of the rounds. In the 1990s the promoters got together to create a loose grouping called the NPG, or National Promoters Group, but the AMA still ran the series. Then AMA President Rob Dingman announced the organization would like to exit the professional racing business and would sell its AMA Pro Racing properties. Several bidders attempted to get the rights for a variety of AMA racing disciplines, but ultimately the AMA sold the rights for all the series to Daytona Motorsports Group, owned by Jim France, of NASCAR’s founding France family.

Daytona Motorsports Group purchased control of several series as a package, but its main focus was AMA road racing. So, it contracted its other AMA Pro Racing series back out to established promoter groups, and in the case of AMA Motocross it selected MX Sports. MX Sports is a sister company to us here at Racer X and is known as the group that runs the AMA Amateur National Motocross Championship at Loretta Lynn’s. Through Daytona Motorsports Group, now known as AMA Pro Racing, MX Sports Pro Racing would operate the AMA Motocross Nationals.

This led to several changes for the new season. The biggest was taking the old two-day format of Saturday practice and Sunday racing and paring down to a supercross-like one-day format of Saturday racing only. Teams and riders had requested this one to ease travel concerns. Also, a big new TV package hit the series with help from Lucas Oil TV Productions and NBC, which offered live TV coverage of all the motos for the first time ever (in 2008, most of the motos aired a week after the races took place).

Also, with the Lucas Oil sponsorship came the name we now know: Lucas Oil AMA Pro Motocross Championship. And the class names from the previous few seasons, AMA Motocross and AMA Motocross Lites, were switched to 450 and 250.

As for who would win the races, there were some big shakeups because James Stewart, who dominated with a 24-0 season in 2008, wasn’t racing due to a supercross only contract with the San Manuel Yamaha team. Chad Reed, who rode for that team in ’08 and didn’t race outdoors, joined Rockstar Makita Suzuki. When Stewart and Reed met in supercross in ’09, they added somehow even more heat to their smoldering rivalry, with Stewart returning after missing most of ’08 supercross with a torn ACL, and Reed looking to beat his old Yamaha squad. The series was filled with crashes, collisions, drama and hurt feelings, but Stewart (who crashed out of the opener) came all the way back to edge Reed for the title by four points.

Reed was still feeling pretty good on the Suzuki, though, and while his original deal with the team was for only supercross, he negotiated a bonus-heavy structure to go motocross racing for the summer. Also on the gate was Ryan Villopoto, who had won three-straight 250 championships and had broken through to win two of the last three 450 supercross races while Reed and Stewart were battling. Also back was Mike Alessi, who crashed out of the ’08 season.

Villopoto fired first to win the opener at Glen Helen, but he tweaked an old knee injury before round two at Hangtown. He tried to race but the knee couldn’t go, and he was headed for ACL surgery and the end of his season. Alessi soon took control on his Suzuki and looked dominant, winning the next two races. Reed, meanwhile, wasn’t up to speed yet due to his late entry into the campaign.

It appeared finally that years of stubborn Alessi luck and drama were about to part, and the familiar #800 was in position to finally achieve that elusive professional championship. But before the High Point National, Mike came to the track early for press day and crashed, breaking his knee cap. Reed then won the High Point race, and the title picture changed completely.

Alessi tried to mount a comeback and race in Colorado just a few weeks after the knee injury, but his old rival Josh Grant put an end to that by putting him on the ground. Grant, riding for the new Joe Gibbs Racing Yamaha squad, was on it at mid-season, winning motos and overalls and providing a challenge for Reed, as was the Honda HRC duo of Ivan Tedesco and Andrew Short. Ultimately, Reed’s experience and speed proved too much, and the Australian, who had actually only won one national (in the 125 class, no less) before the ’09 season, took the 2009 Lucas Oil Pro Motocross 450 Championship. As Chad would say numerous times throughout the year, he was always pretty good outdoors, but he wasn’t going to win races against that Carmichael guy.

In the 250 class the battlelines were drawn between Suzuki’s Ryan Dungey, second in the 2008 250 MX series and the 2009 West Regional Champion in Supercross Lites, and Frenchman Christophe Pourcel, a former MX2 World Champion and the 2009 Eastern Regional Champion in Supercross Lites. Their battle did not disappoint, and they traded wins and the points lead all season long. Late in the year Pourcel stretched out a small gap, but then his Monster Energy Pro Circuit Kawasaki blew up at Southwick. Dungey had the break he needed to retake the advantage, while aggressive rookie Justin Barcia took his first professional win that day. Barcia had already made a splash by leading laps in his first pro race at the season-opening round, but he wasn’t quite strong enough to hold on to win that race. That’s not really a realistic goal, anyway, right?

Dungey held steady at the final race of the season at Steel City to take the 2009 250 National Championship. Suzuki had won both titles.

Since Reed is Australian, he wasn’t an option for Team USA for the FIM Motocross of Nations, so the squad moved Dungey up to a 450 and put Jake Weimer, who had won a few 250 Nationals, into the 250 slot. Veteran Ivan Tedesco took the Open/MX3 position. Dungey was pretty good in his first major 450 motocross race, but he couldn’t quite match Reed and the MX1 World Champion in the first moto, as those two veterans put on a show up ahead, with Cairoli winning it. Reed and Cairoli got wiped out in a first turn crash in their next moto, so Dungey and the Americans had the opening they needed to win the event. The streak was up to five-straight for Team USA.