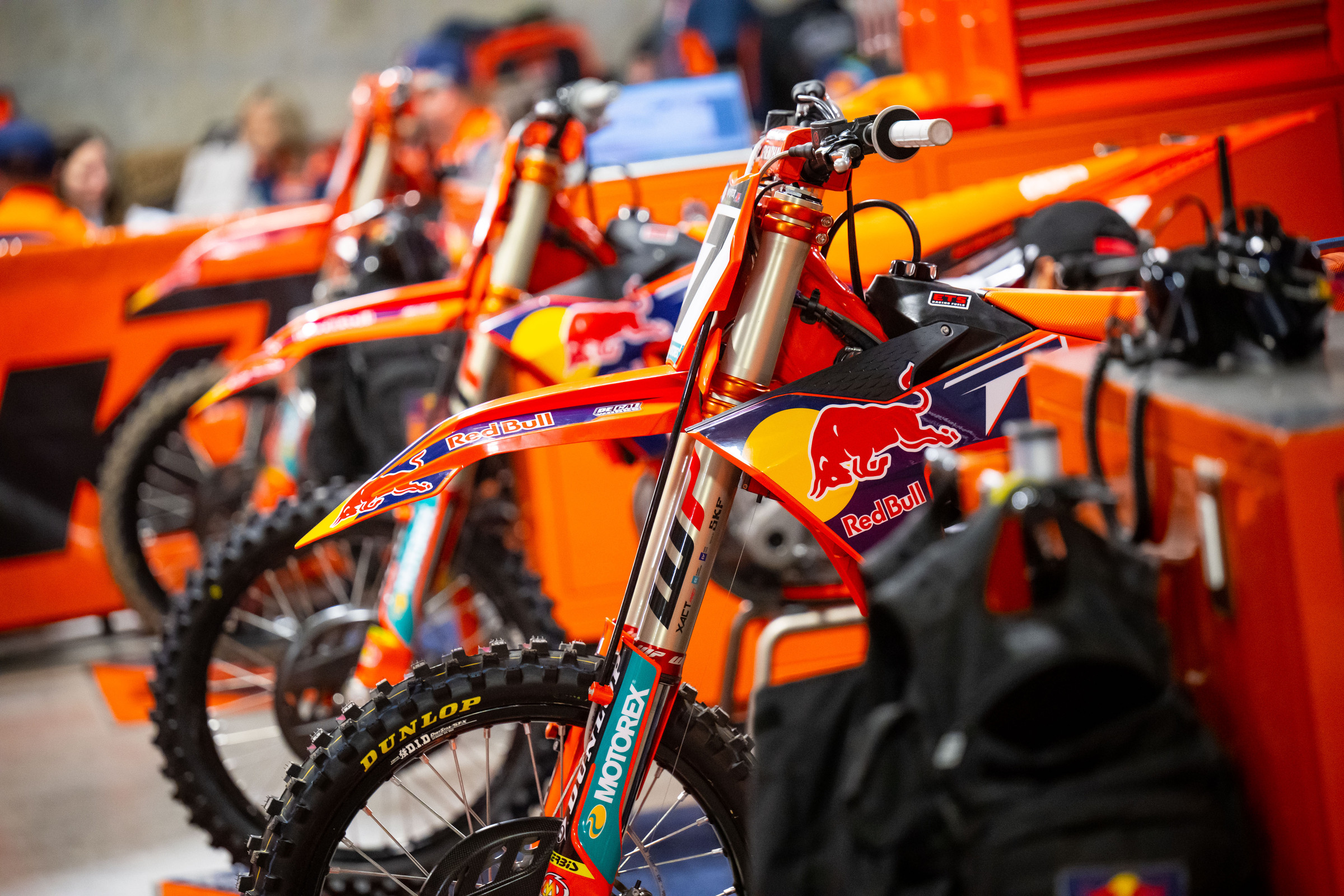 Via press release, KTM has confirmed its roster for the 2022 Lucas Oil AMA Pro Motocross Championship this summer. The DMXS Radio boys got the inside scoop on Cooper Webb sitting out Pro Motocross mid-way through this week and in a statement today, KTM confirmed that the North Carolina native will not compete in Pro Motocross. Although his contract is up with the Austrian brand at the end of the AMA year, the two-time 450SX Champion is expected to return to the team for both Monster Energy AMA Supercross and Pro Motocross in 2023. Webb joined the team in 2019 and if he returns in 2023 it would mark his fifth consecutive year with the team.

Aaron Plessinger, who suffered a broken arm in February and was sidelined since, is fully healed heading into his first Pro Motocross season aboard the orange machine.

Max Vohland, the team’s sole 250 rider, suffered a broken collarbone in the first 250SX East Region main event of the season and then suffered a thumb injury ahead of the Foxborough Supercross. Rumors were that the factory KTM team was looking for a second rider along with Vohland and several names came up, including Marvin Musquin—who is about to complete a one-year supercross-only deal with the team. Reports were that Musquin been offered to ride the 250 Class, but that does not appear to be the case as his name was omitted from the press release, making Vohland the sole 250 rider. Musquin said after the Denver Supercross he is working towards a contract for the 2023 supercross season.

The team also announced recently Ryan Dungey and Antonio Cairoli will be competing in the first two rounds (although if things go well, we could see them continue to lineup in the following rounds as well).

Jeffrey Herlings' name is also omitted from the release because KTM announced earlier this week that the defending FIM Motocross World Champion would be undergoing a pair of surgeries on his feet in order to heal properly for the 2023 MXGP title fight.

On Thursday we rounded up some other news on Webb, Ken Roczen (racing this summer), Dylan Ferrandis (looking to defend #1 plate), Adam Cianciarulo, Joey Savatgy, Shane McElrath, and Max Anstie ahead of the May 28 opening round—so check that post out if you missed it.

The following press release is from KTM:

MURRIETA, California—The Red Bull KTM Factory Racing team is ready to take on the 50th Anniversary of the AMA Pro Motocross Championship with the much-anticipated return of team riders Aaron Plessinger and Max Vohland for the summer. The 12-round series kicks off later this month in Pala, California, where multi-time World MX Champion Tony Cairoli and nine-time AMA Supercross and Motocross Champion, Ryan Dungey, are slated to race alongside the Red Bull KTM teammates at the opening rounds.

Hungry for outdoor success after missing the last half of the supercross series with a broken arm, Plessinger is healed up and ready to contest this year’s 450MX Championship. Equipped with the new KTM 450 SX-F Factory Edition, in which he claimed a runner-up finish at this year’s Oakland SX, Plessinger is focused on returning to the line with a bang as he looks to add to the 250MX title he won back in 2018.

Also returning to the lineup following a series-ending injury in supercross, Red Bull KTM’s Max Vohland will enter his second full season in the 250MX class aboard the KTM 250 SX-F Factory Edition. Finishing inside the top-10 during his rookie year in 2021, Vohland will set out for progression this season as he aims to battle up front at all 12 rounds.

Red Bull KTM has confirmed that team rider Cooper Webb will not be lining up for the AMA Pro Motocross Championship in 2022. The two-time 450SX Champion will shift focus toward welcoming a new addition to his family this summer, before getting back to work in preparation for a third-career title fight in the 2023 AMA Supercross Championship.