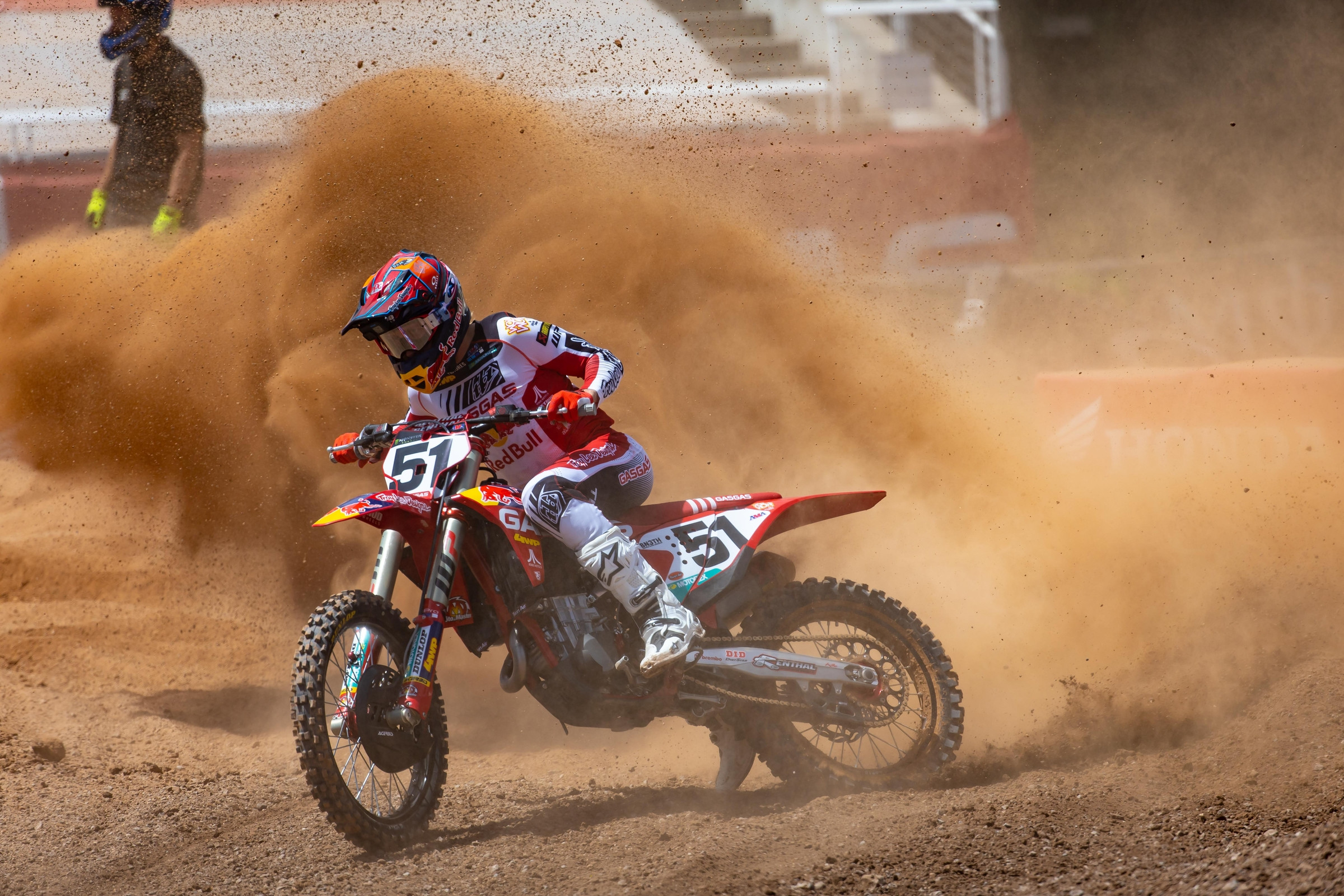 It sounds weird to say, but Jason Anderson has had the best 450SX season of his entire life, including 2018, when he won the championship. Okay, so nothing tops winning the title, but in terms of how he’s been riding and his win count, 2022 has been his best year in supercross. He’s got a chance to get one more too, and if he does, he’ll tie Tomac for number of wins this season (7) and make it four in a row. Who thinks Anderson’s rampage continues in Utah? –Hansel

For Justin Barcia and Malcolm Stewart, this weekend is the last chance for both to notch a win. If Barcia doesn’t get it done it’ll be his first season since 2018 in which he didn’t get one. For Stewart, a win would mark his first ever in the 450SX Class. In last week’s post-race press conference Stewart remarked that a win was indeed very important to him, but also pointed out how important consistency is, and that he wants to make sure he hangs onto third in points. Right now, he has four points on Barcia, which is far from comfortable. Will either of these riders light the candles this weekend, and which one will end up in third overall? –Hansel

Going Out on Top?

As of now, Marvin Musquin doesn’t have a deal lined up for 2023. He mentioned last week that he was in talks and has a desire to keep racing, but nothing is certain. He also isn’t racing the Nationals, so him getting a deal is heavily dependent on his supercross performance. Well, he’s been great lately, and what better way to boost your stock than to win the last race of the season? He also has 287 points, which means he could easily play spoiler in the battle fort third overall mentioned above. No matter what happens, keep an eye on Musquin this weekend—it’s possible it might just be the last time we see him race. –Hansel

After logging results in three different decades, tomorrow will mark the last Monster Energy AMA Supercross race for the venerable Justin Brayton. It’s wild to think a rider who’s so solid, and capable of putting it in the top ten on any given night, would be calling it quits, but then again, Brayton’s been on this ride as a professional since 2002, which means a good portion of the 250SX riders who race on the same night weren’t even born when Brayton’s career started. If you’re in SLC, be sure to make some extra noise for Brayton, it’s the last chance you’ll have. –Hansel

If you were watching the 450SX LCQ last week you saw Justin Rodbell come in hot and completely clean Cade Clason out on the first lap. The move was a little puzzling, seeing as how they hadn’t even completed a single lap yet, but hey, the LCQ can be a battle zone sometimes! Afterward Clason, how shall we say, was less than pleased about it, and understandably so. Can we expect Clason to return the favor in SLC if he gets the chance? –Hansel

We could try to hype up this 250SX class battle between Hunter Lawrence and Christian Craig, but it’d be like trying to inflate a slashed tire that's missing a valve stem. With an 18-point lead over Lawrence, there just isn’t much drama for Craig navigate. All Craig needs are eight points, meaning If Lawrence wins, a 15th or better gets the job for Craig. If Lawrence gets second, all Craig needs is eighteenth. If Lawrence gets third, Craig can take 21st and still secure the title. We could keep going with this but c’mon, Craig hasn’t finished off the box all year, even with crashes. Even if he just puts it in cruise mode, which he should and probably will, he won’t have a problem getting fifteenth. Expect Craig to join the championship club this Saturday. –Hansel

The drama of east vs. west is a little subdued this year, as one of the west’s brightest stars, Craig, will likely opt to pump the brakes on his shine in Salt Lake City. He’s still got a title to worry about and winning the Showdown is secondary to that. There is, however, still plenty of talent to watch. The Brothers Lawrence, Hunter and Jett, will be going for it, Austin Forkner, who’s fresh off a win in Foxborough will be fast, and Michael Mosiman, who was second in Denver, could also play a factor. Add in the rest of the 250SX hot shoes and we could have ourselves quite a melee in Rice-Eccles Stadium. –Hansel

Twisted Tea/HEP Suzuki’s Brandon Hartranft has arguably been the biggest turnaround rider of the year. After a rough rookie 450SX season last year, Hartranft has been consistently putting in solid results and had found his way up to eighth in the 450SX standings. He could still be passed by Justin Brayton in points at the finale if things don’t go his way, but to even be top 10 in points this year is a huge leap for the New Jersey native. Look for Hartranft to try to close this season off with yet another strong results as he looks to maintain P8 in the championship. –Kellen Brauer

After clinching his second Monster Energy AMA Supercross title last week, Eli Tomac has elected to sit out the final round of the season this weekend as he nurses a knee injury he sustained in Atlanta. The question now is whether this injury will affect Tomac’s chances to compete in Lucas Oil Pro Motocross this summer. Tomac went on the PulpMX Show this week and explained that he should be good to go as long as he doesn’t reaggravate the injury from now until the opening round in three weeks. For now, though, Tomac will not line up tonight leaving the door open for someone else to go out with the win. –Brauer

The weather in Salt Lake City is going to be awesome today as we should see weather in the 60–70-degree range with the sun coming out in the afternoon. However, if yesterday was any indication, the track will dry out quickly and likely be a bit of a dustbowl throughout different stages of the day. There’s also a sand section that was kicking up a lot of dust yesterday too so expect to see some slick hard-packed conditions and some sand covered riders in Salt Lake City. –Brauer