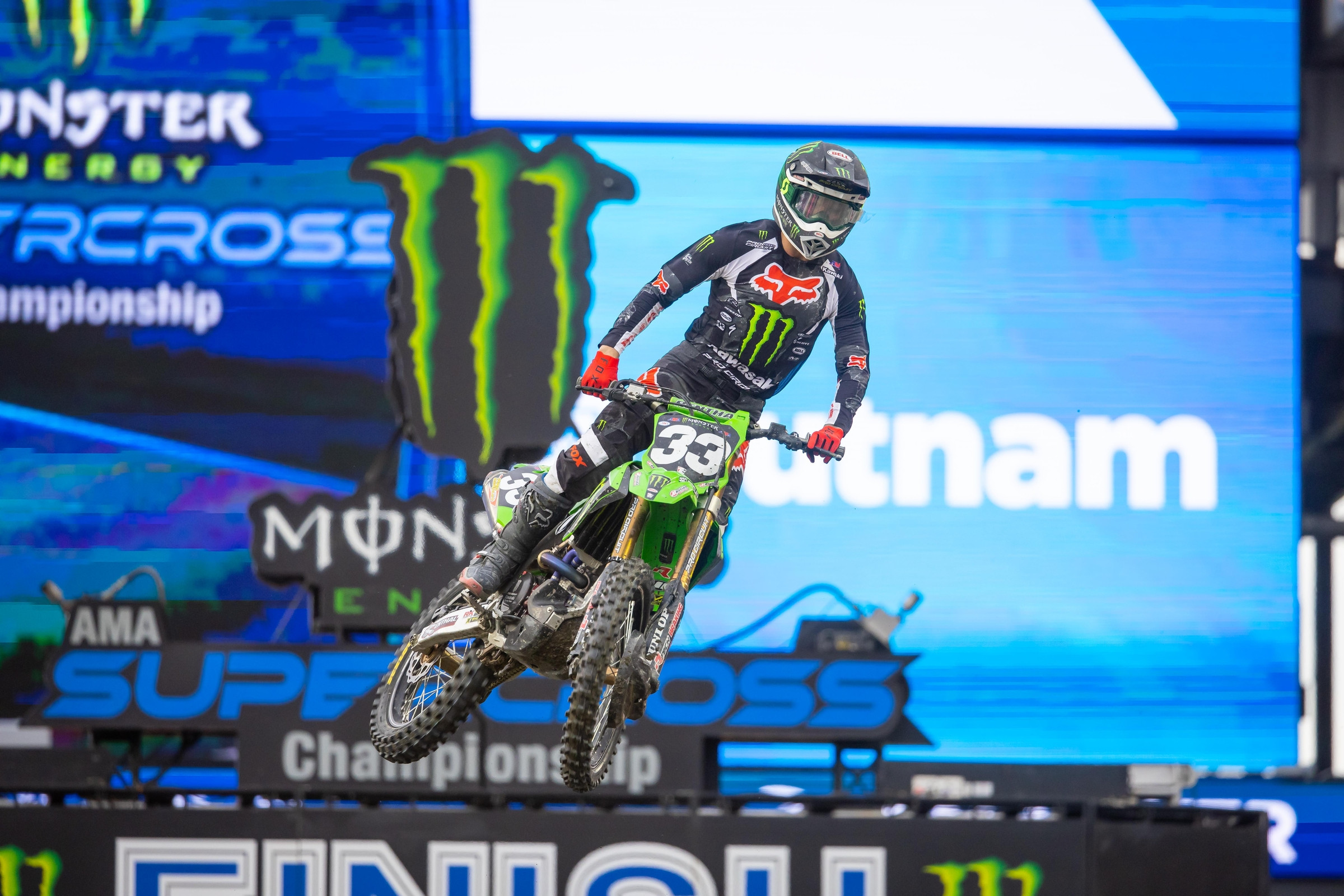 Austin Forkner wears his heart, and his racing emotions, on his Fox Racing jersey sleeve. Haunted by a series of injuries throughout the past two racing seasons that have added up to idleness and frustration, the Monster Energy Pro Circuit Kawasaki racer has refused to give up, finding his way back into action and throwing himself into the fray. Last Saturday’s triumph at Foxborough was a classic example of the Missouri rider’s approach as he returned to action after attending to a broken collarbone suffered at Arlington, Texas in February. After scoring a heat race win in his return to action in Atlanta, at the next race in Foxborough, he actually went out and scored the main event win after a torrid battle with new 250SX East Region Supercross class champion Jett Lawrence. With last weekend off and with a bit of time on his hands, Forkner tuned-in to watch the Monster Energy Supercross round at Denver, Colorado. Intrigued to see just what would play out in the Mile High City, Forkner also wanted to begin mentally preparing for this Saturday’s Dave Coombs Sr. East/West Showdown race set for Rice-Eccles Stadium and 4,600 feet of altitude, as well as the opening round of the 2022 Lucas Oil Pro Motocross Championship scheduled for Fox Raceway at Pala in Southern California on May 28, 2022. Pointed and unabashed when it comes to all things professional motocross and supercross racing, Forkner was in a talking mood when we tracked him down and we were absolutely fine with that!

Racer X: Okay Austin. I know you watched the Denver race from Empower Field at Mile High on Saturday. What did you think? What does a world class racer such as yourself actually see and think when they actually watch a Monster Energy Supercross race on television?
Austin Forkner: Yeah, yeah. I mean I definitely find myself putting myself in the position of the guys racing on TV. I put myself in their positions a lot. It’s almost like I can somewhat simulate the nerves that they feel. It’s kind of odd. I don’t know… It’s like whenever I watch the races on TV it’s almost like I get nervous. I guess I kind of put myself in that position when I watch the races on TV. That’s definitely what I notice when I watch the races on TV like I did on Saturday. I guess unconsciously I kind of just put myself out there in that position on the racetrack.

That doesn’t really surprise me. I’ve known you since your mini cycle racing days and you’ve just always struck me as a racer. When you race you push and you fight and, like you said, you truly do put yourself out there.
Yeah, I feel like, especially the past couple of years, that I’ve been put through the wringer a little bit. I’ve had to grow just a little bit more just as far as just being mentally tougher, you know? I’ve had to basically get mentally tougher. It’s not like I wasn’t already pretty mentally strong. It’s just like how you think about things. I have always thought I could handle a lot, but then you kind of get put through the wringer and it kind of changes you a little bit. It’s just different things too. There’s an injury side to it. There’s also a side of like last year where I just basically got my ass handed to me. I’ve kind of dealt with different things like mental struggle-type things and it has all just made me tougher. When you get put in situations like that there are only really two ways of coming out of it. You either man-up and come out stronger, or you just give in. I’m not saying it was easy going. There were times when I was like, 'Damn! Do I really want to do this?' And that happens to a lot of people. You just stick to it. I got another win last weekend, so I guess it paid off-

You started the race outside of the top 10 and absolutely fought hard for and earned that Foxborough win. A special victory for you?
Yeah, I felt really good about that win. Whenever you go as long as I guess I have without winning, it is tough. There are guys that are racers and there are guys who are practice guys. I always grew up as a racer. Often times I would not set the world on fire in practice, but when the gate dropped, I came out swinging. And missing as many races as I have over the past couple of years, you start to just lose the nerves and everything else that comes with racing. The crowd, the pressure, the nerves you feel on the starting line, making decisions in the moment on the track. All of that stuff is what separates racers from the practice guys. I felt like I’ve had an advantage over other people with this my whole career. Like, when the gate drops, I somehow figure out a way to do it better than a lot of other people. With me missing as much racing as I have, I feel like I’ve lost a little bit of that and it kind of makes you wonder like, 'Man, I’ve missed this much racing. Am I still a racer? Am I a practice guy now because I’ve done a lot of practicing, but I haven’t done any racing?' Those things start to make you think. It’s sort of like, 'Man, do I still have what it takes to win races? Am I still a racer or am I starting to turn into a practice guy because of a lack of racing?' That Foxborough win felt really good to show myself that, yes, I can still win races. Like you said, I handled the pressure from Jett the whole race and won. That felt pretty good. It felt good even as just a confidence booster.

How pumped was Mitch Payton with your win? I’d read in recent media that he really, really wanted another win before the curtain dropped on the 2022 Monster Energy Supercross season.
Yeah, at film last week after Atlanta, Mitch was like, ‘Man, guys, we need a win! We need another win before the end of the season.’ Right after Foxborough I said to him, ‘Dude, all you had to do was ask!’ Yeah, obviously I wanted to win one. I wanted to get up there and I wanted to battle with those guys. Whether that meant a win or whether that meant a podium finish, I wanted to be back where I left off. Where I left off, I believe was with me being a podium guy in pretty much every race and also a winner at races. That’s where I wanted to come back and be and that’s pretty much where I came back and was. I was right there, and I had some fire and some motivation from just being off of the bike. I was missing races, and I wasn’t happy about that, so I wanted to finish the season good. It took a little convincing with the team. I was like, ‘Is there a chance I can come back for supercross and get hurt and be out for outdoors?’ Yeah, there is always a chance, but I can trip walking out my front door and land face first into the concrete. There are chances with everything you do. For me, I’m like, ‘I’m healthy and I’m motivated. Let me go race.’ Obviously, whatever I said to the team worked You know I’m really good at supercross and I want to race more of it. I think I came back with a lot more motivation and a lot more drive than other people thought that I did. A race like Foxborough was where I expected to go this season. Maybe I didn’t show that in the first couple of races this season, but I was just trying to start the season off smooth and consistent and as I got more and more comfortable, I started pushing my way to the front and not just taking what races gave me.

How are you looking at the season-ending Salt Lake City round this coming Saturday? That could be a good race for you, huh?
Yeah, I feel solid. The win two weeks ago has obviously given me a lot of confidence going into it and showed me that I can run up front with those guys. A start there will definitely be more crucial for this race because there will be more fast guys and it will be harder coming through the pack. The start will be more important at this next one, but I’m ready. I want to get up there and I want to race, and I want to end the season out with another podium or, hopefully, a win. I know I can now at this point. Foxborough was a good race to put me in that mindset.

How about the rapidly approaching outdoor series? That can potentially be a very good race series for you.
Yeah, I hope so. That kind of was part of my thought process of coming back to racing supercross. I’m good at supercross and I love racing it, but in coming back and racing it this season, I felt like it gave me a better chance going into the outdoors with some confidence and coming in fresh off of racing. I don’t have to get back to race flow. I’m already ready and I’m hoping to have a good outdoor season, as well.