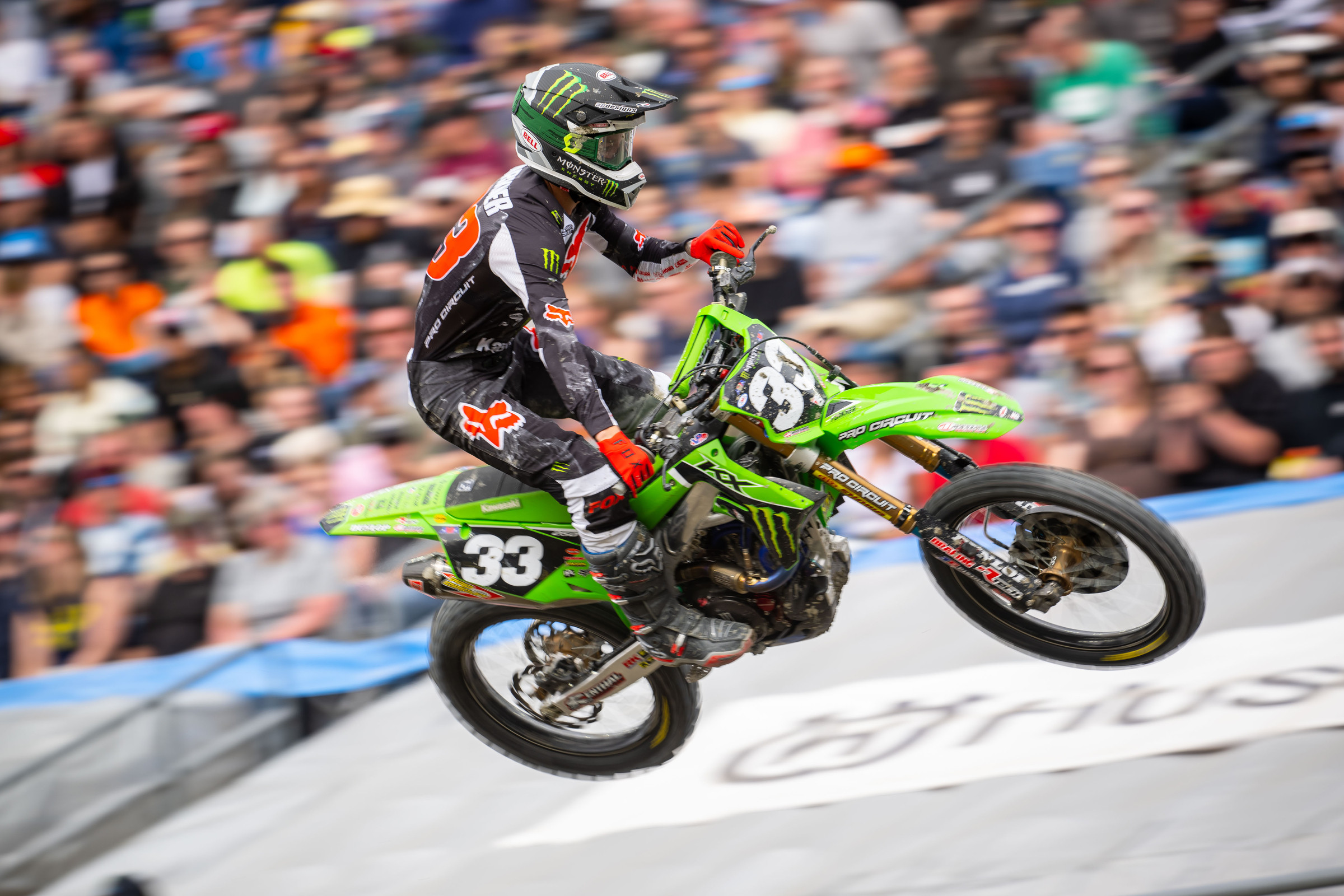 With his second-place finish, Australian Jett Lawrence clinched the 2022 250SX East Region Championship with one round to go. The #18 picked up his eighth podium of 2022—11th consecutive supercross podium finish including the final three rounds of 2021. The 2021 Lucas Oil 250 Class Pro Motocross Champion also adds the 2022 250SX East Region title to his resume. As I touched on last week, Jett was on the podium at every round of the first seven races and coupled with his four main event wins and a worst finish of third (two times), he celebrated with the Honda HRC squad one round early. Congrats, champ!

He still has it! Austin Forkner broke out for his first win since the 2020 SLC 7 races to finish the season. The Monster Energy/Pro Circuit Kawasaki rider’s win came nearly two years after his last win at the Salt Lake City 5 Supercross round on June 14, 2020: exactly 1 year, 10 months, 9 days—and a few injuries—ago. After 678 days, he proved he is still capable of winning races. More on Forkner in a minute.

Eli Tomac’s seventh place finish was only his third main event outside the top five in 2022. Last week we mentioned his 11 podiums this season, and he has one fourth place finish (round two in Oakland) and his three non-top five finishes are sixth (round one Anaheim 1 and seventh round in Minneapolis) and seventh (Foxborough). Also, something interesting to note: in Tomac’s title season in 2020, he finished 7-4-1-2 in the first four main events. In 2022, Tomac started 6-4-2-1 in his first four main events. It looks like, barring any extreme issues, Tomac will clinch the title this weekend in his home state.

Malcolm Stewart had eight top-five 450SX main event finishes entering this year (three in 2020 then five in 2021). Through the 15 rounds of 2022, Stewart has 11 top-five finishes. Can he pick up that maiden main event win in one of the final two rounds?

Cooper Webb finished sixth in the main event, continuing his longest win-less drought (15 rounds since his last win) since his maiden 450SX win in 2019.

The American Motorcyclist Association (AMA) has posted its post-race penalty report from round 15: there were not infractions in the 250SX Class, but there were two that resulted in fines in the 450SX Class. Malcolm Stewart was penalized for section 4.19.b (450SX Supercross Staging - Standard Format) and Eli Tomac was penalized for section 4.26.l.1 (Race Finishes) of the rulebook. Here are the specific rules in those sections, directly from the 2022 AMA Supercross Rulebook:

1. The only exception to this rule will be when a motorcycle fails to start and an attempt is made to push start the motorcycle. The motorcycle must be under visual control of an official at all times during this process.

b. Riders or crewmembers observed to be relieving themselves anywhere other than in a fixed or portable restroom will be fined a minimum of $1,000.

l. At the conclusion of the Main Event, the top five finishing riders and their motorcycles must go directly to a staging area located at the podium. Other riders outside of the top five may also be directed to the podium staging area.

1. Failure to go to the designated podium staging area will result in a $1,000 fine. Further infractions of this rule will result in an increased fine at Race Direction’s discretion.

No doubt the TV crew wanted to interview Tomac after the race but he didn't stop, hence the fine. When NBC's Daniel Blair went to the pits to find him, he only ended up taking to Eli's father John.

Although still sidelined with a shoulder injury, Jerry Robin and his crew had a New England Patriots kit set up for their “sport series” gear at the home of the Pats in Massachusetts.

“We did a lot of testing with the team this week, and I feel like my whole bike setup was definitely in the right direction. This race was an early one, so it's always kind of different. In the Main Event, I started terribly and I kind of got pushed out wide and made a few mistakes. Marvin and I were kind of playing yo-yo and lapped riders on the track really came into play toward the end of the race. He got a little ahead of me, and I pretty much rode a quiet fourth.”

“It was a pretty good day. I was feeling good after practice, I made a few little changes and was comfortable on the bike. I didn't really feel that great in the heat race; I didn’t get the best start and ended up fourth. In the Main Event, I came out of the gate okay but I rode a little tight in the beginning. I was able to put a really strong charge at the end, but I was only able to come back to fifth. We are looking for some fire going into Denver!”

“Today was a bit of a tough day. In the heat race, I got a great start with a holeshot but my exhaust ended up falling off. I got another holeshot in the Main Event, which is really awesome, and I was able to lead a few laps and then got shuffled back pretty quickly and really just struggled after that. I kind of struggled with the track conditions all day but we left healthy and am looking forward to the last two.

"It was a pretty smooth day for me. I qualified tenth overall. The track was pretty gnarly, it was like sawdust out there. The dirt kept deteriorating throughout the day. It was especially bad on the jump faces. In the main event I had a great start and then going into the right hander another rider just didn't turn. He pushed me off the track. I was off the track for two straightaways before I could safely re-enter. I went from fifth on the start to way back. I rode a solid main, not the best and not the worst, and I ended up eleventh overall. So thank you to the team for believing in me and working hard and I'm going to do the same back."

"It was not the best weekend in Foxborough. I'm glad to get out of here healthy so I can finish out the next few weeks strong."

"It's always a unique experience racing in Gillette Stadium. It was even better with the team hosting corporate staff from our partner, Twisted Tea. It was great to have so many of their team turn out and experience supercross. In terms of on the track, it wasn’t our best showing. We struggled most of the day, but we have a solid plan to put this race behind us going forward. Brandon is up to ninth in points and that’s a great accomplishment going into the final rounds."

“Man, I had a really tough day. I had good starts again. In the heat race, I crashed right off the start when someone hit me and went to the LCQ. I got some more laps in the LCQ and felt really good in the Main Event. We were clicking them off. I definitely had a shot at that win, and had good speed to do it, but just happened to come together with Pierce with about four or five to go and kind of threw it away tonight. I was happy with the riding in the Main Event.”

"Today was tough. I struggled with pace all day. I'm happy to come out healthy and ready for the next one in Salt Lake City."