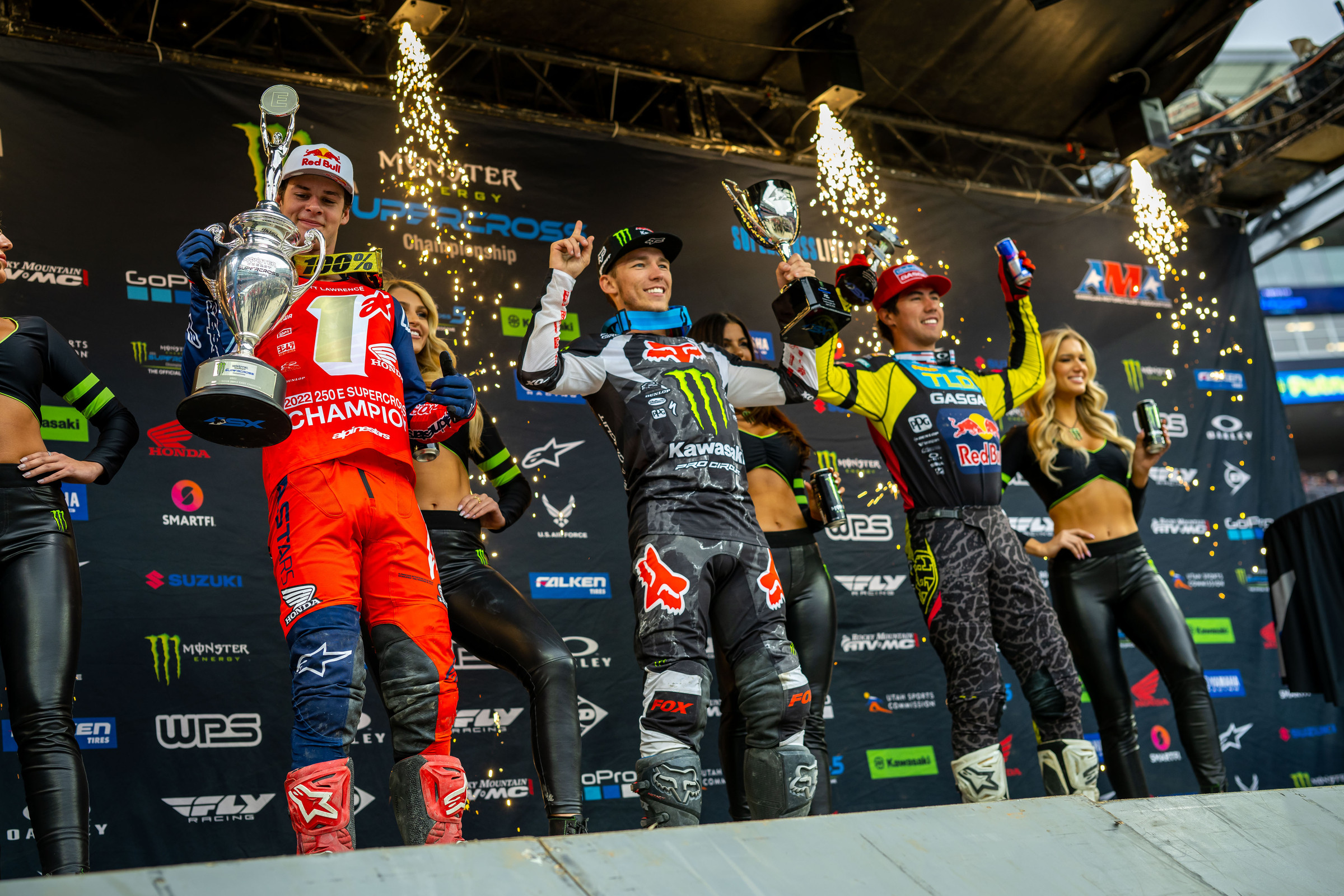 With just three rounds to go in the Monster Energy AMA Supercross series, we returned to Foxborough Massachusetts this past weekend for the first time since 2018. The track this week was interesting. I went to press day and it was confirmed this was the same dirt they used in 2018 but to me, it looked rockier for some reason? The rocks were bad! The jumps and the transitions were all pretty good, everyone thought that part of the track was cool, but the grey moon dirt made things interesting. I think the guys at Dirt Wurx really need to sift these rocks out, it was a little much for sure.

Speaking of 2018, this is what happened the last time we were in Foxborough…

Yeah! Marv went leopard seal on Eli Tomac. That was nutty. I don’t know if we’ve ever seen that from him before or since.

I thought I’d take a look at some of the stats from this race and from the series in general that interest me and break them down. Tip of the visor to @ThreeLapsDown for this stuff.

As in the number of wins for Jason Anderson at Kawasaki this year. And two in a row at that. No one would’ve said much if Anderson had kind of mailed it in after he KO’d himself there a few races back and if he had, it STILL would’ve been a successful season for him. But he’s rebounded with two nice wins in a row, and he pulled back out on Chase Sexton late in the race to secure this win. Really incredible season for him and after Eli Tomac’s success this year and some low-key shade thrown at Kawi by the Tomacs this year, I think Kawasaki and the team needed this. They took Jason to an even higher level, including his SX title year. Someone close to the team told me they had one perception of Jason before he joined the team and it wasn’t a great perception, I’m guessing, but since joining the team, this person said they couldn’t have been more wrong. He’s a hard worker, he’s a good tester, and he fits in very well with the green guys.

The number of outdoor motocross wins Anderson has in his career and I’m here to say that will reach at least one this summer, maybe more.

As in Jett Lawrence has two pro titles in his first 2.5 seasons of racing. Does anyone want to bet against him defending the 250MX title this summer? “The Donut Guy,” as J-Mart [Jeremy Martin] likes to call him, won his first 250SX title in a really dominating fashion and the 18-year old’s future is so bright, he’s got to wear shades. Shout out to Timbuk Three for that timely reference. Jett made this a tad more interesting with crashes and bad starts, but he’s passed 36 riders this year in eight races and did it with ease. He was the real deal and will continue to be.

Number of career 250SX wins for Austin Forkner, including the one this past weekend. Great riding all day long, he was very fast every time he hit the track, and finally, Mitch Payton has something to celebrate this year. It was looking like a long season for Payton but with Forkner, he’s got a dude who can win the showdown in a couple of weeks also. He’s that good. Also, this has to feel good for Forkner. He hadn’t won a race in almost two years and also, he’s the career leader in 250SX wins (he’s fourth all time in 125/250SX wins BTW) without getting a title. That’s not really a title you want to hold.

Number of holeshots Eli Tomac has on the year. Foxborough didn’t go well at all—it was a borderline “Weirdo Eli” race, so we’ll move on from there. It was so bad he didn’t stop to give an interview after the main and got fined by the AMA for it. We’ll just talk about how he’s going to clinch in front of his home state fans and nothing says more about Eli’s improved season than him getting four holeshots this year and an average first lap position of 5.1, which is third best in the class. That’s always been something of a bugaboo for him, not necessarily the start but also the first lap timidness. Tomac’s been amazing this year and I predict he’ll pick back up in Denver this weekend.

Number of average points per race for Marvin Musquin of the Red Bull KTM team. Plus, he’s got that win and also four out of the last five races have seen him on the podium. Really solid season for Marv and he’s 22 points ahead of his teammate Cooper Webb as well. What’s that you say? Webb’s missed a race and has been banged up a bit? Okay, I’ll give you that, but Marv’s got more points per race than Coop, more overall points, a better qualifying position and also, the most important stat: one more win. I’m not saying all this to shit on Coop but to point out that Marv has been by far better than the brass at Red Bull KTM thought he would be when they basically gave him a take or leave it low ball offer for 2022.

Position in points for Enzo Lopes of the Club MX team after a come-from-the-back ride at Foxborough that got him a seventh. I help out Lopes a bit with some money and he runs a PulpMX sticker so I’m a bit distraught, as one of the members of “Team Lopes,” that I don’t know what he’s talking about when he put out that he’s got an arm issue that’s been bugging him. He should be keeping his partners and investors in the loop. Either way, “we” will get to the bottom of this. He’s 12 back for third overall in the series and yeah, I don’t think he’ll jump Freckle or Brown in the points without some luck but to me, fifth is a very good finish for a rider riding for free this year.

The number of spots Cooper Webb lost in Foxboro. He holeshot and led for four laps and yeah, it’s not been a great season for Coop so I didn’t think he would win, but at least end up on the podium? Sure, why not? But yeah, Foxborough didn’t work well for him, he wasn’t good in the whoops at all, and ended up with a sixth. He’s not a guy to make excuses so it is what it is for him and Red Bull KTM, but this is weird. I’m sure the frustration level for Webb might be all-time high for him. Well, maybe not compared to his Yamaha days, but still.

Lap led for Phoenix Honda rider Cullin Park this year after Foxborough. Yeah, that’s right! Good for the privateer and first-year SX rider to do that, it’s got to be pretty cool for him, the team, and Dean Baker, the horsepower maker over there at Phoenix Honda. Park’s a bigger dude also so one wouldn’t think starts would be his forte but at Foxborough, they certainly were!

Fastest qualifier spots for Malcolm Stewart this year, tops in the 450 class. He rode well in Foxborough to come up from the back to a fourth and you have to figure he’s not practicing much since he hurt his knee a few weeks back. The five pole positions are great, but did you also know that Stewart has zero fast laps in the main all year? So, his outright speed in the daytime, isn’t moving over to the night show. That’s weird. To no one’s surprise, Eli Tomac leads the 450SX class with seven fast laps in the main and Chase Sexton is right behind with six. No one else has more than one.

The number of positive positions (passes made minus getting passed) that Mitchell Oldenburg has gained in the 450SX class this year, which ranks second in the class. That’s great right? Well, he’s done that in just his six races! This stat is a bit of an accumulation stat, so Freckle’s six races aren’t that many. Yeah, yeah, he’s got a podium in the 250SX east series, he sits fourth in points (even with that DNQ at the opener) and that’s all well and good, but when I look at his 450SX year, I think to myself I wonder if he’s ready to be a full-time 450 guy?

Speaking of the SmarTop/Bullfrog Spas/MotoConcepts Honda team, Vince Friese had another good moonlighting day in 450SX with an eighth. I wasn’t stoked he tracked down Troll Train late and got him, but such is life. Anyway, that 13.7 is Vince’s average points scored in the 450 mains he’s done which sits him 11th overall. Please, NO ONE TELL WEEGE THIS, but it’s 1.6 points better than Justin Brayton. And I’m not saying this to shit on Hartranft, but he’s going to be seventh overall in the points at the end of this thing and Vince has 3.6 points more than the #41. All good stuff for both Friese and Oldenburg.

The points fund money for 20th overall in the 450SX class. It's exactly zero dollars for 21st. So, yeah for the privateers out here this is a big deal. There are five points separating 19th (Justin Starling), 20th (Ryan Breece) and 21st (Cade Clason). These guys have been around each other almost every main event and Cade’s DNF last week hurt his cause for sure. Keep an eye on these guys in the last two races to see who gets the cash and who’s out.

Look, we all know this column is an Alex Martin hate-free zone. I won’t have any shitting on Troll or his legacy in the sport. We only celebrate Alex over here and there’s a lot to celebrate with his career best ninth place in the 450SX main. Pretty good right? This hasn’t been “our” breakout 450SX season like “we” wanted but last week Alex led a heat, this week it’s a career best finish for “us.” I feel like week in and week out Martin should be around Brandon Hartranft (who’s having a great year), and he has at times, but not consistently enough for my liking. Still, heating up with two races to go is a good sign for the OUTDOORS!!!!!!!

Thanks for reading OBS this week, stay tuned for more of this right here at the same time! Email me at matthes@racerxonline.com if you want to chat about this or something else.