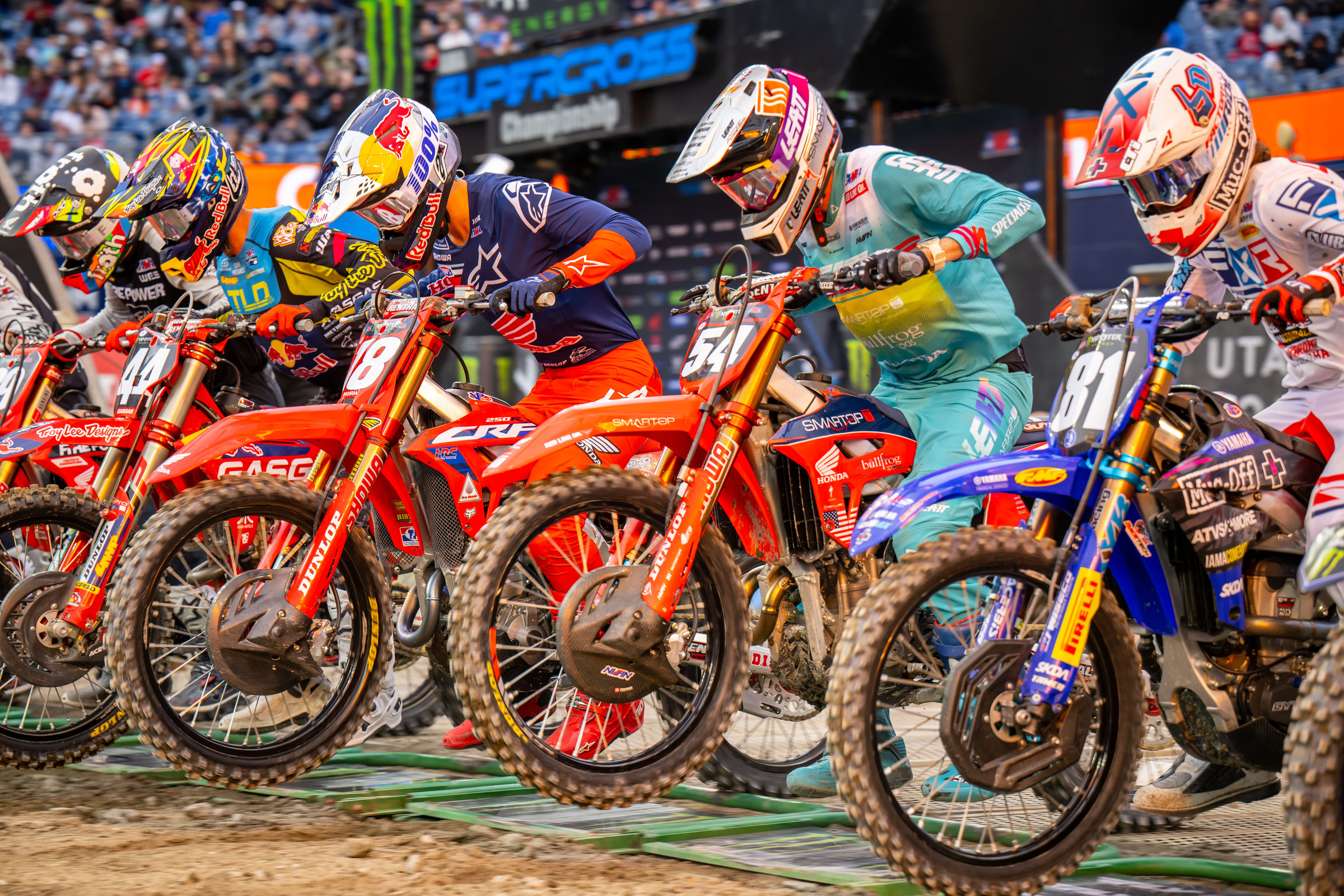 Gillette Stadium hosted to the 15th round of Monster Energy AMA Supercross over the weekend for what proved to be a wild night of racing. From the track layout to the feel of the dirt to the action in the races, a live show on Friday night, and everything in between, Foxborough had it all. As such, we fired off questions to long time professional rider Jason Thomas to hear his thoughts on some big talking points from Foxborough.

Jett Lawrence is now a champion in both motocross and supercross on a 250. What are the steps do you feel like he still needs to take before he’s “450 ready”?

It’s not so much of steps as just a natural maturation process. He’s only 18 years old and at times, you see that in his riding and decision making. He’s far ahead of most 18-year-old racers but as we saw in Arlington and St. Louis, he’s not impervious to those imperfections. I don’t believe there is anything he can do to speed up the process other than be patient and let it happen. He’s coming for the 450 class and when he does indeed arrive, look out.

The track looked like it had three different layers of loam, hard, and soft on it. How difficult is it to find the limit on dirt like that that?

Foxborough’s dirt is similar to Seattle, Toronto, and Vancouver. It has a hard base with “moon dirt” on top, mixed with rocks throughout. It’s tricky and dynamic. The track gets worse lap after lap, too. The soft stuff ends up blowing off and the hard base is all that’s left by the end of the main event. Further, the rocks make braking unpredictable.

Riders like to find their rhythm and hit the same marks lap after lap, much like they would at their home practice track. They can “zone out” and just put in the laps. Tracks like Foxborough disallow that as it’s changing too much to find that zone. Lines that are ideal on lap two could look like a war zone by lap 15. Riders are tasked with staying aware with changing conditions and constantly searching for new lines.

Does Jason Anderson’s great form in supercross this year lead you to believe he takes a big step up in motocross as well?

I don’t expect that. Could he win a moto or an overall? Sure. I don’t expect him to win multiple races and be a serious factor for the title, though. His effort for this supercross season was Herculean and also why I picked him to win A1. I had heard stories of how many laps he had been doing in preparation and also the speed with which he was doing it. It’s very difficult to mimic that effort to begin a new series. That’s why it’s so rare to see the SX champ roll into being the MX champ in the same year. Those that have been on the razor’s edge for five months typically need an exhale as summer wears on. I hate to count him out because I think he deserves better, but I am just playing the averages.

Eli Tomac backed it down and went into championship management mode. Will we see a similar ride this weekend now or does the “bigger” points spread needed to lock the title up maybe loosen him up more?

It’s really difficult to predict. This is all a mental game for Tomac. If he can manage his emotions and temperament, he can win. If he settles for disaster prevention, we will likely see only a slightly better ride than Foxborough. It could also depend on his start and how the early laps go. When Anderson got aggressive with Tomac, he instantly de-risked the situation. It was tough to watch but he’s built up such a lead, he doesn’t have to take chances anymore. I have a tough time thinking he will want to settle in front of the Colorado crowd, though. If for some reason he does turn in another mediocre ride, watch for utter domination in Salt Lake to wrap the series as he unloads a ton of pressure.

Some people were up in arms about Austin Forkner accelerating off the track and re-passing Jett Lawrence into the next corner. What did you make of that situation?

I was curious on how the AMA would react to that situation. We have seen several penalties handed out this year due to off-course acceleration. In the end, they did nothing. I think it came down to Forkner not aggressively accelerating around those jumps. I also think Jett’s title overshadowed any potential protests from Honda HRC. Had that been round one, I think they review film for a long time and then possibly hand out a time penalty. They say every point counts, but it doesn’t when titles are already clinched.

I was texting with some industry friends and their opinion was essentially, “It’s fine, Forkner wins, Jett wins the title, everybody is happy.” While I certainly understand that sentiment, there is also a lot of money at stake. For Jett, he left $30,000 on the table minimum by getting second instead of the win. There is also the PR that Honda HRC gets for winning the race, as well as any potential insurance/bonus programs that Jett and crew could have purchased. Personally, I was expecting a review of the move because Forkner made the pass immediately after rejoining the track, but it seemed the AMA was ready to move on with the championship celebration.

I think he’s on Red Bull KTM again. It simply makes too much sense. He is a podium threat and a KTM lifer (close enough). If they can agree on money, why wouldn’t they keep him? Injuries are far too prevalent in this sport to assume they will have both Aaron Plessinger and Cooper Webb healthy next season. Adding Marvin on the cheap is a great insurance play with huge upside. He’s the only KTM to win a premier class race in 2022! That sentence alone should be cause for an automatic renewal.

Pierce Brown remained upbeat with a podium despite fading late and losing a shot at his first career win. Do you think he learns a lot from that situation?

He should be upbeat. The simple fact is that Austin Forkner is one of the winningest 250SX riders ever and Jett Lawrence is on his way to stardom. My opinion is that they are simply better than Brown. There’s no shame in that. I have been incredibly impressed with PB44’s progression this year. He went from a rider that I was unsure about to a rider that will be re-signed and given a raise. He will win races in this class. He’s getting better. He’s just currently dealing with a veteran and a rising star in the way. He should hold his head high and realize he has taken huge steps this season.