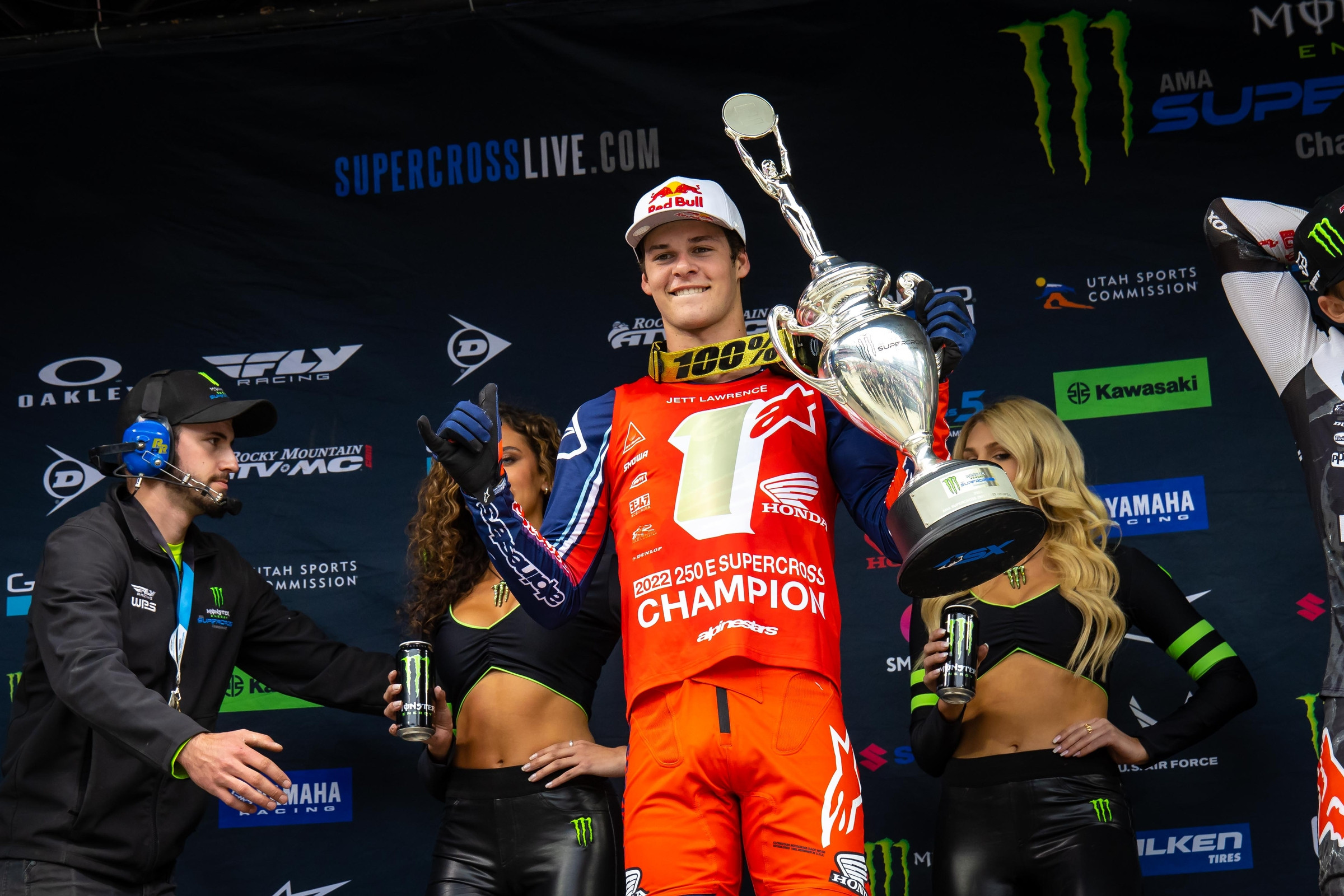 Success might be coming quickly, but to the 18-year-old Honda HRC rider, it doesn’t feel that way, because the bumps and bruises he took in supercross in 2020 and 2021 have created memories and what not to do, and he still carries those scars today. In fact, because of that, Jett feels like this supercross title means a little more to him than his hard-fought 2021 Lucas Oil Pro Motocross Championship. Supercross has caused some pain for Jett before. This year, he got the best of it.

Jett, congratulations on the championship. Your starts, man. I know I’m probably talking about a broken record here. I’m sure you’ve practiced them. You made some bike changes. You guys have worked on them. It’s definitely hurt you a little bit. Again, today I was watching you out of the gate and the guys pulled you out. How do you fix this? What are you going to do?
Jett Lawrence: Yeah, the heat race was just that loose dirt. The dirt was really gravelly today with a base to it. Pierce was next to me. Pretty even coming out, but he just ended up dropping that weight back a little bit better than I was. I was still forwards where he drove and I just ended up spinning, which sucked. Then the main event, I’m not quite sure. I think I got out okay, but I was just a bit off balance where the rear was kind of jumping in and out of the rut a bit, so I lost all my traction there which sucks. I was just happy to make it through the first turn in both races.

You had a couple uncharacteristic crashes and tip-overs in practice and stuff. There’s stress that goes along with this championship. I know that you were smiling, and you were putting that off, but what about coming into this day knowing what had to be done, stress versus reality and getting it done tonight?
To be honest, I wasn’t stressed and wasn’t trying to put it off. Definitely lucky that I was in the situation, really. I was more calm than last weekend, I can say, going into the east/west shootout, to be honest. Today the smiles weren’t fake. I wasn’t trying to cover over anything. That tip-over in the quali, it was weird. I went off and I ended up just missing my back brake, which sucked. If I would have stayed in, I would have railed the turn. I don't think I was actually stressed at all, all day, to be honest. I think it kind of helped me just have more fun with the track, because this track was such a different track from the rest of the layouts this year. I think I actually enjoyed it a lot more because it was so technical, and you had to be smart with your lines and decisions.

For you [Austin Forkner] and Jett both, that last lap was kind of what we have been waiting for all year. For both of you, how did that feel in the moment? Were you aware of the opportunity and was it like, this is my chance to go at it with this guy finally? Did either of you feel that way or was it just another lap?
Jett: I actually really liked it, to be honest. I think it almost helped me to just not even worry about the championship. I was more so excited about the actual race than the actual championship at the end, to be honest. We both were yo-yo-ing a lot. He would get a guy, then I ended up getting the guy. So, it was fun. The whoops were small, but they were still tricky. Like he said, I saw that last lap through the whoops and he’s hanging off the back of that thing. I’m like, “he’s going for it!” But I had a lot of fun. I think that has been one of my more fun races, just because I couldn’t just go catch and pass wherever I wanted, I actually had to set it up a lot more because it was not one line around the track, but that was definitely the main fast one. I tried some different lines, made some mistakes. I wish we would have had more of these because I feel like this would have made my season way more fun than it actually is. Hopefully we can do the same at the last round.

Austin Forkner: Pretty much the same. It was good battling. That’s always fun. As a rider, sometimes you’re like, “Let’s just holeshot, let’s get out front and let’s cruise,” but then there’s also the side of you that likes to battle. With the start that I had, I knew that I was going to be battling with guys and passing guys. So, it was good. It was good racing. We really all rode clean races. There was no crazy drama. Just good racing.

Jett: To go off that, it’s one of the main reasons why we get into the sport. It’s because of that close battle that we can get really close, unlike, say, Formula 1 cars. You get close, everyone backs down because their cars are so fragile, where in our sport we’re allowed to get nice and close. I think that’s what makes our sport so great. I know I can speak for all three of us up here. That’s what we got into the sport for, that real intense, close racing.

I picked fun at you earlier today for getting second in qualifying. Instead of answering like a typical 18-year-old, you showed maturity and you were like, “I don’t get paid for qualifying.” Then I followed that up and I asked you, do you think you’re the fastest 250 rider out there in supercross? Again, you didn’t answer like a typical 18-year-old. You showed maturity and you said, “There’s any rider that can throw their leg over the bike and give it to me.” Then lastly, I asked you, do you have a girlfriend? And again, you didn’t respond like a typical 18-year-old. You showed maturity. You said, “I’m focused. I don’t pay it any attention.” You left Australia, and at 18 you are now a supercross champion. What types of things had to come together for you to bring that maturity in to make it happen this year?
I would say it’s the people that surround me. Everyone says you’ve got to surround yourself by good people, and I think I’ve done quite well with that. Obviously, some of those hard hits, I think just realizing that you don’t want to keep on doing that. I think the biggest thing, I don’t ever really think I’m the best guy out there. There’s always someone. Like tonight, Austin. He was the better guy today. I think it’s how good everyone is nowadays. Anyone who’s feeling it can win. I bet you at any other races if Pierce is on, I bet you a hundred bucks he could beat me. It’s just that type. Everyone is so close nowadays that it’s just kind of whoever is feeling good that day. Obviously, biggest thing is just learning from my mistakes. That’s one of my big things that helped me mature, and like I said before, the group around me.

Steve Matthes caught up to Jett in the pits after the race for more:

Racer X: I’m old school, I always think the motocross title is harder to get because it’s more rounds and all the riders, but you’re a younger guy. Which means more to you?
Jett Lawrence: I would say supercross.

That’s depressing.
No, it’s not depressing! [Laughs] When you ate crap two times [two years] bad in supercross, it feels nicer. Outdoors, I was consistent the whole time. I proved that, it was my goal in 2020 to be consistent, and my goal in 2021 was to win the championship. I just got it, Justin [Cooper] was really close and he rode fantastic, he was consistent, and he definitely made it hard for me. I definitely showed my grit, my Australian background, I guess you could say. Where this one [supercross], I was coming in, almost with a chip on the shoulder. Last year, looking great, then a silly crash, being a 17-year-old. Then going back to the year before that, 2020, that’s probably what made me pretty famous, the endo at Anaheim 3 [crashing while battling Dylan Ferrandis for the lead]. I’d say that step has made me who I am today. Those crashes, they definitely made me the person that I am and the racer that I am today, and it’s going to make me an even better 450 rider.