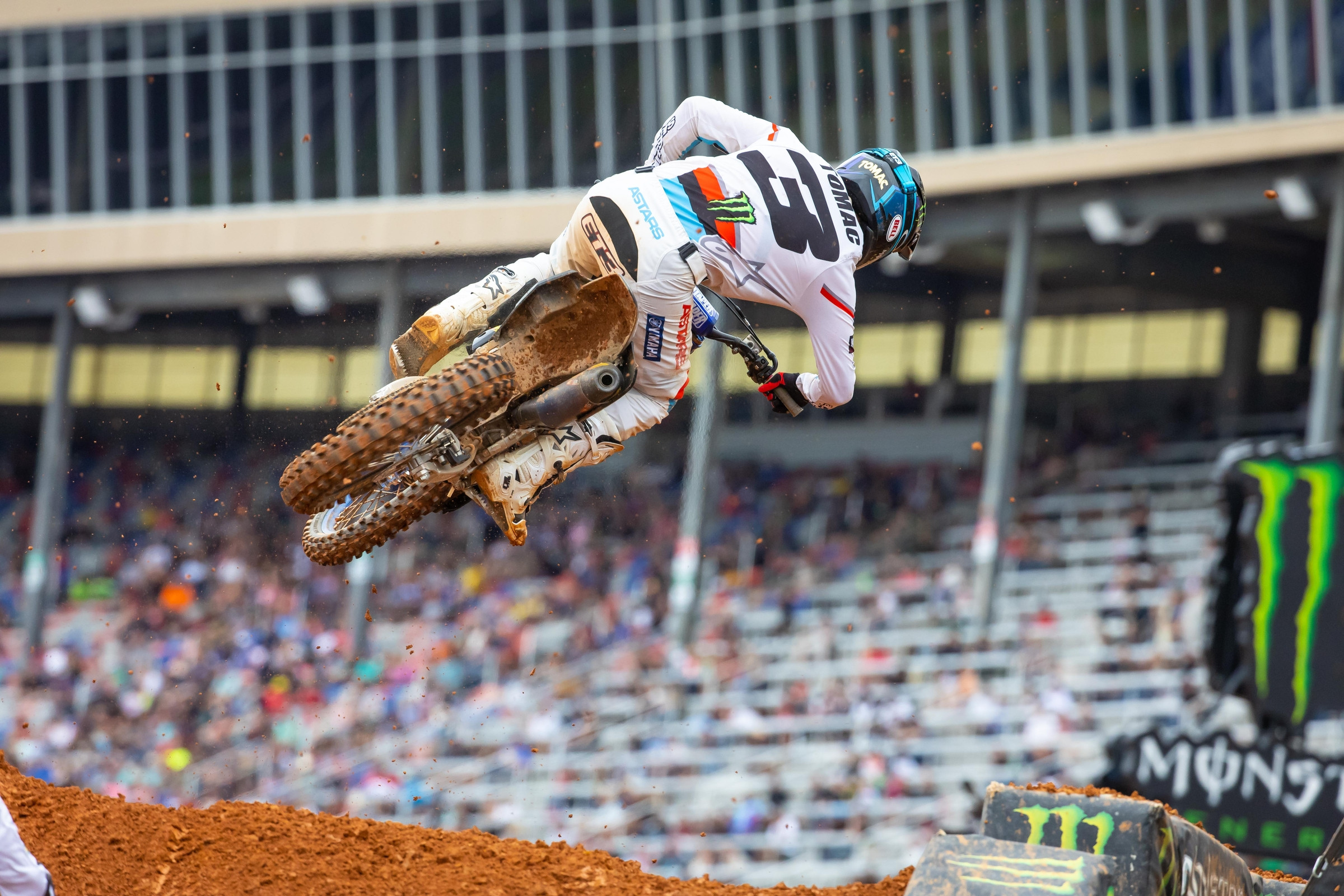 Currently there are three riders other than Eli Tomac who haven’t been mathematically eliminated from the Monster Energy AMA 450SX Championship—Jason Anderson, Justin Barcia, and Malcolm Stewart—but c’mon, Barcia and Stewart aren’t in this. Anderson isn’t really either, and with Tomac’s 53-point advantage, there’s strong chance he’ll clinch the title this weekend. The easiest math is, as long as Tomac beats Anderson, he wins the title. He can also give up a single point and still clinch but considering how far down in the order they’d have to finish for that to happen, it’s extremely unlikely. As far as Barcia and Stewart go, Tomac’s would have to give up 17 points to Barcia and 21 to Stewart to keep them alive, and that isn’t happening. –Aaron Hansel

In the 250SX East Region the math is a little simpler. The only rider still mathematically able to challenge Jett Lawrence is RJ Hampshire, but even he has a 47-point deficit. That means that Jett would have to give up 22 points to Hampshire for Hampshire to stay alive. In other words, if Hampshire takes second, he’d need Lawrence to finish in dead last. If Hampshire wins, he’d need Lawrence to finish 19th or worse to stay alive. Considering Lawrence’s worst finish of the year so far is third, Hampshire doesn’t have a whole lot of hope of staying in this thing. Expect Lawrence to earn his first 250SX championship this weekend. –Hansel

From Five to Six

Last week we ran a story listing how many different 450SX winners there have been in each season for the last twenty years. We learned five is a pretty common number, and coincidentally, that’s how many we’ve got so far in 2022—Tomac, Anderson, Marvin Musquin, Chase Sexton, and Ken Roczen. Having six winners is extremely rare—it’s only happened once in the last twenty years (2015)! But with guys like Barcia, Stewart, and Cooper Webb still winless in 2022, there’s a chance we could see that number get matched, or even exceeded, this season. Will someone step up and bump it up to six this weekend? –Hansel

Chase Sexton has seen potential wins slip from his grasp multiple times this season and it happened again in Atlanta. The Honda HRC rider was leading the main event early and looking good doing it until he made a mistake and washed out the front. Just like that, another shot at getting an elusive 450SX win evaporated. If Sexton is ever able to eliminate these small errors, he’s going to see more wins come his way. Will he keep it rubber-side-down in Foxborough, or will he let another win get away? –Hansel

With the Dave Coombs East/West Showdown happening at the finale in Salt Lake City, this weekend is the last chance the 250SX East Region riders will have to battle it out amongst themselves before things get crowded again with the addition of the western riders. In other words, if guys like Pierce Brown and Mitchell Oldenburg want to grab another podium, they’d better get it done in Foxborough because it’s going to be a whole lot tougher the next time they race. Who will take advantage of the last divided 250SX East race? –Hansel

Monster Energy/Pro Circuit Kawasaki’s Austin Forkner broke his collarbone after contact with Jett Lawrence at the Arlington Supercross and missed a month of racing. He returned last week at Atlanta and was the second highest placing East finisher behind Lawrence who was third while Forkner came home seventh. He also won his heat race in a wild fight back on the last lap. The summary of all of this is that Forkner looks just as feisty as he did before he went out with injury a month ago and the opportunity is still there for Forkner to earn his 12th career 250SX victory before the season is done. Could he make it happen this weekend if Lawrence ends up playing a bit defensive to secure the title? Time will tell. –Kellen Brauer

Twisted Tea/HEP Motorsports Suzuki’s Brandon Hartranft is now into the top 10 of 450SX standings after moving around Ken Roczen last week. He’s just two points behind Dylan Ferrandis for ninth and 13 points behind Dean Wilson for eighth and neither rider looks like they will finish the season as Ferrandis has already announced he will not return to supercross in 2022 and Wilson is still recovering from his laceration in his butt cheek from his St. Louis crash. It seems likely that Hartranft will move into the top eight in points before the season is done, but he also has to be weary of Justin Brayton who is just seven points behind him as well. Who comes out on top at season’s end in the battle for eighth? –Brauer

Kyle Chisholm was half a lap away from his first career podium in St. Louis when Mitchell Oldenburg put Pierce Brown on the ground to just beat Chisholm’s 4-4-3 scores in the Triple Crown and put the SmarTop/BullFrog Spas/MotoConcepts Honda rider on the podium instead. Chisholm didn’t skip a beat though as he moved back to the 450SX class in Atlanta and scored his best result of the season in 450SX with an eighth-place finish. The ball is still rolling then, and Chisholm will have his final opportunity this weekend in his fill-in role with Monster Energy Yamaha Star Racing to land on the box in Foxborough. –Brauer

While the 450SX title fight looks to be all but over with Eli Tomac able to clinch two rounds early this weekend, the fight for second place in the standings is still hotly contested. Jason Anderson sits on 272 points after his win last week and holds a 15-point advantage on Justin Barcia in third. Barcia is only four points ahead of Malcolm Stewart and 12 points ahead of Marvin Musquin as just 27 points separate the four riders. While Stewart and Barcia are still looking for their first wins of the season, the second or even third spot in the points would also be a big bonus for any rider in that group to bookend what has been solid seasons for each of them. –Brauer

This weekend will be the second race in a row in a string of three where the racing will commence under daylight as the “night show” begins at 3:00 p.m. Eastern this weekend in Foxborough. If anything, that could help harden the track up a bit as Foxborough typically has had some very soft dirt in recent trips to Gillette Stadium. With the daytime racing, the sun will still be beating down on the surface throughout the entire racing program and will at least harden up the dirt a bit more than if the race were ran at night where moisture can continue to come up in the cooler temperatures. We will see what type of racetrack we get when the main events start around 5:00 p.m. local time. –Brauer