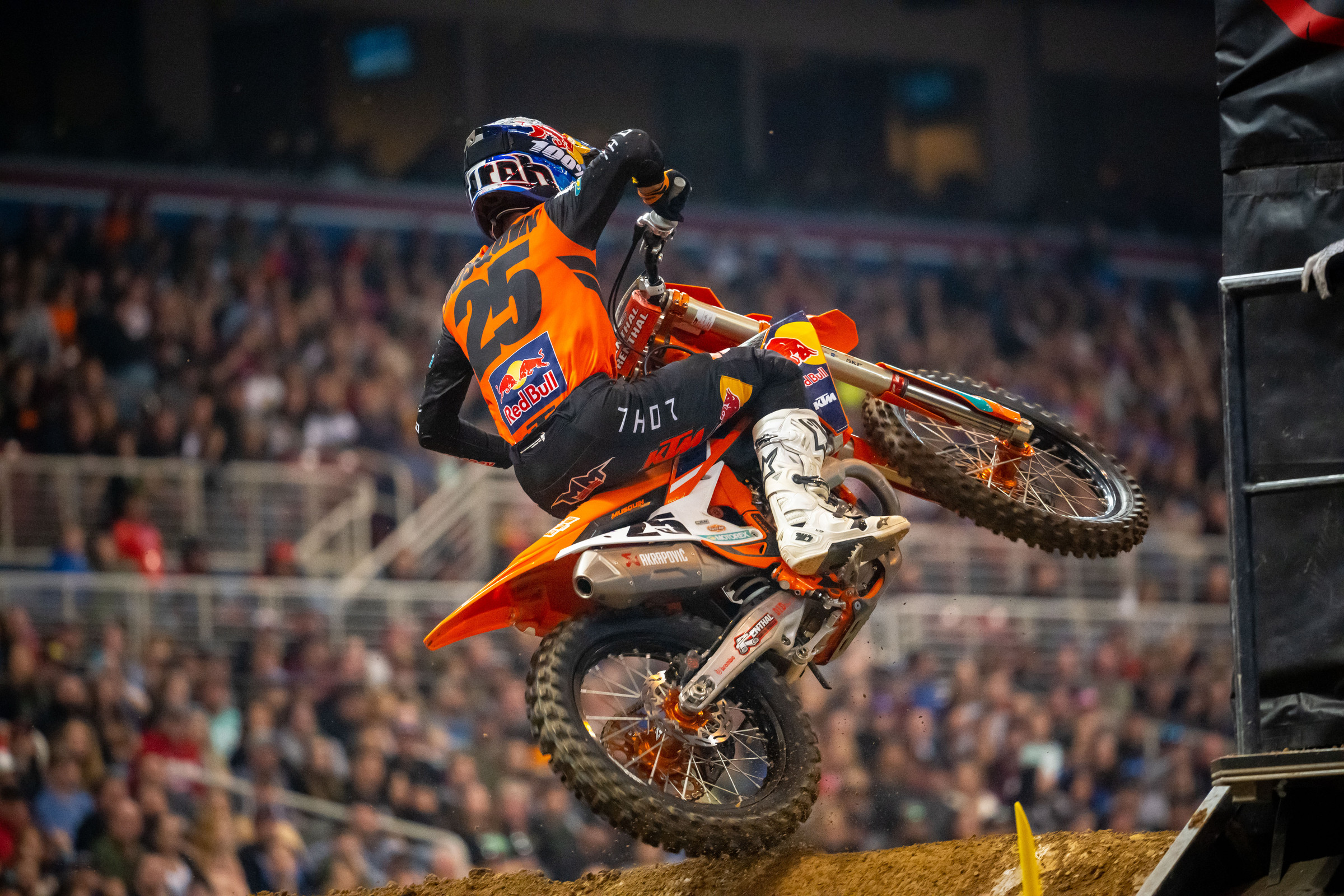 In racing terms, Marvin Musquin is getting old. He turned 32 in December, he’s had one of the longest-running relationships between a team and a rider in the sport’s history, and his 2022 deal with Red Bull KTM was announced as only for supercross, with the veteran essentially the third 450 rider on the team next to full-timers Cooper Webb and Aaron Plessinger.

That made it all appear Marvin was heading toward a career wind down, but each time we’ve talked to him about it, he’s left the door open for more racing in the future. As odd as it sounds, he actually has to go out there and earn himself a deal for the future, but he has maintained that if a good ride is offered (and Marvin has indicated that staying with his familiar Red Bull KTM team would be his first choice) he would like to do more racing. Monster Energy AMA Supercross in 2023? Maybe a look at the upcoming new FIM World Supercross Championship? Marvin doesn’t appear to want to stop, and now he’s got quite a resume bullet in his quest to earn another deal: he just won the St. Louis Supercross. That makes him one of just five riders to win a supercross this year. Will someone sign the man?

Marvin talked about it all in the post-race press conference.

Marvin, great night. You mentioned on the podium press day. I was watching yesterday, too. Throwing whips. Kind of just had that mood. What’s that from? Is it comfort with the bike? Just the week off? What kind of led into yesterday, just the way you’re feeling and carried it into tonight?
Marvin Musquin: It’s been like this pretty much all year. Different program. Training with David Vuillemin, staying in California, doing my thing. It’s a lot different than what I’ve done for the past seven years. That’s exactly what I wanted, something a lot different. You never know if it’s going to work out. I trust David Vuillemin and always wanted to have him in my corner. So, it’s been an up and down year, but like you mentioned, just yesterday, press day… I like doing press day. It’s just fun. There’s no lap times, no nothing. Just so much fun. I really wanted to carry that to race day. Triple crowns are pretty tough. You’ve got to be on it. When I was sitting on the line for the third moto, it reminded me of the Monster Cup in ’17 where like, I can’t screw up that start if I want to win. So, that’s exactly what happened. I had a good start and overall a great day.

You talked about the track and you said you liked how technical it was and it was a little bit busier. Just your thoughts overall on the soil and the track? Is this the direction that you like more when it’s a little slower, more technical?
Yeah, of course. I do try to talk to the guys that build the track. I know they don’t want to do too steep of jumps and stuff. Today this weekend just that off-camber, sand section, double, off-camber, double, double, inside… This is tough. You have to be so precise. If you mess up, then you’ve got to roll basically. We need to see more of these sections. The rhythm sections were nice, too. Amazing dirt here in St. Louis. Overall, an amazing track. I really enjoyed it.

Your results have been improving. But it’s really nothing different? It’s not like you made huge changes say over the last four or five weeks?
No, not at all. We did have a weekend off. I did take a few days off, which I’m not used to. So, it’s just been feeling good and going into race day feeling just relaxed and just ready to race. The bike has been the same as the last few weekends. No changes.

Roger [De Coster] said that this weekend you were leading the charge and it was up to you to defend the brand, with Cooper [Webb] being gone [with injury]. You’ve had a lot of responsibility this year though just in testing the bike. How do you feel about that responsibility and that role you have within this group?
I can definitely put more pressure on myself, but I know what I have to do and I know why I’m here. I’ve been by myself in the Red Bull KTM team a few times in my career, especially outdoors. So, it wasn’t so new. Unfortunately, for the brand, Cooper wasn’t here. So, definitely happy for the team and the brand to get on the top step of the podium. That’s huge.

You’re fifth in points. You have four podiums and a win. Is there any chance at all that you postpone your retirement and come back next year for one more year?
Yeah. Like I said, changing my program big time this year was a test. To change my program, to do different things to see if it helps to keep going racing, for sure. At the same time, it’s important to show myself, to prove myself that I’m still capable of doing great things.

So, you’re saying there’s a chance you could come back in 2023 in supercross? Yeah. I’d need a contract for that!

Chad Reed was in the TV booth tonight for that final race and said that your role within that KTM team has always been that Mr. Consistent guy. The two guys that were expected to win races are out, and you’re the one still there and getting a race win. How does that sit with you knowing that each year you’re kind of relied on at the back end of these seasons?
Yeah. I’ve been racing for a long time. There’s a few seasons where a lot of guys were getting hurt. It’s part of it. It shows that you have to be consistent. You have to be careful sometimes, too. You can’t just send it or whatever. In my position, to be honest, there were some races where I can’t go more, if not, it would be too dangerous. It’s important to see where your limits are. This season, it was really, really nice to be on the podium this year for a couple times. That was my goal. Now I got a win, but to be honest, it was not expected. Maybe the people around me they would be kind of mad at me, because I need to expect more of myself and believe more in myself, but those guys are really fast. They’re really fit. Everybody is working really hard. It’s just amazing to be back and winning another one. Last year, I only won one main event but it looks like this year another one. I’m looking forward to the rest of the season, be consistent and see where we end up on the championship.

Can you tell us a little bit more about your work with David Vuillemin?
Yeah. I’m really glad this worked out. I knew he was training another rider [Dylan Ferrandis] and really involved with him. I didn’t know if it was going to happen, and it did. When DV is involved in something, he’s committed 100 percent. It’s going good. We work hard, but we have good times at the same time. So, I’m happy. I’m happy to see where it’s going to lead and see how far we can go and how far we can progress.

Normally you’re a jumper through the whoops and tonight you were blitzing them really well. Can you tell us what made you feel so comfortable about doing that and what you like about riding on such a technical track?
[Laughs] Just because there was no way I could jump those whoops! So, I had no choice and I had to skim the whoops. It’s funny because this week with DV, we worked on jumping whoops and it was amazing, but at the practice track and at the racetrack it’s so different. We tried to work on it, and skimming and jumping at the same time, I know I’m pretty good at jumping but on race day, it’s hard. It’s really hard. That dirt, there’s so much traction and the way they build that hook in the whoops, it’s basically impossible to jump. I wish sometimes we could jump more, but the way the whoops develop sometimes they have a hook in them. I had no choice. I went for it and I tried to be consistent. Usually that’s a section [the whoops] where I’m losing some time, which I did again today but I was pretty consistent. A guy like [Jason] Anderson was not able to pass me in that second moto. I know he was putting pressure on me and I actually put a gap on him and I was able to ride my own race and win that second moto. So, that was just amazing. I really enjoyed the track.

Any thoughts on the future?
It feels like I still have a long way to go when I see Justin Brayton doing supercross only for many years. This year it’s kind of like a test as well. My contract is only supercross, so we’ll see how it goes for the future. I’m going to say it again, but changing my program is a huge thing this year. So hopefully it’s going to help me for the future if I want to keep racing.